For three decades, the beloved coffeehouse has been a safe space and center of community for all 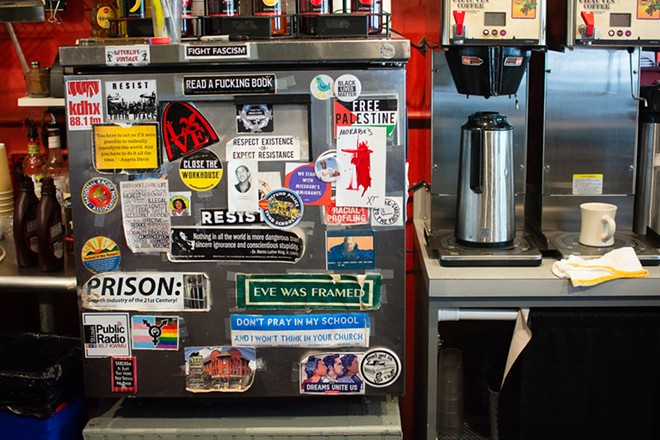 Maureen "Mo" Costello vividly remembers a particular weekend afternoon when she realized her vision for MoKaBe's (3606 Arsenal Street, 314-865-2009), the coffeehouse she cofounded 30 years ago, had come to be. It was a Saturday a few years back. On the patio, a Girl Scout troop was selling cookies to customers and passersby. Inside, a table of trans friends who frequented MoKaBe's because it had always been a safe space for them were gathered for their usual weekend get-together, and a weekly reading group, set up in their usual spot, was discussing the works of the activist intellectual Howard Zinn. It was a motley crew, and it filled her heart with joy.

"I don't know if you'd just walked in you would have noticed, but I noticed that it was all happening here, and it was wild," Costello says. "I thought, 'Isn't this so great?' This is about as community as you can get. And it wasn't my doing; it's just what the space offered. I can honestly say that, pre-COVID, there are many times I have looked around and said, 'God, this is what I had in mind and hoped for.' How lucky am I?"


If you ask anyone who has had the pleasure of patronizing MoKaBe's, they are likely to wonder the same thing. Since 1992, the iconic coffeehouse has been more than just a place to grab a cup of joe or a bite to eat. It's been a safe space, a community center, a place for activism and a source of refuge for anyone who has ever felt unwelcome and unseen. Costello humbly insists that she isn't the architect of this scene, though there is no question that the plans she put in motion with her twin sister, Kathy, and their friend, Becky, gave birth to such a treasure. 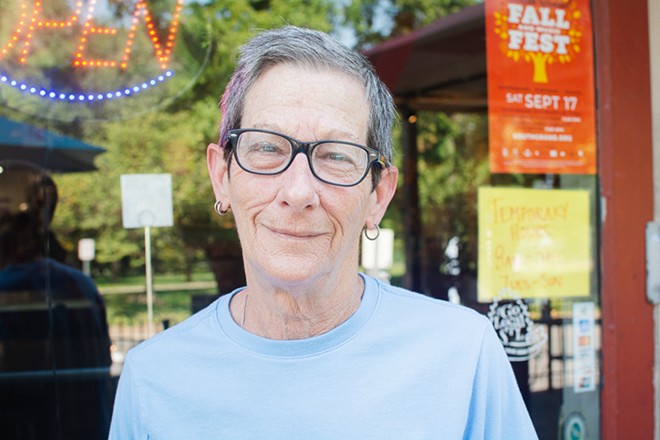 Before opening MoKaBe's together, Costello, Kathy and Becky were all working in their own individual fields. Costello was bartending at her father's pub in west county while trying to balance long evening hours with being a single mother to three kids. Kathy, her twin, worked in Franklin County as an advocate for teens, and Becky was in retail. Though they came from very different professional worlds, all three were active in the sober and queer communities and often dreamed of creating a place where their compatriots would feel welcome. In 1992, they formalized their plans and opened MoKaBe's Coffeehouse & Books in the heart of downtown Kirkwood. Costello notes that it was a lovely space, instantly embraced by those she describes as being on the "fringe of society." However, their neighbors were less than enthusiastic.

"It was a really cool space right down the street from Mike Duffy's — they got all the frat kind of customers, and we got all the alternative folks," Costello says. "I'd negotiated a one- and a two-year lease to see if it was going to work out, and after a year, the landlord said he was getting a lot of complaints about our business from the neighbors. A woman who worked the front desk at one of the businesses by us was appalled by some of our customers, and she'd report it to the landlord. I got called into his office; it felt like I was in high school, and he was the principal. He started listing this long list of complaints about what some of the unusual folk might have been doing, and all I could do was laugh. I was like, 'OK, maybe we are not Kirkwood.'"

The Kirkwood spot may not have been the right fit, but Costello and company still knew they were onto something with MoKaBe's. Undeterred, they began looking for other spaces around town and discovered a former pharmacy on Arsenal Street, just west of South Grand Boulevard. After getting a good feel for the landlord, they signed a lease, renovated the space and opened MoKaBe's in its current location in July of 1994. 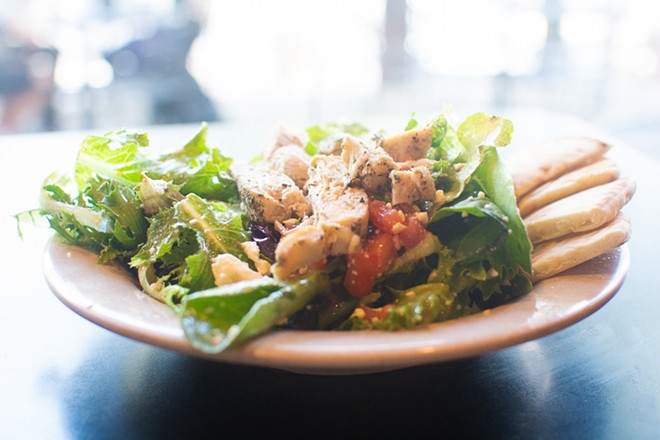 Andy Paulissen
MoKaBe's offers a variety of daytime fare, including a Greek salad with grilled chicken.

The three got rid of the books component when they opened their Arsenal location, but they added simple food made using nothing more than a panini grill, a non-commercial microwave and a small reach-in cooler. For a few years, the three ran the space together and were blown away by the response. Eventually, though, it became clear that the coffeehouse revenue could not support all three of them, so they amicably parted ways, leaving Costello as MoKaBe's sole proprietor.

In 2000, Costello expanded MoKaBe's, adding a full kitchen, loft seating and a catwalk area to accommodate even more guests. She also leaned into the coffeehouse's identity as a safe space and venue for public discourse, never shying away from activism and making it clear that MoKaBe's social consciousness was an essential part of its identity. It's made the place a must-visit for progressive politicians, a gathering place for activists, a ministry for the unhoused, a pariah that's been accused of making molotov cocktails in its basement (Costello notes they were actually first-aid kits), and most importantly to Costello, a de facto community center that has become a source of comfort and healing when people needed it most.

"We have been here when there was no LGBTQ+ community center," Costello says. "I remember when Matthew Shepard was brutally murdered. We were the go-to place. I got a phone call that morning from someone asking if they could put something together and do it at MoKaBe's. I said, 'Absolutely. The space is yours.' It was quite remarkable; there were hundreds of people who showed up because they needed someplace to be and grieve together. How lucky am I that our space could provide that for that sad and scary moment?" 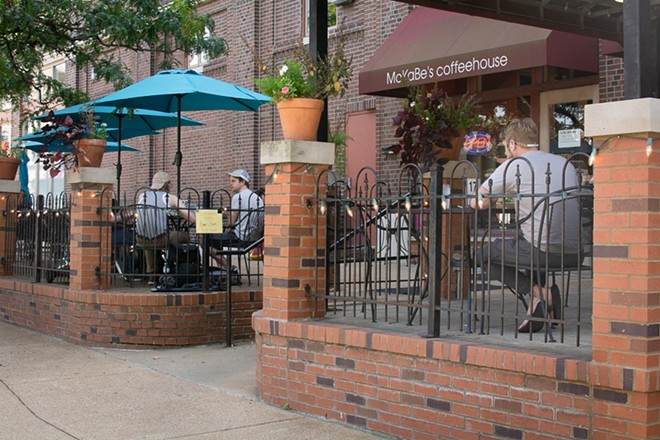 Costello got a chance to feel just how much of an impact MoKaBe's has had on the community over the last few years as her customers supported her and her staff as they navigated the pandemic. Though the coffeehouse was closed for indoor service for 17 months, regulars would crowd the patio, flood the system with online orders and generously give money to the staff who they knew were struggling to pay their bills. Costello gets emotional when she recalls the generosity — the people who sat on the patio in the middle of winter eating cold food because they wanted to give her their business, the guests who would give $50 tips on a minimal order because they wanted the staff to make ends meet. In her opinion, the government relief money may have allowed the business to keep going, but the support of the people is what kept them alive. She knows their customers offered those helping hands not because they loved her coffee, hummus or Blu Mac burger but because MoKaBe's has always been there for them — just as Mo intended.

"If walls could talk, there is so much shit that has gone on here," Costello says. "I have no idea about a lot of it. People have met here for a first date and ended up getting married. The stories go on and on. It's impossible for me to know what's gone on here, and I shouldn't. Then it's 'Mo's Place,' and that's so limiting. I just allow it to happen. That's why I always say it ain't Mo. I had some hopes and was pretty damn lucky, but it is really the space. It's all pretty damn simple: Allow people the space to be whoever the hell they are."