The St. Louis daily is losing its second courts reporter in just a few months 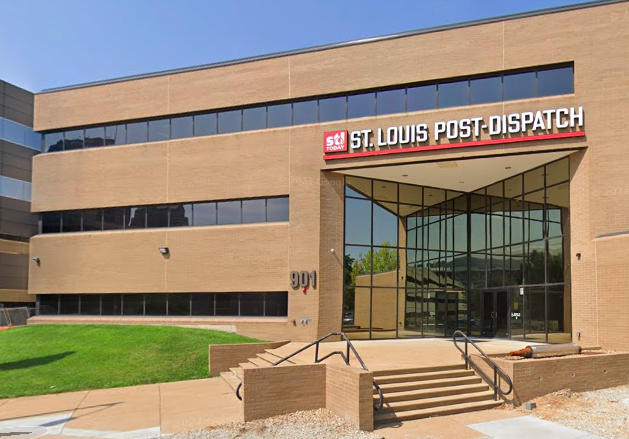 Ryan Krull
The Post-Dispatch's current offices downtown off North Tenth Street, where they relocated to in 2019 after leaving the building off Tucker they had operated from since 1959.

Two Post-Dispatch reporters have said they will be leaving the city's paper of record.

Longtime courts and policing reporter Joel Currier is leaving the Post to take a media liaison role for the 22nd Judicial Circuit Court in the city.

Reporter and data specialist Janelle O'Dea will be joining the staff of the Center for Public Integrity, a nonprofit newsroom. She plans to stay in St. Louis.

Currier has been on the law and crime beat since 2005. Major events in the region's recent history that he's covered include the 2014 unrest in Ferguson, a 2015 mass shooting in south-central Missouri and this year's spate of Aldermanic indictments.

Recently his beat has included the city, county and federal courts.

O'Dea has been on the paper's staff since 2017 and in that time published countless visual representations of everything from rainfall to homicides, as well as the perennially popular database of public servant salaries.

"I'm proudest of the stories I did for our Tipping Point series that highlighted decades-long neglect and disinvestment in north St. Louis neighborhoods, and what it does to the quality of life for those who live there," O'Dea tells the RFT.

O'Dea's coverage of depopulation in north city was extensive, and often employed a mix of data, history and personal profile. In the wake of firefighter Benjamin Polson's death in January, she also highlighted how the city's thousands of vacant buildings can become a specific kind of danger to first responders when they become engulfed in flames.

The departures come not long after veteran federal courts reporter Robert Patrick left the daily earlier this summer after 17 years of service. Like Currier, Patrick was hired by the courts he once covered to handle communications.

Post sportswriter and president of The United Media Guild Jeff Gordon says that he isn't sure if O’Dea and Currier’s positions will be rehired. "The decision comes from Davenport," he said, referring to the city in Iowa where Lee Enterprises, the Post's parent company, is based.

Gordon says the departure of Currier and O'Dea are "obviously two big losses." He referred to them as an "outstanding data reporter and a phenomenal court reporter."

"How do you replace that experience and, in Janelle's case, that expertise?" he said.

The two departures are happening amid the backdrop of Alden Capital trying to buy Lee Enterprises. The New York City-based hedge fund is notorious for gutting newspapers. Things have been quiet on that front in the past few months, but the specter of hostile takeover looms. Meanwhile, new editor in chief Alan Achkar has been mixing things up, eliminating theater reviews and moving from two full pages of daily comics to a half-page. Food columnist Dan Neman has also been moved to a new role writing about business.

Gordon tells the RFT there's no indication layoffs are coming to the Post.