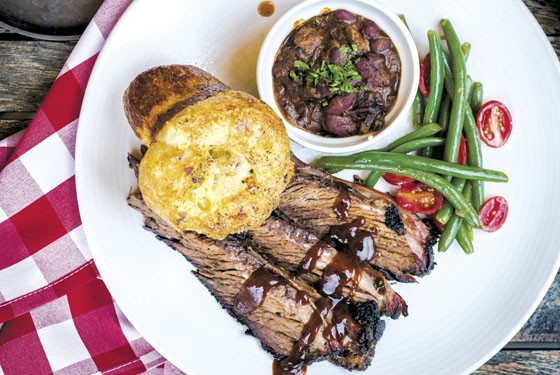 Jennifer Silverberg
Soon you'll be able to pick up food from Oh Hey! Barbecue from the ease of the grocery store.

Imagine this scenario: You've just ground through a whole day at the office, and you're dragging hard. But you still have to go to the grocery store for a few items and, Shoot, you've got to feed your family tonight, too.

But instead of running through the store and then running home and cooking up something slapdash, imagine you could just pick up a full dinner, shop a little more leisurely and then be a hero by bringing home a hot meal.

That vision above — that's what Salt + Smoke owner Tom Schmidt thought of when he was first conceiving of Oh Hey! Barbecue, a counter-service dining concept that will open within the Kirkwood Schnuck's Food Hall (10233 Manchester Road) this fall.

"[You won't have] to worry about cooking and cleaning and all that stuff before bedtime, the chaos that is parenthood," Schmidt says. "There's a lot of families in Kirkwood. I think it's just a really great service, and we're excited to kind of be that solution for people."

Oh Hey! Barbecue will fill the spot formerly held by The Shaved Duck. It will offer some classic Salt + Smoke items such as the brisket and white cheddar cracker mac. But it will also be a chance to try out some new items that will be specifically designed for the concept such as baby back ribs, smoked turkey, a creamy coleslaw, onion rings and a mustard-based potato salad.

Oh Hey! began with a phone call from Schnucks, asking if Salt + Smoke would be interested in joining the Food Hall. Schmidt says that when "one of the most iconic and beloved companies in the Midwest" called, he jumped at the opportunity. The initial challenge was trying to figure out how to adapt the large-scale Smoke + Salt concept to a small space.

He decided he wouldn't. So Oh Hey! was born instead.

"It's just a little bit more fun and casual and playful," he says. "But as when we opened Salt + Smoke, obviously, we absolutely love everything we do there."

The new spot will bring Salt + Smoke's food to Kirkwood for the first time, and Schmidt anticipates that the smaller operation will prove easier to staff than the full restaurant.

He's interested in seeing how the smaller concept does and might develop other smaller ventures, in addition to expanding his main chain, in the future.

"You've got to walk before you run," Schmidt says. "When we make barbecue, I think people really like to eat it, so I'm confident people will love this."