Wake and Bake with Missouri's Own Marijuana-Infused Coffee Pods 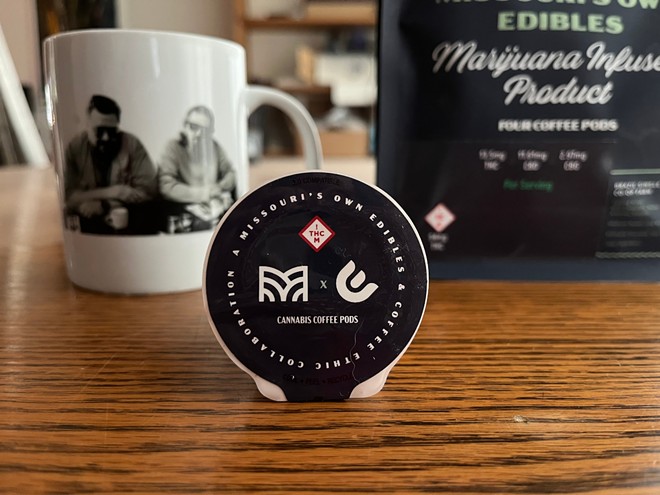 For as long as I've been drinking the stuff, I've enjoyed coffee with my weed. On its surface, it's a quizzical preference; why add an upper into the mix when the entire point of smoking weed is to send oneself into a calm, relaxing state? Coffee, when consumed in too high a dosage, can be anxiety-inducing, producing a jittery feeling that seems poised to produce the sort of paranoid high you get when you smoke too much and end up hanging onto the side of your friend's kitchen table in a panic because you can feel the earth moving through the solar system.

But combining these two loves — what I've long referred to as my Jamaican Red Bull and vodka — does not produce such effects, at least in my experience. For some reason, a steaming cup of coffee after a fat joint has always felt so comforting. The warmth from a mug held against the chest while curled up on the couch is less about catching a caffeine buzz than the joy that comes from taking the time to savor a cup. We don't often get the chance to do this, as our culture sets us up to consume the beverage on the go as a pick-me-up. Taking the time to do so is a rare treat.

For these reasons, I was curious when presented with Missouri's Own Edibles' new marijuana-infused coffee, a product that basically takes the two best things in the world and marries them in a K-Cup-style pod. Using fair trade, ethically sourced beans from a Brazilian co-op roasted by Springfield-based roaster the Coffee Ethic, Missouri's Own adds nano-emulsified sativa extract to create a product that, according to the packaging, lends itself to a "uniquely attentive high."

The cannabis-infused pods are as easy to use as any regular K-Cup and come in a package of four. After popping one in and hitting the brew button, I was immediately treated to the soothing aroma of fresh coffee. I did not expect the infusion to change the smell, but I was curious about the taste, assuming it would change the flavor. This wasn't the case. Instead, this presents as a solid cup of joe with nutty undertones characteristic of its Brazilian origin. The medium-roast coffee is smooth, though as the cup cools, you start to get a little front-of-the-palate pepper, presumably from the weed. I'm a cream-and-sugar coffee drinker (yes, I'm a trash person whose preferences denigrate the hard work of farmers, roasters and baristas); with those components added to the cup, the already subtle undertones from the weed dissipated, revealing a rich, almost almondy taste.

Missouri's Own Edibles instructs those using its marijuana-infused coffee to "start low and go slow." This translates to a quarter-to-half-cup dosage, which is difficult for this hardcore coffee drinker. I split the difference and ended up with about a one-third-cup serving and began feeling the effects after about 15 or so minutes. At first, they produced a pleasant front-of-head tingle that made me think I was in for a significant buzz. However, they wore off pretty quickly — within about 25 minutes — so I refilled the remaining two-thirds from the thermal container I'd been keeping it in to prolong and intensify the effects.

The low-key nature of the high, even at a full cup, was surprising, considering the combination of caffeine and sativa; never was there a moment when I felt that I would be incapable of going about my daily activities. Interestingly, the cannabis-infused coffee also did not induce any strong urge to consume Dean's French Onion Dip and an entire bag of Ruffles. In fact, I felt no munchie-like effects, though on a Sunday morning, enjoying a cup with some fresh-from-the-oven cinnamon rolls sounds like the closest thing to heaven. For that level of effect, though, go with a full cup right out of the gate. Or, just smoke a few bowls, brew a pot of regular coffee and save Missouri's Own's pods for filling your Yeti on workdays.