The Chesterfield Valley restaurant offers guests a trip to another place and time. 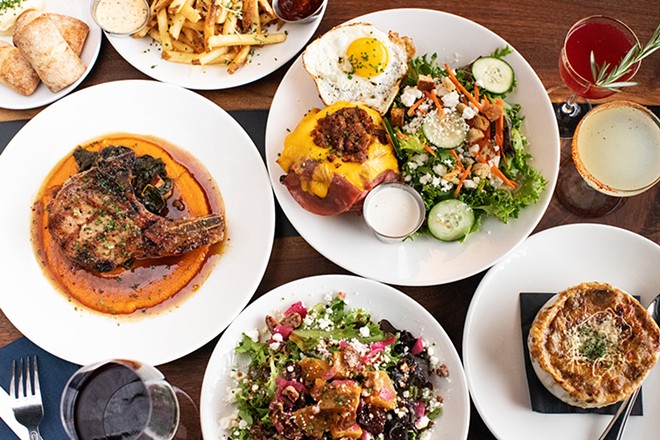 Mabel Suen
Westchester takes diners from a Chesterfield strip mall to another era.

Knowing the résumés of the parties involved in Westchester (127 Chesterfield Towne Center, Chesterfield; 636-778-0636), I expected a good meal. What I didn't expect was that partners Brian Herr, John Cowling and chef Matt Glickert have created some sort of wormhole that allows them to bend space and time to transport diners from a banal west-county strip mall into the sort of gilded, speakeasy-style dining room you'd find in 1920s Detroit.

From the outside, expectations are tempered thanks to Westchester's placement: smack-dab in the middle of an elongated crescent of businesses ranging from a title company to a testosterone clinic, outfitted in the non-offensive colors and stonework characteristic of modern shopping plexes found in Anywhere, USA. Considering Westchester's beige facade, I assumed this aesthetic would carry through when I stepped through the front door. It did.

But then I opened the second set of doors and was greeted with such a striking scene, I audibly gasped. Dark and moody, the little light illuminating the dining room comes from thin, brushed brass fixtures on each table shaped so that they cast the lamp's glow downward, as well as swirled-metal chandeliers and a couple of wall sconces. Woodwork is dark — not the espresso of 2000s-era builder basic kitchens but the deep chocolate of 100 percent cacao — including the gorgeous bar that takes up the left side of the shotgun room. You know it was recently built, though it magically has the feel of a vintage piece and is made even more stunning thanks to the deep, peacock-blue leather chairs that line it. It's the same color and material of the semicircle banquettes in either corner of the room, as well as the seat portion of the chairs that surround the room's wooden dining tables.

That feeling you get when you see a movie in the daytime and are blinded when you walk out into a sunny afternoon? Westchester is that in reverse. 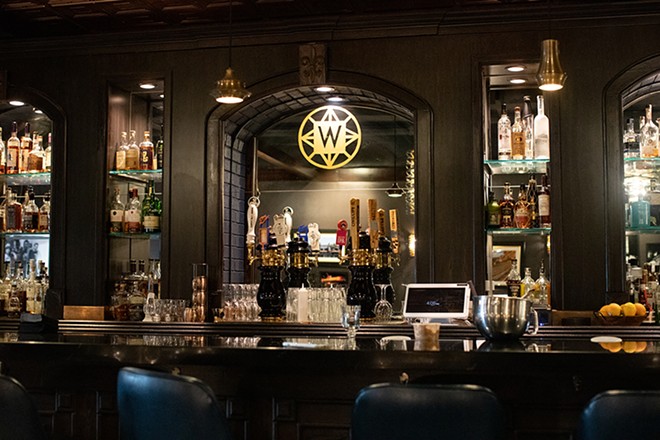 Mabel Suen
The vibe at Westchester is that of a 1920s Detroit steakhouse and bar.

Glickert understands the preconceptions attached to strip-mall dining, but he was up to the challenge. Born and raised in Chesterfield, Glickert is well versed in the soul of the area; he experienced it as a regular at the now-shuttered west-county wine bar Naked Vine. Herr, who owned Naked Vine, was a knowledgeable wine-and-spirits professional who created a welcoming atmosphere that attracted a host of interesting characters like Glickert, Cowling and a handful of other folks who would become friends over their years patronizing the place.

When Herr broke the news that he would be closing their watering hole due to the challenges associated with running an in-person business during the COVID-19 pandemic, the group jokingly asked one of their fellow regulars, who was in commercial real estate, to find them a place. When he took them up on their request and presented them with the storefront that would become Westchester, they couldn't say no.

The group may have done an outstanding job on the aesthetics of Westchester, but Glickert's culinary prowess breathes life into the restaurant. A student of the revered St. Louis chef Bill Cardwell, Glickert has spent the last 17 years immersing himself in farm-to-table dining, even before those words were a thing. Under Cardwell, he learned to pay homage to farmers and the area's seasonal bounty through his cooking, and he carried that philosophy with him as a culinary school extern at Gerard Craft's Niche and Taste, at Sugarfire Smoke House and back under Cardwell at BC's Kitchen. You hear Cardwell in Glickert's ear on such dishes as the roasted beet salad, which pairs delicate local greens with a medley of firm golden and red beets, luscious goat cheese, vibrant pickled onions and seasoned pecans that combine to create layers of texture. 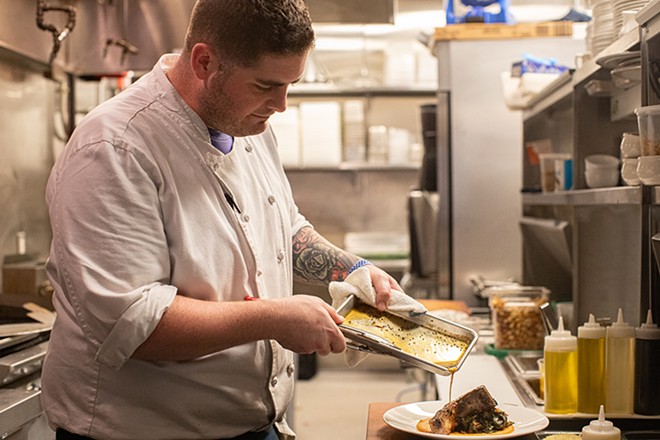 Westchester's onion soup, too, is a classic pairing of beefy onion soup, a sourdough crouton and Gruyère, but Glickert's technique transcends this dish past any old French onion soup. The liquid has an intensity of sweet onion and beef stock flavor, but it's so delicate in texture you wonder how he can fit all of that power into something so light. The broth on his Prince Edward Island mussels dish is equally impressive. The white wine concoction, infused with the mussels' sea flavor and a whisper of tomato, is meant to complement, not cover up, the fresh shellfish. Hunks of housemade bacon add a layer of gentle smoke, evoking the beauty of smoked bivalves without hitting you over the head.

Glickert's deft touch extends to the dinner menu. Chicken marsala, so often presented as a gloppy, cloyingly sweet-sauced plate of mediocrity, is savory and restrained at Westchester. Here, a locally raised skin-on chicken breast is placed atop perfectly browned gnocchi and covered in a delicate sauce that is more savory and delicate than what's typically thought of as marsala sauce. Kale and local tomatoes complete this comforting dish. 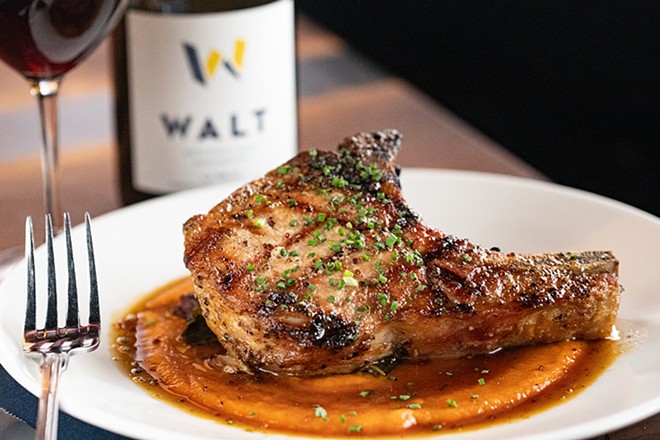 Pan-roasted halibut is paired with silken butternut squash puree, shaved Brussels sprouts and cubes of housemade bacon that is a beautiful balance of sweet, earth and smoke; the fish itself was slightly overcooked (a factor I can't gloss over because of its price point), though I do bear some of the blame for having to hold the walnut brown butter that would have usually been used to finish the fish. A prime dry-aged bone-in strip steak is perfection of the form, cooked to a flawless medium rare, and the Chef's Burger is an outstanding, upscale neighborhood restaurant offering, made from deeply savory Wagyu beef and topped with bacon jam, tobacco onions and aioli. All are worthy offerings, though the showstopper is the pork rib chop, a thick, bone-in slam of tender porcine beauty finished with a maple bourbon glaze that tastes like distilled autumn; it's a warm, comforting taste amplified by slow-cooked greens and sweet potatoes.

Westchester's atmosphere and menu are delights on their own, but the restaurant's bar program is what drives home its luxe vintage vibe. This goes beyond the sparkling, notched barware and mustachioed and vested barman who stirs flawless bourbon cocktails with a twisted, elongated spoon like someone from an old-timey movie. The scene adds to the mystique, but the beverage situation at Westchester belongs in any conversation on the area's premier bars thanks to a cocktail list developed with the help of the esteemed Ted Kilgore of Planter's House, as well as a shockingly sizable wines-by-the-glass list. Sipping a spot-on rye Manhattan and noshing on a bone-in, dry-aged steak, you can't help but feel like you've been transported not simply to another place but to another era. That this can happen in such an unexpected place is not just good restaurant know-how — it's magic.