Taqueria Morita Will Move Into Winslow's Table This Winter Taqueria Morita, the newly opened outdoor Mexican restaurant, will move inside for the winter.

Chef Aaron Martinez says that Taqueria Morita, which has been located on a patio outside Vicia in the Cortex district, will call Winslow’s Table its home for the next few months. Taqueria Morita will start serving dinner on October 26.

After opening just five months ago in May, Taqueria Morita quickly built a following for its Baja-infused meals and cool beach-style vibe. But with chilly days approaching, the restaurant didn’t want to spend an entire winter closed. 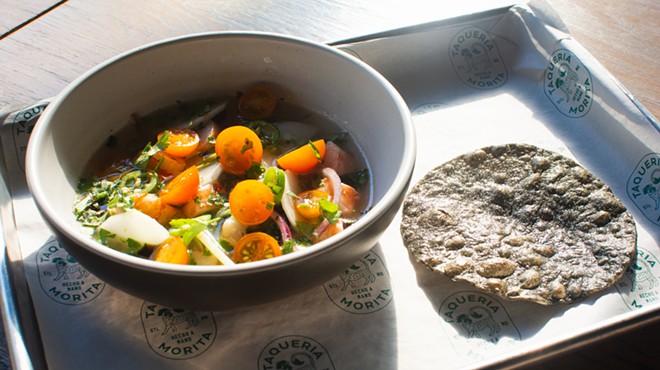 Vicia's Taqueria Morita Serves Baja-Style Edible Bliss: The restaurant is one of the area's most thrilling destinations for regional Mexican cuisine

They reached a deal to share Winslow’s Table in University City, which will only serve breakfast and lunch, allowing Taqueria Morita to take over at night.

"I'm just excited to try a different neighborhood," Martinez says. "Especially because Vicia and Taqueria Morita were not in a neighborhood. So I'm kind of curious to see how that's going to change business."

The new location will also come with a few tweaks to the menu. Martinez says they’ll keep staples like the fish and carne asada tacos. But new food will be on offer as well, such as a fried chicken torta and hot dogs wrapped in bacon.

Martinez says he draws inspiration from Empellon Taqueria, the New York City eatery that has multiple restaurants, each with its own menu and feel.

“It’s fun and it gives the guests a different experience at each restaurant,” he says of Empellon. “So [we’re] trying to see if maybe that's something that we possibly could do. Just give people different iterations of what the Taqueria Morita could be.”

The restaurant won’t live inside forever, though. As the weather starts to warm up in the spring, the plan is to return to serving up tacos on the patio outside of Vicia.