Midterm Election Guide: Wagner and Gunby Face Off for Congress

VIA TRISH GUNBY, FLICKR/GAGE SKIDMORE
Trish Gunby and Ann Wagner are both vying for a U.S. House Seat next week.

Ann Wagner has served Missouri’s Second Congressional District in the House of Representatives for nearly a decade. But holding the seat hasn’t been easy. She has fought off two strong competitors in 2018 and 2020, escaping with just over 50 percent of the vote. The close victories made her seem like a vulnerable candidate –– but that changed during the redistricting process. That’s when the Second Congressional District added Franklin and Warren counties, which voted more than 70 percent for Donald Trump in 2020. Trish Gunby, a former state representative from Missouri’s 99th House District, will take the first crack at Wagner in the newly drawn district. Bill Slantz will also run for the Libertarian Party. 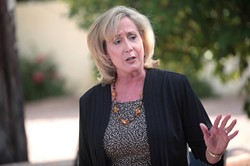 Currently: The incumbent and U.S. representative for Missouri’s second district

Bona fides: A St. Louis native, Wagner has been in politics since the 1990s. She has held the Second Congressional District since 2013. In 2005, George W. Bush appointed her ambassador to Luxembourg. This was probably a result of the extraordinary gains the party made in Missouri when Wagner was chair of the Missouri Republican party from 1999 to 2005. During that time, the state went from purple to red and gained control of the executive and legislative branches. She also served as co-chair of the Republican National Committee.

What critics say: Critics will claim Wagner transformed from a once moderate Republican to a MAGA faithful. Before Trump was elected, Wager said he shouldn’t be allowed to run for office after his Access Hollywood scandal. Afterwards, she supported the president, voted against impeachment and voted to repeal ObamaCare. Wagner also doesn’t support abortions (except in the cases of rape, incest and danger to the mother’s life) and has introduced a lot of anti-abortion legislation. She did vote against party lines to protect interracial and same-sex marriage in 2022. She also voted to certify the 2020 election results.

Platform: You would be forgiven if you thought Wagner was running against Joe Biden. She rarely mentions her actual opponent Trish Gunby. Instead, like most Republicans, she loves to talk about how Biden caused inflation, takes too many vacations and is bringing about the end of the world.

Best ad: Wagner’s most recent ad, titled “Kitchen Table” shows her, quite literally, driving around with a kitchen table in the back of a pick-up truck. “Public servants need to listen to you,” she says in the ad. “Not the liberal mob. People care about kitchen-table issues, like the skyrocketing prices of groceries and gas. And now, Biden has you paying for someone else’s college loans. Let’s stop their madness.” Ironically, one of Gunby's favorite talking points about Wagner is that she has not held a town hall for her constituents since she took office.

A long-shot candidate: The odds of Gunby winning with the newly drawn Second Congressional District are looking slim. FiveThirtyEight, the statistical analysis site that looks at polls from across the country, projects Gunby has less than a 1 percent chance. But Gunby previously defeated two Republican candidates in the 99th district. And now, she says, she’s going for the “trifecta.”

How does she plan to defeat Wagner? Going door-to-door with voters. “When you know they're voting for more progressive ballot issues, but then they're not voting for progressive candidates, I think it's up to the candidate to connect the dots,” she told the RFT. “The way you do that is not by doing tons of negative mail and ads. It's by — shocking — talking to voters.”

Political positions: She disagrees with the overturning of Roe v. Wade, supports the legalization of marijuana and would vote for increased gun control.

Favorite talking point: Ann Wanger not showing up to town halls. Gunby has dubbed her “Absent Ann” and even has a section of her website titled: “How long has it been since Ann Wagner held a town hall?” The answer is 3,590 days and counting — a.k.a. zero town halls since being elected to the House.