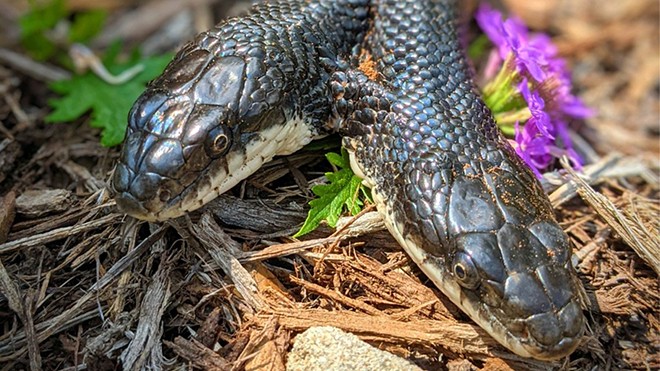 File photo of a two-headed snake.

This past weekend the snake trade show Midwest Venom Fest — which, as the name suggests, features venomous snakes — ended earlier than scheduled when an Egyptian cobra went missing.

The event went smoothly on Saturday, but on Sunday morning a vendor noticed that a cobra of his wasn't in the container it should be.

"The Egyptian cobra is one of the largest cobras on the African continent and one of the most venomous in the world, with toxins capable of fatal bites," according to the website for the Virginia Aquarium and Marine Science Center.

A search for the missing creature came up empty-handed.

Fox 2 News reported that the organizers and police believe the snake was stolen rather than escaped.

“They’re all in sealed containers. That’s what’s making it very difficult to believe that this was a mistake,” Micky Meyer of Show-Me Reptiles, an event organizer, told Fox 2. “The snake didn’t put the lid back on, and the snake didn’t move its container two feet.”

There were between 200 and 300 snakes at the event, Fox 2 reported. The rules of the event stated that snakes were not to be let out of their containers.

The Venom Fest event was previously held in Festus, but the Festus City Council voted to not allow the event back, which is why it was held at the Tri-County Sports Center in Moscow Mills this weekend.

And at least one Missouri man says he's not so sure about the theft theory.

Vincent Price operates Vincent Price Venomous Exotics and describes himself as a "huge advocate" for safety in the hobby.

"The average Joe should not be able to walk off the street and purchase an exotic, venomous reptile without any experience, proper permits and proper knowledge," Price tells the RFT.

At events like Venom Fest, Price says each snake is supposed to be kept inside two containers. Because the missing snake's container was found empty, whoever stole it would have had to open its container and transfer the animal to another, rather than just swiping the container itself with the animal inside. That makes no sense to Price, who suggests negligence is instead a likely factor.

"It would make a lot more sense if the entire container was missing," Price says.

He adds, "When it comes to venomous snakes, you don't just pocket them."