Thompson violated his supervised release twice over the summer 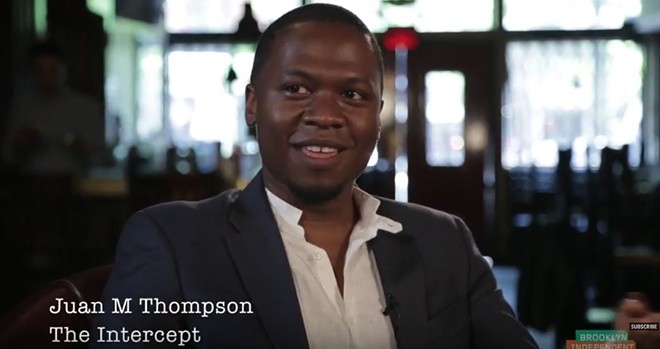 Image via BricTV
Juan Thompson, shown during a video segment, was building a career as a sharp-tongued journalist before he was fired.

Juan Thompson is headed back to prison.

The 37-year-old from St. Louis attained infamy in 2016 when, as a reporter for The Intercept, it was revealed that he fabricated quotes and sources on multiple stories.

One of the most egregious fabrications happened in the wake of the Emanuel AME Church shooting in Charleston, South Carolina, when Thompson created out of whole cloth an interview with shooter Dylann Roof's cousin, Scott Roof. Family members contacted by The Intercept said they knew no such family member.

Thompson was the subject of February 2015 RFT cover story chronicling his fall from grace. In the wake of that story, Thompson harassed its author via email and used fake accounts on Twitter to repeatedly falsely accuse him of rape.

In March 2017, the FBI arrested Thompson after he made bomb threats against eight Jewish Community Centers.

The bomb threats were part of a revenge scheme against an ex-girlfriend. Many of the threats were made in her name, but several were also made in Thompson's name to make it seem like he was the one being framed.

This was part of a longer campaign of harassment that included reporting her as a pedophile to the National Center for Missing and Exploited Children and telling her boss in New York that she was arrested for drunk driving and sued for spreading STIs, according to FBI reports.

In federal court in New York, he was found guilty for making the threats and for cyberstalking. He received a five year sentence.

Federal prison records indicate Thompson was released in December 2021, and his supervised release was transferred to the Eastern District of Missouri in March of this year.

According to court filings, Thompson "evaded" his court supervision in June and July by "making false claims of being hospitalized."

A judge sentenced him to four months in prison.