One of St. Louis’ wealthiest suburbs is about to masquerade as blighted — because it can 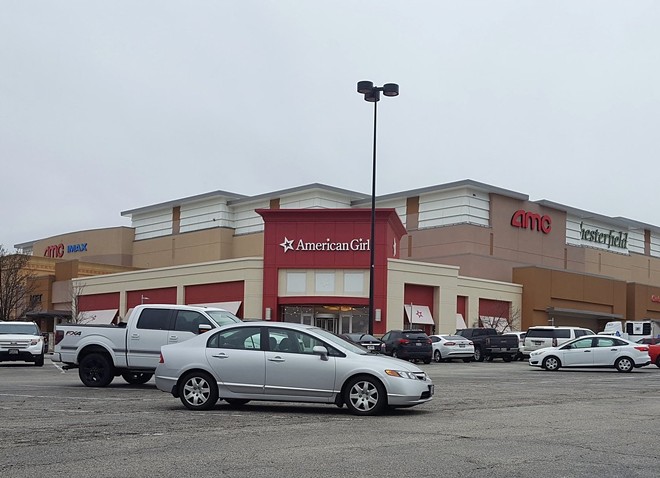 
Here we go again. It’s the city of Chesterfield’s turn to spin the wheel of the fortunate.

Prominent local developers have proposed a massive $3 billion project for the 216-acre area around Chesterfield Mall — but only if $300 million in public assistance in the form of tax increment financing is forthcoming. That claim sounds a bit rich, pun intended.

Chesterfield’s median household income (as of 2019) of $117,668 is more than doubled the state average, according to city-data.com. The median house or condo value of $409,412 is nearly two-and-one-half times the statewide figures.

Is this the sort of community where developers need to be subsidized because they’re taking on investments in areas that — to borrow the current term of art — are “blighted”? And what is it costing entities that are foregoing revenues because of the subsidies?

In a letter to the city, the Parkway School District projects a “total loss for our community, schools and taxpayers estimated at over $220 million [over] the next 20 years” if the TIF is approved. The district argues that new residential units created by the project would require the district to educate about 835 new students — and thus need to construct a new school at a cost by the year 2030 of $16 million annually.

The city contests Parkway’s projections, arguing its new developments would add fewer than a third as many students. But the details are for the local interests to battle out.

This is part of a much larger story. The abuse of TIFs like the one proposed in Chesterfield has created catastrophic consequences across the nation, and the St. Louis region is among the most afflicted.

TIF financing is complex, but the concept is simple: A local government entity attracts critical development — that otherwise would not occur in the open market — by directing the project’s future tax revenues back into the project, lowering costs for developers.

Basically, a TIF taxing district is formed, and the value of its real estate for purposes of taxation is frozen at year one. If and when the project receiving TIFs creates greater property tax values, those incremental taxes are diverted to financing or otherwise subsidizing the project that presumably made it possible.

In theory, everyone wins. In reality, everyone loses, except the developers — and perhaps those who might benefit from having helped them make a lot of money.

At their best, TIFs present a wonderful economic development tool. For example, a city might be able to revitalize a barren, abandoned or otherwise troubled area with an exciting project that brings new vitality, revenues, jobs, growth and enhanced safety to its residents. Since the new property tax revenues that support the project would not have existed had it never existed, then no one is out a dime.

But there’s an elephant in the room and peanuts everywhere. Once TIFs are allowed to be used to subsidize developers in places where development would have happened without such subsidy, all hell breaks loose.

And it has, in the St. Louis area and nationally. TIFs have become a corporate entitlement program more than an economic development tool. The first question any developer asks any locality when contemplating any sizable project reads as follows:

“How large will my incentive package be?”

The bastardization of TIF policy has become a national catastrophe. At the heart of the problem lies the distortion — or outright abandonment — of something called the “but for” test that presumably underpins TIF policy.

That test was intended to impose a critical hurdle to the issuance of TIFs: “But for the proposed public subsidy, the proposed project would not be possible.” That is generally related to declaring an area “blighted.”

If you’re an aficionado of creative writing, I commend to you the website of the Missouri state auditor, wherein one can peruse all of the TIF projects approved in the state. You’ll find some compelling fiction in cases where the “but for” requirement is addressed.

The bottom line — literally and figuratively — is that developers and local governments have become quite adept at the art of adorning pigs with lipstick. In their defense, it requires a certain degree of literary license to convey convincingly the concept, “I must have millions of public dollars if I’m going to be expected to make millions of private dollars.”

The fatal flaw in the theory of TIF policy is that it requires the political class to exercise a degree of restraint with regard to enforcing the “but for” test judiciously and with integrity. In the real world, that dog won’t hunt.

There are multiple reasons for this — some benign, some corrupt, most somewhere in between. Most public officials in cities like Chesterfield are merely trying to do what’s best for their own communities. They often face structural problems that make it nearly impossible to say no to TIF projects that seem absurd on their face.

Chesterfield’s city government is solely dependent upon sales-tax revenue for its funding at this point, and when a major revenue driver such as Chesterfield Mall goes belly up, that can torpedo the municipal budget. A wealthy community can still have a strapped government, especially since wealth and aversion to taxation are quite correlated in America these days.

Throw in the fact that other wealthy suburbs such as Des Peres have violated the spirit of TIF funding by blighting areas that are cartoonishly not blighted — with developers then invoking the classic kids’ “Why does he get a bigger lollipop?” argument to its rivals — and it’s not difficult to understand how TIF abuse becomes a runaway freight train.

There’s also a cannibalization effect of TIFs within a community. A defender of TIF recently argued to me that the TIFs for outlet malls in Chesterfield Valley showed how important they were as an economic tool, with no sense of irony of how these might have hastened the demise of Chesterfield Mall.

Nationally, public school districts always take the brunt of TIFs. They see holes blown in their budgets at TIF commissions on which they have just token representation. Then they’re left to make painful cuts to education or raise property taxes on their own constituents — often the same people whose cities have diverted funds that should have gone to the schools. Or both.

That’s precisely the situation facing Parkway today (and Rockwood, to a much lesser extent) in Chesterfield. This has reached crisis proportions in places like St. Louis because there’s no such thing as a local TIF project. The domino effect is obvious.

The abuse of TIF policy is out of control in the St. Louis area. And Chesterfield appears poised to make a bad situation worse.