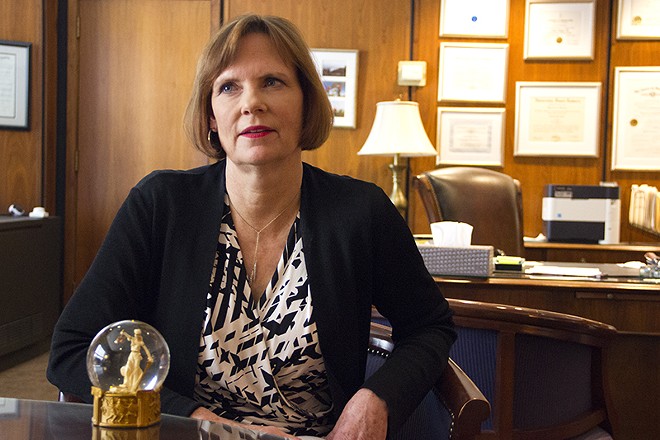 On August 3, 1810, Peter Johnson became the first person to be executed by the state of Missouri. By the time the U.S. Supreme Court found the death penalty unconstitutional in 1972, Missouri had already executed 285 people — most by hanging. Since the court reinstated capital punishment in 1976, Missouri has executed 92 people by lethal injection.

Of these 92 state-sponsored killings, prosecutors in the City of St. Louis and St. Louis County account for a similar number of cases, with 15 executions prosecuted by the city circuit attorney and 18 by the county prosecutor. Throughout the 1980s and '90s, city and county prosecutors showed similar patterns in bringing death-penalty cases. But that changed in 2000.

Since that date, the St. Louis circuit attorney has been responsible for prosecutions that led to the execution of five people, with the most recent in 2011. City prosecutors have not earned a single death-penalty verdict since then — and at this time, no people who sit on death row were prosecuted in the city circuit.

St. Louis County, on the other hand, has been responsible for 10 executions since 2000, with another six people convicted in the county currently on death row. Another man sentenced to death in the county died of natural causes, and seven more saw their death sentences overturned by higher courts.

It's a stark difference — and it stems from each jurisdiction's leadership.

Bob McCulloch was elected St. Louis County prosecuting attorney in 1991 and remained in office through 2018, when he was ousted by Wesley Bell. McCulloch's office earned death-penalty sentences against 25 people, an average of one each year.

In St. Louis city, Jennifer Joyce was elected circuit attorney in 2000 and chose not to seek reelection in 2017. As circuit attorney, Joyce never formally opposed the death penalty — but took a different tack than her counterpart in the county.

Yet she never officially took capital punishment off the table.

"I always avoided saying I would not seek the death penalty because I personally believe that is your job if you're elected to be a prosecutor — to look at all the laws and not say there's one law I'm not going to apply," Joyce says.

In a number of cases, Joyce's office unsuccessfully pursued the death penalty. For example, in 2011, though a St. Louis jury found Frederick A. Barnes guilty of first-degree murder and Joyce asked for the death penalty, the jury deadlocked on sentencing. Judge Thomas J. Frawley then sentenced Barnes to life in prison without the possibility of parole.

Gallup polling has shown support for the death penalty across the U.S. on a steady decline since the 1990s. Joyce recalls visiting the Missouri State Penitentiary in Jefferson City, which opened in 1836 and gained a gas chamber in 1937.

"What I find particularly chilling about the Missouri gas chamber is it has two seats, as if we are in such a hurry to execute people, and we have so many people to execute, that we're taking them two at a time," Joyce says. "I think that kind of zeal, whenever this was constructed, you don't find that in any state anymore."

As public opinion on capital punishment continues to change, the prosecutors the public elects will continue to reevaluate patterns of death-penalty use. Says Joyce, "The reason that prosecutors are elected locally is because the intent is that they mirror the values of the community that they serve."

Even so, many people call for the death penalty in the most extreme cases — and St. Louis Circuit Attorney Kim Gardner, elected when Joyce chose not to run for reelection, seems to reflect some of the complications of Americans' attitudes on the topic.

Like her counterpart in the county, Bell, Gardner was elected as a progressive reformer — but unlike Wesley Bell, she has refused to take death sentences off the table, calling them a "tool in my toolbox." Even while claiming to be personally opposed to the death penalty, she sought to bring in special prosecutors from the Missouri attorney general's office to handle three high-profile death-penalty cases, which would have likely resulted in prosecutors pursuing the ultimate punishment. A judge, however, denied her request.

Gardner's spokeswoman declined to comment beyond what is already in the public record.