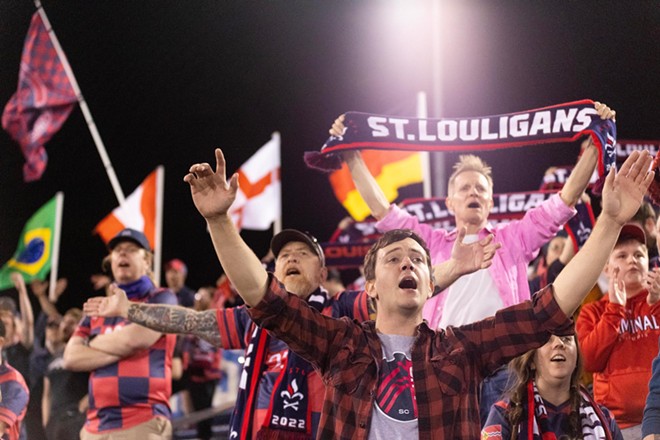 St. Louis CITY SC
Supporters of St. Louis soccer will be filling the 22,500-seat CITYPARK stadium for the first time on Wednesday.

CITYPARK Stadium is designed to be loud. The 22,500-person stadium boasts the closest seats in Major League Soccer, the steepest supporters’ section and a metal overhang that will project the noise.

But the noise has to come from somewhere.

That’s where Fleur de Noise comes in. On Wednesday evening, CITY SC 2 will take on Bayer 04 Leverkusen in the first game at CITYPARK stadium, St. Louis’ new MLS home. Fleur de Noise, the independent fan group and drum corps, will be there, in the Supporter Section, filling the stadium with banging, screaming and chanting.

“We’re gonna show up, we're gonna make noise, you're gonna hear it. You're gonna feel our presence,” says Sam Wise, one of the leaders of Fleur de Noise.

Wise got involved in St. Louis soccer fandom about 10 years ago when he joined the St. Louligans fan club. He had never played drums before. He had never really played music before, outside of trumpet in third grade and the guitar in college “when it was the cool thing.”

But every soccer team needed a rowdy fan section. And every rowdy section needed drums. So Wise signed on as a drummer.

For the last decade, Wise, along with other members, has helped run the drum section of the Louligans while cheering on St. Louis’ various soccer teams, such as St. Louis FC and CITY2. It hasn't been a professional drum line. They had a few “hand-me-down” drums, Wise says, that he kept in his basement. But they were loud and that was all that counted.

In 2019, the MLS announced that St. Louis would get an expansion team, and the stakes for a drum corps changed. Although some Fleur de Noise members are still part of the Louligans, the drum corps rebranded to prepare for the MLS team. Fleur de Noise was born in 2022.

“With St. Louis CITY SC coming up, we had to expand from five guys with a handful of third or fourth hand-me-down drums to something that scales with the team and with the environment,” Wise says. “We knew we had to grow the drum corps. We knew we really had to put some formality behind what we were doing.”

Since starting Fleur de Noise, the drum corps has tripled to 15. But drumming is only one part. There are nearly 35 people in the group, Wise says, with all different kinds of noise-making roles. Drummers, singers, chanters, people leading the chants.

If tonight is your first game or if you’ve been going to games for years, be sure to head to https://t.co/EYUcWZpmdv to see our full chant list or scan the QR code below! pic.twitter.com/GOagKBe0BK

Wise and other fans have helped organize the group over the last few months. Wise painted the drums red and blue in his basement. The fans finalized a list of over 10 City SC-specific chants. They have even turned “Bad Romance” by Lady Gaga into a chant about star goalie, Roman Bürki.

“We are the driving force for the crowd, … and [we] take that energy and project it onto the field for the team,” Wise says. “If the team is struggling, we rally behind them and we try to provide them a boost. If the team is playing really well, they're putting pressure on, we help to give them that extra step of energy.”

Over the weekend, Fleur de Noise held a practice session in the stadium. But the group still doesn’t know what Wednesday evening will look like, having never played in front of such a large supporters' section. The group members have never played in a stadium like this. Well, no one has ever played in this stadium. It’s the first game after all, and who knows what chants will stick and how the drums will sound.

“This is our dry run as much as it's the dry run for the club,” Wise says.

Caleb Leon
Members of the newly founded Fleur de Noise buddled up for a practice session in CITYPARK stadium this past weekend.

But Wise says he’s not nervous. He spoke to RFT as he drove to the stadium at 11 a.m., eight hours before the game began. He took a half-day from his job in IT, but even at work, he found himself watching live streams showing the new CITY SC kits. He says that he just feels “pure, raw, unfiltered excitement.”

“We’ve been looking forward to this,” Wise says, “since the day the club was announced.”