Get ready to skank it up with one of Philly's finest 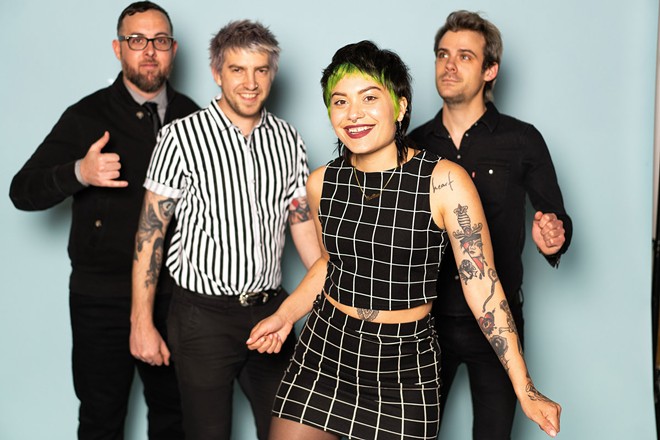 VIA ARTIST BANDCAMP
Catbite will perform in St. Louis on Wednesday.

On Wednesday, November 16, Off Broadway will host Philadelphia ska-punk quartet Catbite, along with St. Louis bands the Centaurettes and Fight Back Mountain. Catbite was last in St. Louis in June, when the band opened for prolific pop-punk artist Jeff Rosenstock at Blueberry Hill. The band has been consistently touring since April 2022, spending much of the year supporting Streetlight Manifesto and Anti-Flag on their respective national and international tours. Catbite’s upcoming St. Louis show is the third of four headlining events the band will be playing before rejoining Streetlight Manifesto for the remainder of the latter band’s fall 2022 tour.

Catbite is currently signed to Bad Time Records, a label specializing in independent ska and ska-punk artists. Bad Time is owned and operated by Mike Sosinski, the guitarist and lead singer for the band Kill Lincoln.

“I started Bad Time Records in 2018 after being frustrated by the lack of support the current generation of ska-punk bands received from general music communities,” Sosinski writes on Bad Time’s website. “Everyone seemed to think it was a bad time for the genre. … Like many before me, I knew the only way forward was to do it myself.”
Tim Hildebrand, guitarist and backing vocalist for Catbite, has a close relationship with Sosinki, both being veterans of the east coast ska-punk scene (Kill Lincoln is based in Washington, DC).

“Once we started Catbite, he reached out immediately,” Hildebrand tells RFT. “He really liked what we were doing and offered to put our music out. It’s been great watching us and the label grow side by side.”

Catbite is currently touring in support of its 2021 album Nice One, which was released through Bad Time. The band’s members cite artists such as the Specials, the Selecter and Elvis Costello among their primary influences. Although not explicitly political in its songwriting, Catbite tries to strike a balance between “danceable, upbeat music” and socially relevant lyrics.

“Our lyrics focus a lot on mental illness and its acceptance in society,” Hildebrand says. “Pretty much all of our songs, lyrically, are stemming from times in our lives where we’re not exactly doing okay. … Normalizing talking about mental health is extremely important to us.”

Lead Catbite songwriter Brittany Luna, who identifies as queer and Hispanic, “uses her lyrics to express a lot of pain and struggle with growing up as queer person of color,” Hildebrand adds.

Some of St. Louis’ more notable lovers of ska are eagerly awaiting Catbite’s stop in town, including Chelsea Bluebeat, DJ for the KDHX show Ska’s the Limit.

“I haven't had the pleasure of seeing Catbite yet, but as a live music fan and lover of ska music, I'm looking forward to their show next Wednesday,” Bluebeat tells the RFT. “They're one of the most active bands helping keep ska alive in 2022, and I've heard they put on a tremendous show.”

“The midwest shows we’ve played have always been so much fun, with lots of energy from the crowd and super sweet people,” says Luna, lead vocalist for Catbite. “That really gives us a boost of energy while we’re playing. It seems like people are genuinely happy and not afraid to be seen having a good time at a show!”

St. Louis indie rock duo the Centaurettes is one of two local bands opening for Catbite, along with politically charged hardcore punk group Fight Back Mountain. Formed in 2018, the Centaurettes’ lineup consists of guitarist Derek Hibbard and bassist Bionca “Bia” Maldonado, who both share vocal duties. The group was recently forced to downsize to a two-piece act while their drummer is recovering from a knee injury, with live performances currently consisting of Hibbard and Maldonado playing live guitar while backed up by pre-programmed drum and synthesizer tracks.

“We were one week away from going on our first tour and our drummer tore their ACL,” says Maldonado. “We ended up just getting a bunch of the master tracks from the producers we worked with [and working these into the live performances].”

“We added all kinds of synths and electronic shit — the drum kit is real studio drums mixed with electronic drums, so it all sounds way more electrified,” adds Hibbard.

Both Hibbard and Maldonado feel like the change has been a positive one, allowing them to create a more “orchestral” sound in their music and a unique live experience.

“It’s punk with soul, with jazz, with blues, with hip-hop. We like to call it ‘pastel punk,’” says Maldonado, who is also a classically trained cellist.

The band recently returned from its first headlining tour throughout the midwest, playing cities like Kansas City, Minneapolis, Milwaukee and Memphis.

“A lot of our roots are DIY; we started by playing in basements and people’s garages,” explains Maldonado, who is excited for the group’s increasing exposure, driven in part by a set at the 2022 SXSW festival. More recently the group played at Off Broadway in August, opening for Los Angeles garage rock band Starcrawler. Despite these recent successes, the duo is committed to playing an active role in the St. Louis DIY punk scene. They are known for hosting shows with other local artists in the basement of their Hazelwood home (a venue that they dubbed “Wolfpussy”).

Hibbard and Maldonado are both excited to be opening for Catbite, a band they greatly respect.

“They’ve worked extremely hard and done so many amazing things,” says Maldonado. “They’ve done so many benefit shows and charity shows, they’ve traveled on their own dime and really, truly grinded for the following that they have. …They’re finally being recognized for hard work and talent, and just being good-ass people.”

The members of Catbite, meanwhile, are equally excited for their St. Louis stop. When asked what his sales pitch for the show would be, Hildebrand had this to say: “Do you like music? Do you like high energy on stage and in the crowd? Soulful singing? Kickass vocal harmonies? Ska! No Horns! Guitar and keyboard solos that will make you go ‘whoa’! That’s a Catbite show!”