We spoke with Brad Demunbrun, a founding member of the soccer fan club since 2010

VIA ST. LOULIGANS
The St. Louligans have been supporting St. Louis for over a decade. Now they finally have an MLS soccer team.

When CITYPARK hosted its first game November 16, the stadium was rocking. A lot of that noise came from members of the St. Louligans, one of the largest soccer fan clubs in the city. It's been around since 2010, supporting the various soccer teams throughout the area, including AC St. Louis, St. Louis FC and now, St. Louis CITY SC. RFT spoke with Brad Demunbrun, 52, a founding member of the St. Louligans, who described his unofficial title as "the vice president of silly hats."

How did the St. Louligans get started? 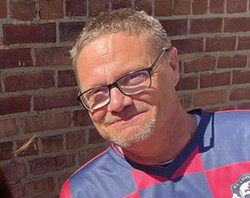 Courtesy of Brad Demunbrun
Brad Demunbrun has been with the St. Louiligans since its inception in 2010.
In 2009, [St. Louis attorney] Jeff Cooper was trying to get an MLS team in St. Louis. He started AC St. Louis, and they played in the NASL. So that was a pro soccer team that lasted a year here. That first year of AC St. Louis, a bunch of us got together, we're having fun [and we] decided to band into a group and make it a thing. Then when the team folded we just kept showing up and going to amateur games or indoor games, whatever there was, just to kind of keep a presence in and support soccer in St. Louis.

Does it feel different with an MLS team coming to town?

Yeah, it feels different. There are more rules. There are more things we can't do. But there are also more opportunities with more people to do bigger things. But as far as the family atmosphere and the tailgates, and having fun, I think it's gonna be the same. It's just gonna be bigger. St. Louis Soccer Fans Bring the Hype to MLS Stadium Debut: Despite the cold, $458 million CITYPARK stadium was packed with fans — and they were loud

On the St. Louligans website, I saw a picture of a guy with a chicken-head hat. That's you, right?

That's me [chuckles]. I don't wear that anymore.

It started as a joke. The very first AC St. Louis game that we went to in 2010, I had a minivan full of stuff — all my friends were piled in it. And my son had this chicken hat in there. One of my friends said, "You should wear this." I said, "I don't care. I'll wear it." So I wore it. Then more people started to recognize me as the guy in the chicken hat. It just became a thing, like, "Oh, we'll be in the parking lot before the game with the chicken-head guy." Or, "I'll be standing in the stands. Look for the guy in the chicken hat. I'll be near him." So it just became a little rallying point. But you know, [at] 100-degree games that became old real quick.

I was going to ask you why you stopped.

I break it out for special occasions.

Do you have any superstitions?

I personally don't have anything too crazy, but a lot of fans do. ... I like to get there early, set up the tailgate, get everything ready to go. Then we've got 15, 20 minutes before it technically starts. There's a group of us that have been around for 12 years. We like to sit down and have one beer amongst ourselves, say, "This is going to be a good one," and see what happens.

Why are the St. Louligans important in St. Louis?

When everything's going great, the team's winning and it's sold out, there's not a problem. But if a team starts to lose and attendance dips, it's that supporters' section that keeps it going. Because win or lose, we'll be standing for 90 minutes singing, making noise and trying to get the rest of the crowd into it. Sometimes if the game's bad, we can get people more excited. We're going to be there, every day, no matter what, rain or shine. 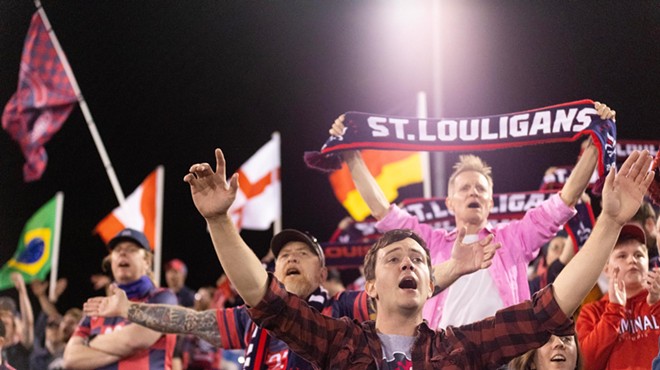