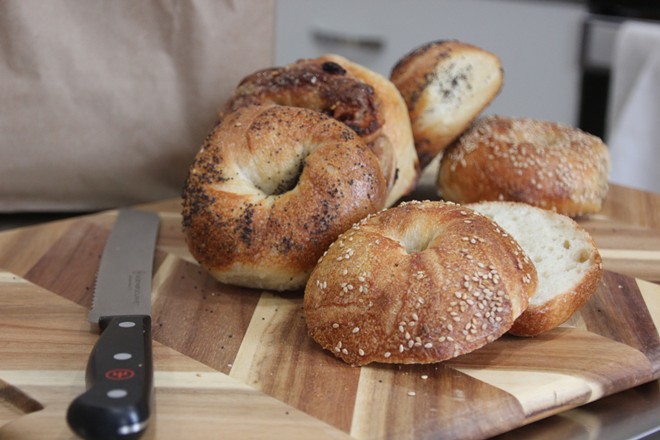 Jessica Rogen
The bagels are chewy and tender.

St. Louis has been starved for good bagels.

That was immediately apparent upon pulling up to the soft opening of Bagel Union (8705 Big Bend Boulevard, Webster Groves), the new effort from Ted Wilson and Sean Netzer, owners of the beloved Union Loafers Cafe and Bread Bakery. Arriving just 15 minutes after the soft opening's start time of 8 a.m., I found the line to get into the small corner shop stretched down the block and around the corner.

“Do I want a bagel this much?” I wondered aloud, and my husband didn’t answer, a sure sign that the answer should be apparent. Nevertheless, I jumped out of the car and ran to the back of the line while he parked.

My fellow St. Louisans and I queued in the cold damp under a gray sky, and at 8:20 a.m., a woman at the front of the line told me she’d been there since 7:40. I grimaced and walked back to our place in the back. So, maybe 30 minutes I thought, foolishly. 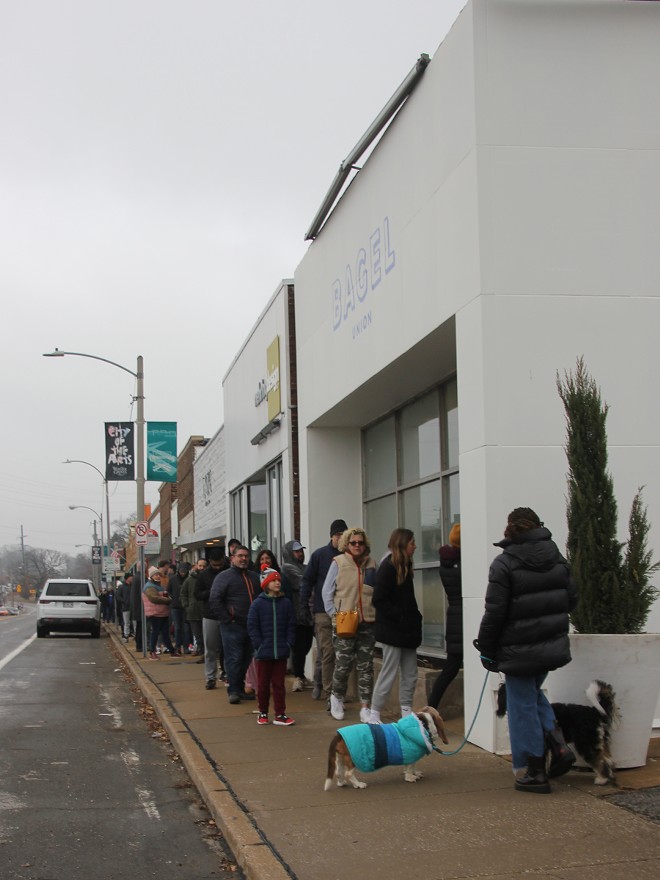 I’ve always thought that people who enjoyed queuing were insane. But after being in line for 90 minutes in 30-something degree weather, I get it. Almost immediately we made friends with the woman behind us in line, amiably chatting about Schitt’s Creek and the possible ghosts in her new home. Then we chatted with the man in front of us, who had lived in Indianapolis and asked about my Indy marathon beanie. After half an hour, we realized that the guy who kept running into the street to snap phone photos was Pulitzer Prize-winning Post-Dispatch photographer Robert Cohen and said hello.

A person in an inflatable dinosaur costume walked by. We stared enviously at customers walking by with stuffed paper bags.

So the 90-plus minutes it took to get our bagels flew by, helped by both a good Samaritan who stopped by and reassured us that supply was good, as well as yeasty, appealing wafts of air emanating from the front door as customers departed.

Stepping inside the small shop was relief to our cold digits, as was the serve-yourself coffee. The decor inside is modern and simple. At the front of the space is a bakery case filled with the goods, two registers and a paper-ticket system. The space for customers is L-shaped and will one day hold a small amount of stools for an eat-in option though the setup is clearly mostly for takeout. 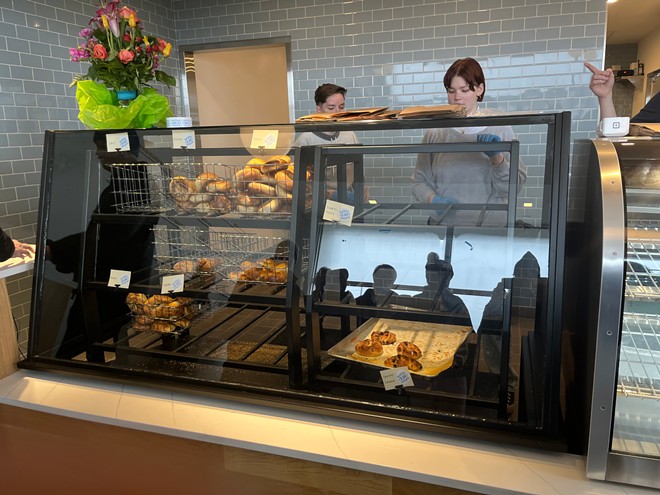 For the soft opening, Bagel Union was only offering bagels and schmear (though they were out of the latter by the time we made it in). When the shop is fully up and running, it will also offer bagel sandwiches. We left with a paper bag filled with a bakers’ dozen assortment of plain, sesame, poppy, everything, salt and cherry crunch and the phone number of one new pal. The bakers' dozen cost $27, and bagels are $2.50 to $3 each.

Too impatient to wait the 15 minute-drive home, we dug into the cherry in the car. Here the bagel dough was twisted and filled with a plethora of juicy red fruit and lightly glazed, reminiscent of babka. It was super tender, and still warm, it crossed the line into pastry, despite the dough's leanness. And it bore no resemblance to a sad, conventional fruit bagel.

At home we sliced the others up. Though the crust is firm and chewy it was also thin, a kind of delicious middle step between an East Coast-style bagel and an upscale roll. The inside was meltingly tender with a light and airy crumb that soaked up butter well.

We each had at least two and plan to go back when it officially opens sometime next week. I'm especially interested in a bagel sandwich.

All in all — it was worth the wait in line.