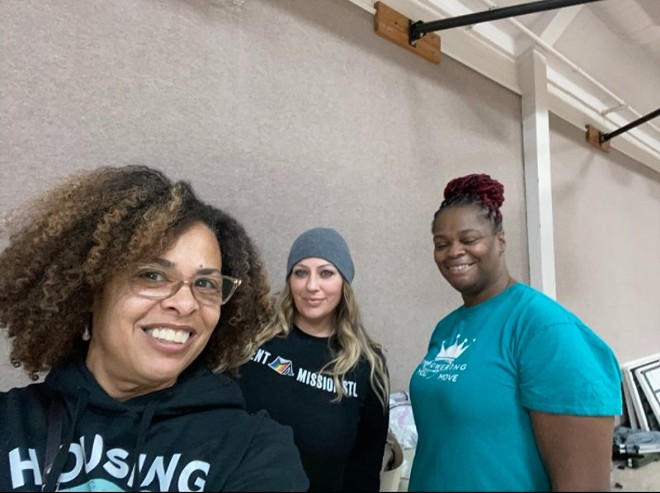 Unhoused STL organized volunteers at shelters and distributed food and hygiene items to unhoused people in St. Louis. Curtis says targeting against her organization began late last year after she refused to allow volunteers to work at a shelter she deemed dangerous. That’s when she claims leaders of Lifeline Aid Group, a new nonprofit also offering services for the unhoused, began tarnishing her name by stating on social media that Curtis “doesn’t support shelters.”

Curtis says she saw the “harassment” as lethal for her organization — capable of destroying her ability to fundraise.

“I didn’t really have the time, capacity, or maybe even the skill set, to build [Unhoused STL] as an organization to where it could sustain this attack,” Curtis says.

Unhoused STL’s social media pages were deleted last week. Curtis posted a detailed account of the organization’s downfall on her personal website last weekend. In addition to the harassment, she says, Lifeline Aid Group falsely accused her of committing fraud.

But Syd Hajicek, treasurer of Lifeline Aid Group, tells the RFT that Curtis’s “strange” claims came out of the blue. He says his organization started talking about Curtis and Unhoused STL online only after Curtis started criticizing him and his organization in posts of her own.

Hajicek says the vitriol began after Lifeline announced on social media it would no longer work with certain unnamed organizations that did not support a shelter off Kennerly Avenue last winter.

State Representative Kimberly-Ann Collins (D-St. Louis) opened the Kennerly Shelter on November 28. It closed a month later to transition to a new permanent location, according to a statement from Collins at the time.

Curtis says Hajicek “targeted” her when she refused to work at the shelter for free; she’s freely lent her services in the past and “people kept using” her.

“I was living off of credit cards for a minute trying to support this organization,” Curtis adds. “I’m not doing that again to support [Collins’] shelter.”

Even so, Curtis says she ultimately lent some support to the shelter. Unhoused STL volunteers worked there until they told Curtis they felt unsafe at the shelter. So Curtis pulled them out.

“Unhoused STL volunteers are college students and West County soccer moms,” Curtis says. “I’m not sending them to that environment.”

In a phone call with the RFT on Thursday, Collins denied that her shelter was anything but well run. Multiple people who volunteered at the shelter, including Hajicek, say Curtis’s description of the shelter did not match what they saw.

“[Curtis] came down to the shelter saying she was gonna try to shut it down,” Hajicek says. “She told everyone there were drugs and needles there and all kinds of insane things that weren’t happening. I was very confused by that.”

Curtis at one point removed a spreadsheet with volunteer information from public view. She and Unhoused STL volunteer Avital Reznikov say they called inexperienced volunteers and told them not to go to Kennerly Shelter.

Reznikov says this type of conflict between unhoused advocates is common. Stress often boils over when resources for the unhoused, such as money, volunteers and shelter space, are low while need remains high.

“Everyone does what they can when they can,” Reznikov says. “If the city provided adequate shelter for the most vulnerable citizens, outreachers wouldn’t be so stressed. Lack of city-funded shelter beds is the real issue here.”

St. Louis has relied on a patchwork of providers to provide emergency shelter in winter months after the city forced Larry Rice’s New Life Evangelistic Center to close in 2017. Advocates have pushed for a 24/7 shelter with low or no barriers to entry, but in its absence, numerous organizations and ad hoc coalitions have attempted to meet the region’s needs.

“There are a lot of different formal organizations and loose coalitions that try to find services because the city is failing dismally at providing any kind of services for the unhoused,” Cate Redfern, Unhoused STL board president, says. “There is a huge mental toll for every person working in this community, and it’s part of why we’re closing Unhoused STL.”

While the dispute over the Kennerly Shelter erupted into public view, the hard feelings between Lifeline and Unhoused STL apparently began months earlier, with a disagreement over money for a temporary shelter at Bethel Church last February.

The shelter at Bethel ran for eight days during a cold snap last year and cost about $2,000 to run, with costs including food and utilities. According to Hajicek, Curtis had received at least $7,500 in donations for the shelter. Curtis would not confirm the amount to the RFT but insists she was a “good steward of public money.”

The donations went to Curtis’s personal bank account. Unhoused STL was not an official nonprofit yet, and Curtis says that left her unable to set up a business account for it.

Curtis and Bethel Church had agreed that Unhoused STL would run the shelter so long as the organization reimbursed the church for utilities, according to Bethel Church member Amanda Reynolds. But despite receiving enough donations to cover the $700 cost of utilities, Unhoused STL did not pay them, Reynolds says.

Curtis had also refused to leave the shelter when temperatures warmed, Reynolds says, and “rushed at” Reynolds.

“Because of that incident, I would not open my doors to a shelter again at that church until we were better staffed to where we wouldn’t have to put up with that,” Reynolds says.

Curtis did send the church an online payment of $300 to cover trash pickup and supplies, according to her post on her website. Curtis says she also spent over $2,000 on boots and winter gear to give to those who stayed at the shelter.

“Ramona probably spent more of her own money coming from her personal account then she took in,” Redfern says.

Hajicek says Curtis eventually gave Lifeline $440 for the shelter in addition to the $300 she gave directly to the church.

The money issue at Bethel didn’t come up again until Curtis called Hajicek a “colonizer” on social media.

“His whiteness made him feel so entitled to this Black woman’s labor, that the very first time she ever said no, he lost his shit,” Curtis tells the RFT.

Curtis now says she will continue working for the unhoused, but not under Unhoused STL. Unhoused STL’s board has started to disband the organization as a legal entity, according to Redfern.

“There is a very significant emotional investment and a huge mental toll for every single person that is working in this community, and it’s part of why we’re closing Unhoused STL,” Redfern says. “The mental health of Ramona is far more important to me.”

Lifeline began because Falvey wanted to do some good and help the unhoused.

"Our Black and Queer-led nonprofit's focus is helping people in need,” Falvey wrote in an emailed statement to the RFT. “We're excited for this new year and proud of what we have accomplished thus far."