Tyler Gebhard was killed by a St. Louis County cop he knew, in a home where he was once welcome

COURTESY OF THE GEBHARD FAMILY
Tyler Gebhard played varsity football at Affton High and then walked on at Southeast Missouri State.

On July 7, 2016, two days before his death, Tyler Gebhard opened up his Facebook account and typed a message to Julie Boyd.

"Thanks Tyler. Come see us!" she replied six minutes later.

The Boyd family had not seen much of Tyler since he went away to college. Co-founders of a small nondenominational Christian church, the Boyds had run into Tyler about a month before at a mall food court and had shared a pleasant meal with him, by their account. They had known him for four or five years. He played varsity football at Affton High School with Julie's youngest son, Jonah; her older son, Josh, was an assistant coach. Tyler had often joined other athletes and classmates on Wednesday nights for a church youth group led by Julie's husband, Rich, at the family's house in the tiny south St. Louis County suburb of Lakeshire.

The homey setting and multiple ties through sports, school and church made for a close-knit bunch. Tyler had joined them for church services some weekends and had even once played Joseph in a Christmas pageant.

On Facebook, Tyler promised Julie Boyd he would see them on July 9 for church. 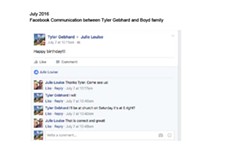 "That is correct and great!" she replied.

One day later, on July 8, he showed up at their door. It did not go well.

Rich Boyd was out of town for work, but Julie Boyd was home with her married daughter, Jordan Lasley, and young grandchildren. They later told police that Tyler was polite, taking off his shoes as he entered, but he seemed different than he had the month before at the food court.

"It's getting real bad," he reportedly told them as he sat on the couch.

They thought at first he was talking about the weather, but his mind was on a string of recent police shootings. The Boyds are white. Tyler is biracial — his father was black and his mother white — and the past three days had been filled with explosive news stories about law enforcement officers killing and being killed, with race the underlying context in much of the coverage.

A black man named Alton Sterling had been shot dead on July 5 while he was pinned to the ground by police in Louisiana. A black man named Philando Castile had been shot dead on July 6 by police during a traffic stop in Minnesota. Videos from the shootings spread quickly on social media, sparking protests across the country. A black military veteran named Micah Johnson gunned down five police officers on July 7 during a march in Dallas, reportedly retaliating for the deaths of black men killed by cops.

Tyler had begun to worry. "Things are about to get bad," he had told his stepfather early on the morning of July 8.

That afternoon in Lakeshire, he told Julie Boyd and Jordan Lasley that it was getting dangerous with cops killing people. He was afraid for his safety.

Jordan Lasley was worried about the shootings, too, but for different reasons. She later told detectives that she reminded Tyler that her husband, Josh Lasley, was a police officer and told him she did not want to talk about the recent news. She claimed she tried to steer the conversation in another direction, but it was no use.

"He kept coming back to the police," she said.

It was unsettling — so much so that Julie Boyd surreptitiously asked her oldest son, also named Josh, to drop by the house, they said. Tyler was still talking about the police when Josh Boyd and his wife arrived. They said they also tried and failed to change the subject. Jordan Lasley was becoming more and more upset.

"Why are you here?" she asked. "Why did you come to visit? Why are you bringing this up?"

He just came by to say hello, he told them. Apparently realizing he had upset everyone, he said he would leave. It was an awkward exit, so Josh Boyd followed up with him later on Facebook.

"Tyler, I that think both sides need to be able to have discussions with each other about getting upset," he wrote. "I hope you realize I wasn't trying to be mean but my sister is extremely upset and worried with all the police that have been killed in the last two days. Obviously, there are some bad cops, but I think the majority of cops are good guys."

"You're right but I don't feel bad for Josh [Lasley] he knew what he was getting into when he took his oath," he wrote. "He's supposed to be out there making a difference. But he needs to be careful."

Josh Boyd replied that he thought everyone needed to be careful. His brother-in-law would be careful, because he's a smart guy, he added.

"I know he is," Tyler replied. "He just needs to keep his head down."