PHOTO BY SARAH FENSKE
The "Air Mail," a classic '40s cocktail on the Chase Club's menu.
If you haven't been to the Chase Park Plaza (212 N. Kingshighway, 314-633-3000) in awhile, it's highly possible that your last memory of the venerable hotel involves dancing the night away at Cafe Eau — the casual bar and grill that frequently hosted live music for dancing and connected to the outside patio.

But last June, Cafe Eau changed its name to the Chase Club — and in the nine months that followed, a whole new bar has been gestating, right there in plain sight. Now ready for its official unveiling is a new menu, a smart list of top-notch cocktails, and a much sleeker, sharper appearance, courtesy of Atlanta-based TUL Designs. There's even a pair of new 75-inch flatscreens and pair of pool tables.

Joshua Johnson, the Chase Park Plaza's beverage manager, says the new look and new offerings are about staying up to date — even as the bar's Art Deco touches and some cocktail offerings harken back to the hotel's glorious past. 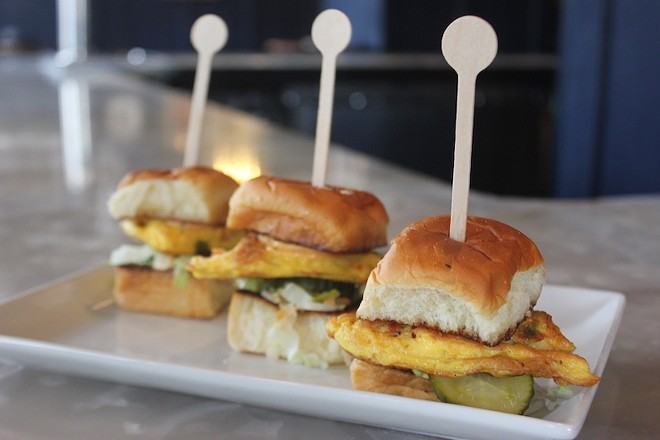 PHOTO BY SARAH FENSKE
"St. Paul Sliders" include a shrimp-studded egg patty on a soft bun.
Just across the hall, the Preston, the small plates restaurant that the hotel debuted in early 2016, is wine-centric and meal-centric. The Chase Club is more casual, and is justifiably proud of its beer program — there are 18 taps, plus 27 bottles and cans. You can grab a bite there or keep drinking, and dancing, long after dinner is done. The food menu is by no means small — but the focus is on simple, tasty treats rather than elaborate presentations.

To that end, the kitchen offers a trio of "St. Paul Sliders," an addictive variation on the St. Louis classic, served on soft buns, studded with shrimp and topped with spicy mayo. There's also a burger, topped with boursin and bacon onion jam, and a "Short Rib Mac," a hearty riff on mac and cheese whose sauce is infused with braised short ribs.

Oh, and if you really want to get goofy, you'd be a fool not to order the PB, J & B, courtesy of the hotel's new executive pastry chef, Eric Phillips. Think of it as a peanut butter and jelly candy bar, with a scoop of house-made banana gelato on the side. (Of the banana, says Phillips, "We wanted to add that 'other' component," kicking things up a notch.) It's incredibly decadent, and also quite good.

PHOTO BY SARAH FENSKE
The PB, J & B: a peanut butter and jelly bar topped with peanut brittle and accompanied by banana gelato.
The new concept has its grand opening this weekend, beginning Friday, a date designed to coincide with the Cardinals' home opener. The VIP grand opening is from 5 to 7 p.m. on Friday, March 31, followed by all-day happy hour on both Saturday, April 1 and Sunday, April 2. Well drinks at just $5 will accompany beer specials all day; the patio bar will be open.

On both Friday and Saturday, live music will ring out from 9 p.m. to close. Might be a perfect time to see how much has changed since you last drank the night away at the Chase. 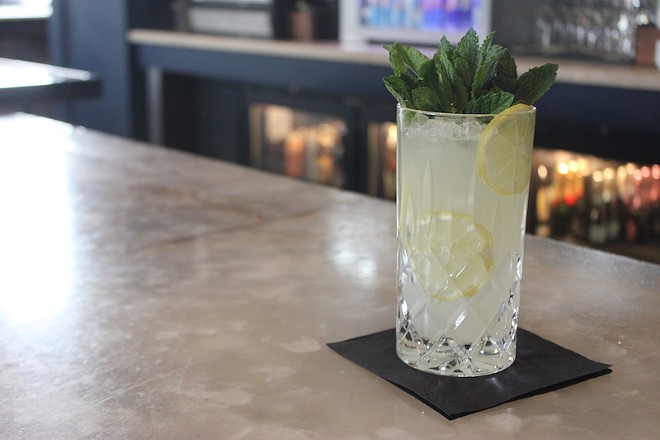 Turn the page for more photos of the Chase Club.