PHOTO BY JOHN LAMB
London ... it'll drive you to Bedlam.

If you prefer your musicals to be grisly, grimy and nihilistic, Stray Dog Theatre can help you out. The company's current production of the Stephen Sondheim and Hugh Wheeler classic Sweeney Todd is a dark and blood-soaked monstrosity. That's not a criticism; it's a plaudit.

Despite the grand guignol subject material, Sweeney Todd is exceptionally popular with modern audiences. (Stray Dog's artistic director, Gary F. Bell, announced from the stage that the first two weekends sold out before the show even opened.) Many of the songs have a bouncy, English music hall quality that belies their ugly subtext of revenge, murder, cannibalism and good ol' manipulation of one's fellow humans.

To his credit, director Justin Been leans heavily on the show's origin as a penny dreadful — a depraved short story sold for one cent to England's thrill-seeking populace in the nineteenth century — wringing out every last damned drop of blood. This is a Sweeney Todd that rolls around in the depravity of mankind's worst excesses, a tale of madness and murder that no one escapes. While not the jolliest of shows, it makes for a satisfying and effective production that overwhelms with beauty and horror in equal measure.

Jonathan Hey is Sweeney Todd, the nom de guerre of Benjamin Barker, a barber who had his wife stolen and raped by a lustful judge. As a criminal, Barker was transported for life to Australia, but he's fought his way back to England to have his revenge. With him is Anthony Hope (Cole Gutmann), the young sailor who saved him from drowning. 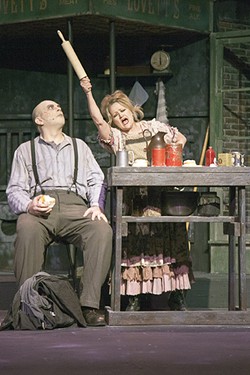 PHOTO BY JOHN LAMB
Lavonne Byers makes the worst pies in London, but Jonathan Hey only thinks of revenge.

Hey is hulk of a man, and his shaven head and deep-set eyes give him a menacing air. Speaking in a deep monotone, his Sweeney Todd is more dead than alive. He's well-suited to London, which is teeming with hungry people willing to do anything to get ahead in life.

Anthony is far more lively, looking for — and finding — love quite quickly in the form of Johanna (Eileen Engel), a beautiful young woman kept pent up at home by her guardian, Judge Turpin (Gerry Love). The Judge is the man who Sweeney hunts, and Johanna is Sweeney's long-lost daughter, something Sweeney soon discovers, thanks to his old acquaintance Mrs. Lovett (Lavonne Byers).

Byers received a round of spontaneous applause when she took the stage on the night I saw the show, as if the audience already knew how good she was going to be in the role. More of us should have clapped, because Byers exceeded even the highest expectations. Her Mrs. Lovett is a bright and buoyant gossip, ready to share a joke or a secret as needed and able to supply comfort as easily as she serves up people to other people in her pie shop. Cunning and convivial, she worms her way into Sweeney's good graces and then sets herself up as his partner and lover.

Scenic designer Rob Lippert has built a gray and creaky split-level London for these characters to inhabit. Most murders are performed in Sweeney's second-floor apartment, which rotates to reveal the interior. When Mrs. Lovett reunites Sweeney with his old barbering tools, Hey enters a murderously still trance, straight razor grasped in his red, raw hand. "Now my arm is complete," he intones as a warning and declaration of intent. It is a beautifully staged nightmare, one of many Been has plotted.

London is the final character in the play, and the most dominant. Sweeney believes it is London that is to blame for his woes, decrying it as a corrupter of all in the song "No Place Like London." Been embellishes on this idea throughout the play, as Todd mechanically slays a parade of innocent bystanders and Mrs. Lovett feeds them to hungry customers, who can't get enough of her home cooking. Judge Turpin goes mad from lust for his ward Johanna, and Anthony is driven to break the law to snatch her from her lawful guardian. Even Mrs. Lovett's innocent serving boy Tobias (Connor Johnson) is ruined by the city, going mad from the horrors he's endured under her care. When Anthony and Johanna make their eventual escape, there is the sense that it's only temporary; London has claimed them, and it will have its way. Johanna has killed a man during their escape, and no good will come of that. London will be waiting for them, just like it waited for Sweeney Todd to return.