The St. Louis Swap Meet Is Going on Hiatus Until 2018 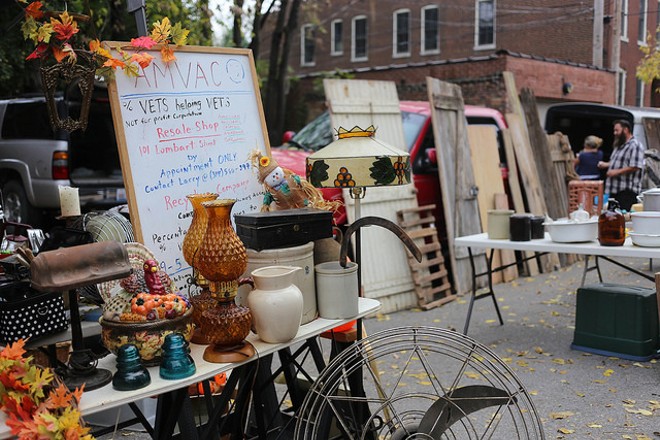 The good news, however, is that it is not gone for good. The flea market, which began along Cherokee Street's Antique Row in 2015 and added dates along the riverfront last summer, announced Monday on Facebook and Twitter that it intends to reopen in 2018.

The location and timing are "still a mystery," the organization announced, promising to notify patrons once it is decided.


The reason for the hiatus? The swap meet's founder, Martin Casas, was the field director for Mayor Lyda Krewson's campaign. Upon taking office, Krewson appointed him as a special assistant to the mayor. Casas says he decided to put the swap meet on hold as he gets used to his new job.

"I'm trying to get a better handle on what my schedule is like, and I just didn't feel like I had enough time or energy to commit fully to make the swap meet everything it should be this year," Casas says. "So I'm going to focus on my day job right now and figure out a plan for 2018, with the full intention of bringing it back in 2018."

The St. Louis Swap Meet met with opposition in the past from Antique Row shop owners, who were concerned about competition to their businesses and actively fought his permit at City Hall. However, Casas says nothing like that prompted his decision to postpone the swap meet this year.

"That all worked out," Casas says of the past conflict.

He adds, "I knew that we had to prove ourselves, that we could be good partners and could be good neighbors, and by the end of the season we were. Everybody was looking forward to the swap meet, some of the biggest sales days for a lot of stores. So we left on a very good note with all of our customers and all of our neighbors."

Casas says he has big plans for the swap meet. He wants to better connect with the startup community so small businesses, food entrepreneurs and other services can use the swap meet as a place to test their products and advertise. In order to do that, he says the swap meet needs a better understanding of what its footprint looks like — so he also wants to find a permanent location, complete with indoor and outdoor areas so the swap meet can be open every weekend all year. Space for seating, live music and an area for kids to play are also goals.

Beyond those additions, Casas is looking at a not-for-profit format. St. Louis Swap Meet spent what it made in the past years, he says; a better funding plan, investors and better marketing could take things to the next level.

In the meantime, Casas apologizes for not being more forthcoming with information about the swap meet's future as he's juggled his various commitments.

"I wanted to make sure people knew sooner rather than later what our intention with the Swap Meet was," he says. "It was my favorite thing to do; I've loved doing it every weekend. I cannot wait to get back out there and do it again."