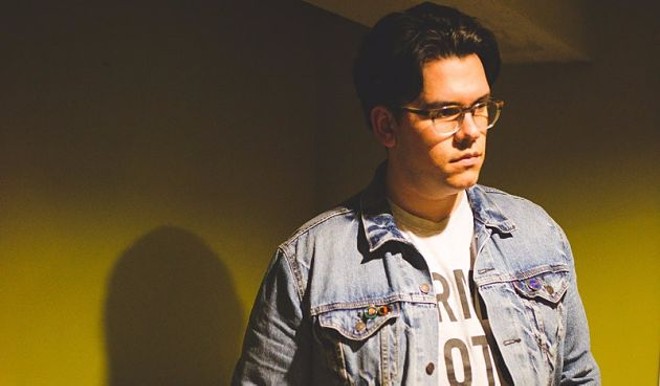 When Zach Sullentrup and his bandmates formed Tidal Volume, the members were students at DeSmet Jesuit high school, and the songs didn't exactly hide that fact. That's not a knock — there's an art to capturing and corralling hormones, teen angst and one's burgeoning identity in a three-minute pop song, and the band's emo-inflected tunes combined the raw edge of youth and an education in power-pop dynamics.

At this point in Sullentrup's life, both high school and college are firmly in the rear-view. While Tidal Volume still performs and records, Sullentrup, the band's singer, guitarist and songwriter, is about to release his first solo record, Debt Sounds. It's a full band production — some of his Tidal Volume bandmates back him here — but he used his time away from home while enrolled at Mizzou to stretch his songwriting chops.

"We still do that band at full force but in college we were split between St. Louis and Columbia," says Sullentrup of Tidal Volume. "During the semester I had all the time and freedom to write songs. For our last album I had fifteen or sixteen songs that fit that band, but I had a bunch of solo stuff I released on Bandcamp to test the waters."

After that initial demo-dump, Sullentrup used the end of his college career as a natural time to take stock. "There was this batch of songs from my college era that fit into a nice narrative," he continues. But, he says, they weren't exactly a good fit for his pop-rock quartet. They were too personal, too varied and too loose to fit into the frame that Tidal Volume had created. "I'm a big fan of pop and rock music, and Tidal Volume is a project that reflects that. But I also like quieter stuff and also more raucous sounds — Debt Sounds reflects that broader palette of sounds." 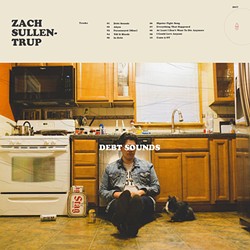 For the late-May release of Debt Sounds — yes, it's a nod to Pet Sounds, down to the cover's use of the iconic Cooper Black font — Sullentrup plans to launch the album with his newly christened record label, Flaming Garbage Records.

"I love the idea of community building within music," says Sullentrup of his foray as label-boss. "I think it's really hard to make music in isolation. We've always struggled with that — there weren't a lot of bands in St. Louis that sounded like Tidal Volume." Sullentrup views the label as an "overarching signifier" for all of his projects, as well a potential home for friends' releases. But given the state of physical media in the music industry (CDs are seen as almost entirely obsolete; vinyl is hip but costly), Flaming Garbage plans on bypassing traditional modes of distribution. So instead of shiny silver discs, Sullentrup plans on getting creative with distribution — befitting a young man who left school with a focus in marketing and who currently works at an advertising agency.

"The main idea is, we don't want to do CD or vinyl or cassettes at all — we want to do forward-thinking digital releases," he says. "The release for Debt Sounds will be a coffee mug with a tea bag in it, and the tea bag will have a download card on it."

The ten-track album still leans on the nervy, kinetic outlines of Weezer and Jimmy Eat World songs — lead single "Parannoyed (Mine)" rides on a chunky melodic bass riff and embraces the point of view of a needy, frustrated would-be boyfriend. Later, the cringingly titled "Hipster Fight Song" takes aim at indie-rock scene jockeying: "It doesn't matter if the titles are clever / Cuz none of your songs are gonna last forever," Sullentrup sings. He smartly points the finger back at himself and his stifled creative process, and his own desire to play in the buzz-band sweepstakes.

Sullentrup's songs hit a more compelling note when he is less arch and more emotionally bare. Closing track "Game 5 OT" juxtaposes the heartbreak of playoff hockey (something St. Louis Blues fans don't need a reminder of) with romantic uncertainty and soul-baring. His guitar's twangy figure paints an appropriately spare picture before the band comes in with a twin-guitar crunch and plaintive piano underpinning.

"I always loved the idea of writing very broadly — people can relate to love or pain in a broad sense. Everyone has broken up with someone at some point," he says.

For Sullentrup, those formative years as college ends and adulthood beckons provided the necessary grist for these songs. And if he suffered for his art — and more than a few songs here roil with emotional turmoil — Sullentrup was ready to contend with the fallout.

"I think I didn't shy away from how dark it needed to go for me," he says. "In a lot of ways writing these songs was a healing exercise for me. My college years were very explorative and very distinct years of my life where I learned about the world I exist in and where I fit in."