What will happen to St. Louis' Little Bosnia when it's not so Bosnian? 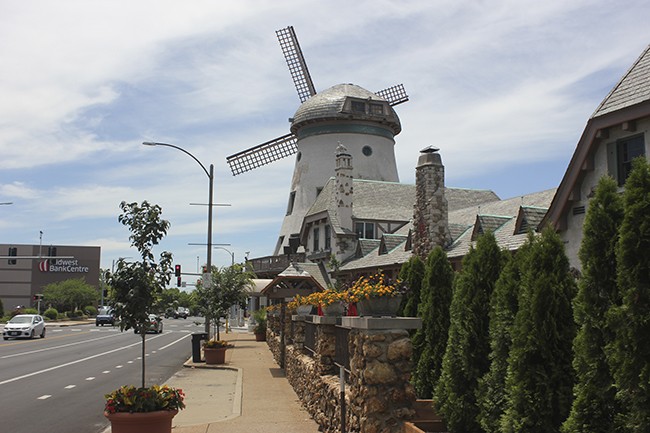 DOYLE MURPHY
The Bevo Mill, reborn as Das Bevo, reopened in May.

Tony Zanti walks up the sidewalk along the newly laid blacktop of Gravois Avenue as drivers zip past a string of revamped buildings on the north edge of Bevo Mill.

"These were all boarded-up buildings," he says, pointing at them one by one. "Boarded up. Boarded up. There used to be a building there, but they tore it down."

Now, the block includes one of the city's better Mexican restaurants, a hair salon and Gurlly Gurl, a women's clothing boutique decorated with a sharp pink logo that pops off the shop's dark windows. There's more good news — critical news for Bevo, really — just to the south. The towering Bevo Mill reopened in May, with a smart new German-influenced restaurant on site, more than a year after one of the former operation's partners bolted to Arizona.

"That's our flagship," Alderwoman Carol Howard says. "If the Bevo Mill is closed, it doesn't do well for the neighborhood."

Things had been a little bleak in Bevo. Bosnian refugees, who had filled and revived the neighborhood during the mid 1990s and early 2000s, still own businesses along the X-shaped commercial district of Gravois and Morganford Road, but they have nearly all moved to the county in search of safer homes and better schools for their kids. In the vacuum left behind, an old reputation for crime had begun to resurface as one of the neighborhood's defining features. Bevo Mill became a locator to orient news audiences during reports of double homicides, shoot-first robberies and, horrifically, a deadly hammer attack.

But now, with the old windmill spinning, brunch crowds flocking and trendy dive bars such as the Silver Ballroom and the Heavy Anchor proving they're here to stay, business owners like Zanti see new buzz around Bevo.

"It's the next Cherokee Street," he says.

Zanti, who quit high school and bought his first property at age eighteen, began investing in Bevo in 1999 with a used car lot and six cars. He now owns real estate all over the city, but the bulk of his holdings are still concentrated here on Gravois. He owns twenty buildings on this street alone.

Maybe it won't be the next Cherokee Street. Others along Bevo's main drag look toward the future and see the next South Grand, the next Grove or even the next Delmar Loop. Certainly, the district will never see an influx as big as the thousands of Bosnians who moved here in a very short time nearly a quarter-century ago. But Zanti envisions a wave of hipsters or Latinos, or "maybe a combination."

He unlocks one of his places, the shuttered Luna Lounge, which has been closed more than a year. It's all low lights and exposed brick. Zanti points out the arched opening where they expanded the space into the next room years ago.

But the show stopper is the bar itself. Carved in Germany for the 1904 World's Fair, the polished wood rises majestically to the ceiling. Anheuser-Busch used to rent out the bar from time to time to use as a backdrop for commercials, Zanti says.

He figures the old Luna would make a great "hipster bar" at some point. The rent is $2,000 a month, low compared to what he thinks he could ask in other parts of the city. Zanti says he could even charge more here, but he is looking for a tenant who will thrive in the new Bevo.

"I want someone who is going to make it," he says.

Until then, he keeps the door locked and waits.

To be clear, the Bosnians who came to Bevo are not really gone. On any afternoon, the booths of Caffe Milano coffee shop are filled with men of all ages, and a few women, drinking strong coffee and Coca-Cola in small glass bottles. The workers at Zlatno Zito Bakery and Deli speak almost exclusively Bosnian as they stretch the dough impossibly thin across back tables before whirling it into ropes of bread. First Bosnian Insurance Agency is open for business, and shoppers still wander the aisles of Europa Market in search of comfort foods they cannot find anywhere else.

It's just that now, most of these people go home at night to south St. Louis County or even Jefferson County. Ibrahim Vajzovic recently searched through voter rolls and estimates the number of Bosnians still living in south city is down to several hundred.

"Not many of us live in Bevo Mill anymore, but we are still connected to that area through our businesses," Vajzovic says.

He arrived in St. Louis in 1994 along with thousands of other refugees. The International Institute sponsored 6,900 and Catholic Charities' refugee services sponsored another 2,500. Those initial arrivals attracted tens of thousands more friends and family members until the metro area had what many believe is the largest concentration of Bosnians outside of Bosnia. International Institute President Anna Crosslin estimates as many as 50,000 settled here.

The institute helped place the first waves of newcomers in Bevo for practical reasons, Crosslin says: The neighborhood had a cache of affordable housing, and it was an easy bus ride to the organization's headquarters, which were then on South Grand.