Photo by Sara Louise Petty
Though the Waves split in the late '90s, singer Katrina Leskanich continues to sing the hits.

Certain songs find second lives long after after their original release. Katrina and the Waves' 1985 single, "Walking on Sunshine," may be the ultimate example of such a song. It did respectably well at the time, hitting No. 9 on the American pop charts. Rather than fade away, however, it has found a new audience via soundtracks and films — IMDB lists 61 such placements over the past 30 years.

Written by Waves guitarist Kimberley Rew, "Walking on Sunshine" is so over-the-top happy that it's suitable both for sincere and ironic purposes. In High Fidelity, Jack Black's cynical record store clerk pops it in the tape player in response to his sensitive coworker's Belle & Sebastian cassette. Look Who's Talking used it, but so did American Psycho.

"It's been in a lot of commercials," acknowledges vocalist Katrina Leskanich, calling from a tour stop in Tuscaloosa, Alabama. "'Walking on Sunshine' would be used for the moment where there's a switch in the plot from gray skies to blue skies, where it's all bad but then it's all good. You'll have a commercial that says, 'Bad allergies?' Then 'Walking on Sunshine' starts and they'll say, 'Claritin!'"

Leskanich, now Wave-less, is spending this summer as part of the Retro Futura Tour alongside such '80s acts as the English Beat, Howard Jones, Men Without Hats, Modern English, Paul Young and former Bow Wow Wow vocalist Annabella. "It's kind of a cross between being extremely exhilarating and fairly tiring," Leskanich says of touring. "Although now that we're settled in, I'm having some of the most comfortable sleep of my life on the bus. It always takes about a week to settle in. The key is to just be nice, say hello to everybody until you figure out who's who."

The product of a military family, Leskanich was born in Topeka, Kansas. "My father was stationed at Forbes Air Force Base in Topeka," she explains. "That's where my parents met and that's where they had the first three of six children." Although the family moved frequently, Kansas remained something of a home base. "We always always went on our holidays to visit my grandmother and my aunts and uncles, and we would stay with them for usually the month of July," she says. 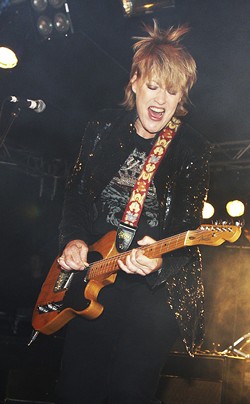 PHOTO VIA PARADISE ARTISTS
"Walking on Sunshine" is considered the crown jewel of EMI Records' catalog, with some 61 placements in movies and television in the past 30 years.

Most of Leskanich's early musical experiences stemmed from being a military kid. In Germany, she developed an interest in music; in the Netherlands, she acquired her first guitar; and in England, she met Vince De La Cruz, who later became the Waves' bassist. The two of them formed a band and spent a few years playing the military base circuit. "There were a lot of shout-outs for 'Freebird' and 'Sweet Home Alabama,' so we played them," Leskanich recalls. "And we just went round and round doing that for years. In the meantime I was bagging groceries at the commissary and washing dishes in the chow hall."

It was on this circuit that Leskanich and Cruz met drummer Alex Cooper. Cooper was playing with Rew, who'd recently left the Soft Boys. "Alex phoned and asked if we were interested in being in a band. I said yes, but we have to bring my friend," Leskanich says.

As simply the Waves, the quartet recorded the Shock Horror! EP and two tracks on the Rew solo album The Bible of Bop. Rew usually sang lead, while Leskanich sang backups and played rhythm guitar. These initial recordings were very much in the Soft Boys vein of psychedelic-tinged folk-rock. They were often a bit dark: The two Waves songs on Bible of Bop are entitled "Hey War Pig!" and "Nightmare." Even "Going Down to Liverpool," which appeared on Shock Horror! before the Bangles covered it, is a deceptively cheerful paean to Thatcher-era recession and underemployment.

"As time went on, Kim was sort of losing interest in being the lead singer," Leskanich recalls. "Back then it was still a great gimmick to be a woman in a band. So Kim started writing a lot of the material for me."

"Walking On Sunshine" was the band's only American hit. The follow-up, 1986's Waves, failed to sell. "That's when the payola scam [happened]," Leskanich says. "Capitol Records was at the forefront. It pretty much shut down any independent promotions that a lot of these companies were doing. And so we used that as an excuse for our second album bombing." The band still continued through 1997, recording six more albums for various labels and having the occasional successful single ("Sun Street," "That's the Way").

In 1997, Katrina and the Waves' "Love Shine a Light" won the Eurovision Song Contest for the United Kingdom. "I've given up trying to explain to Americans what [Eurovision] is all about," Leskanich says. "We had no intention of doing it. I'd never even seen the show before we did it. We were just asked if we had a great pop song for it. It almost worked against us, because we did win it and it went to No. 3 in the U.K. and did very very well all around Europe. But it's something you can never escape because nobody has won it in the United Kingdom. So every year when it's Eurovision time, then "Love Shine a Light" will be played and I'll always be asked about it."

The Waves split shortly after "Love Shine a Light," but Leskanich continues to release solo music on her own Katrina's Web label. She has also co-written travel guides to dog-friendly spots around London and Cornwall, and she is working on her autobiography, Don't It Feel Good.

For now, though, it's back on the bus for the Retro Futura tour, which concludes at the Family Arena on August 19. "The Midwest still resonates with me," Leskanich says. "You can't put your finger on why or how it should be familiar, but it just is. It's been a pleasant surprise to see the moon and familiar things still out here."