The Black Rep's Dot Portrays a Family Dealing with Alzheimer's

PHIL HAMER
It's Christmas time, and the Shealy family has reluctantly come together to discuss mom's Alzheimer's.

Shelly Shealy is at that point in her Christmas preparations where she's drinking straight vodka at 10 a.m., and it's only partially because of her mother's creeping Alzheimer's disease. Shelly's younger sister Averie, a former YouTube star, is living in her basement and the two sisters aren't speaking. She can't get her younger brother Donnie to answer her calls no matter how often she places them. And her best friend Jackie has just shown up in her kitchen, pregnant by a married man and on the run from the life she left in New York. This is what happens at Christmas when you're the responsible one.

Colman Domingo's dramedy Dot, which made its Off Broadway debut last year, is billed as a play about Alzheimer's, and it is. But rather than limit himself to writing a disease-of-the-moment story that's heavy on facts and short on story, Domingo has crafted a warm, wry and brutally honest story about how the disease affects everyone in contact with the patient. Domingo pulls no punches — Alzheimer's wreaks as much havoc on the family as it does on the victim — but he also shows how family can pull together to strengthen the ties that bind them, even as one member is slipping inexorably into the lonely distance.

The Shealy clan's bonds are tenuous when the story opens. Shelly (Jacqueline Thompson) has been essentially on her own in taking care of Dotty (Thomasina Clarke) for the past year, and the situation has taken on toll on both of them. Even Dotty's smallest lapses in memory — getting up to get salt and returning instead with Oreos — enrage Shelly to the point that she screams out loud. Thompson and Clarke play beautifully off each other, as Dotty circles back to the beginning of conversations to repeat all the questions of five minutes ago while Shelly stews, clearly tired of hearing the same stories and physically tired as well.

The source of most of Shelly's anger is actually her siblings. What she wants to do this Christmas is lay out a plan to manage Dotty's future, which will involve putting her in a managed-care facility of some sort. Shelly has it all planned out; she just needs money from Donnie and Averie. But that's something neither has. 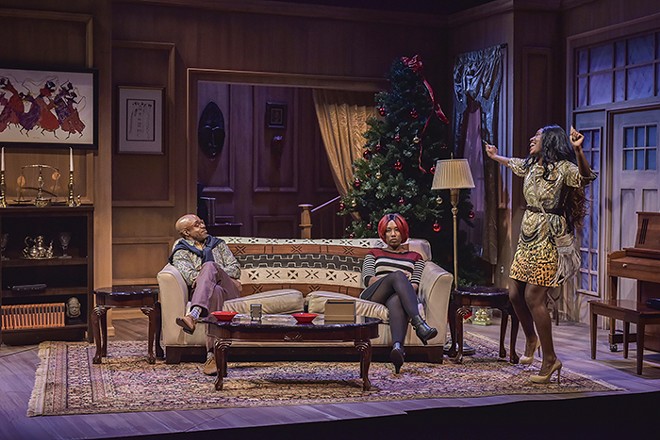 Instead, Donnie (Chauncy Thomas) has anger problems, relationship problems and a juice cleanse problem. He and his younger husband Adam (Paul Edwards) are at odds over everything, and Donnie refuses to admit how far his mother has regressed. Donnie refuses to admit a lot of things. Thomas is always good in everything he does, and here he sketches the arc of a son who strove for perfection and always finds himself disappointed with his own best efforts.

As for Averie (Heather Beale), nobody can tell her anything, mostly because she never shuts up. She's loud and dramatic, a one-woman reality show in search of an audience. Beale steals the show several times with Averie's insane rants and demands for attention.

Throughout the play Domingo finds his laughs in the relationships, never making jokes about Alzheimer's. Under director Ron Himes' expert guidance, the Shealy kids re-fight old battles, pick at each other's weaknesses and team up to mock the extra child, but they never joke about the disease that none of them except Shelly will name. Many of the jokes arrive as a means of derailing that conversation before it starts.

It falls to Dotty to wake up her offspring and make them communicate. Clarke gives a commanding performance, switching effortlessly from reliving happy memories of her past as an activist and community leader to confusion about who her children are. There are no visible signals when Dotty drifts away from the moment, no warnings. Clarke captures the chilling loss of lucidity that comes as the disease eats away memories, personalities and self.

Making them come clean about their fears is Dotty's last gift to her beloved children. What Shelly, Donnie and Averie believe will be their final Christmas all together as a family actually happened last year. Domingo ends not with one last joke, but with Dotty standing alone, her eyes vacant and her stiff arm rising and falling, waving goodbye to her children for the last time.