Missouri Senator Who Hoped for Trump's Assassination Will Keep Her Seat 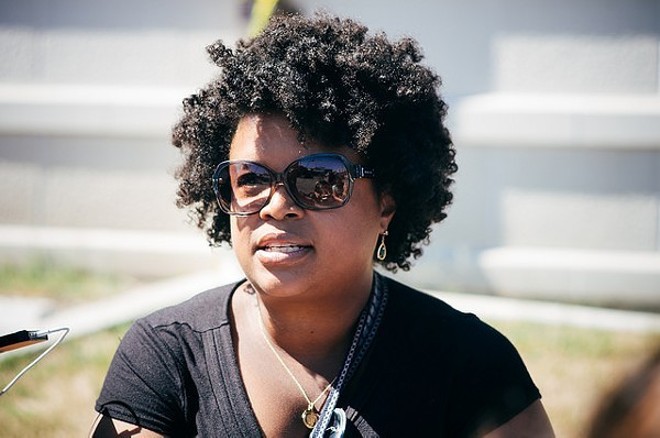 PHOTO COURTESY OF FLICKR/JAMELLE BOUIE
Maria Chappelle-Nadal
State Senator Maria Chappelle-Nadal (D-University City), who drew condemnation after writing in a Facebook comment that she hoped President Trump would be assassinated, will remain in the statehouse to represent her district — although she now has been formally censured.

Chappelle-Nadal had refused calls to step down, leading to a charge from Lt. Governor Mike Parson that she be expelled from the Senate.

But Parson's plan failed to gain enough support, and instead senators voted this afternoon to censure Chappelle-Nadal, as the Post-Dispatch has reported. That basically consists of a formal reprimand.

The censure passed 28-2, with only Senator Jamilah Nasheed (D-St. Louis) and Senator Kiki Curls (D-Kansas City) voting against it.

In a statement, Parson said he was super-bummed that he'd been unable to leave Chappelle-Nadal's district without representation:


Obviously, we are frustrated with some members of the Missouri Senate's decision to let Senator Maria Chappelle Nadal retain her seat. Make no mistake; this does not change my position that the Senator's actions are inexcusable. I totally disagree with these Senators' poor choice to let her remain in the Senate.

Parson had previously said he had "no desire to sit in the same chamber with an elected official who has called for the assassination of the president of the United States."

However, efforts to deal with Chappelle-Nadal's Facebook comment, which was quickly deleted, had lost a bit of steam after a Republican lawmaker, state Representative Warren Love (R-Osceola) called on Facebook for vandals who defaced a Confederate statue in Springfield to "be hung from a tall tree with a long rope." The call for a lynching has yet to result in any censure for Love, who has awkwardly defended his comments by claiming that he couldn't be a racist because he once co-captained a softball team with a black lawmaker.

In a statement released this afternoon, Chappelle-Nadal reiterated that she isn't going anywhere.

“Again, I apologize for the Facebook posting. However, I have made it clear that I will not resign. The voters of my district elected me to represent them. I will work tirelessly for the remainder of my elected term to bring about positive change for my constituents and all Missourians,” she said.

Other lawmakers and media outlets had pointed out that Chappelle-Nadal was engaging in a staring contest by refusing to resign. They noted that she'd keep her $1,746/month pension (beginning in 2029) if she resigned, but if she was forced out, she could lose it.

But after today's vote to censure, the outcome seems clear: They blinked.