Protesters March Through the Delmar Loop

PHOTO BY DANNY WICENTOWSKI
A pair of Olivette cops watch the protest go by.
Editor's note: We updated this post throughout the evening. Scroll down for the latest.

Protesters reacting to the acquittal of former St. Louis cop Jason Stockley are marching through the Delmar Loop — and have sat down in the middle Delmar's intersection with Skinker, entirely blocking traffic.

A jubilant group of about 200 to 300 took to the heart of the commercial district around 5:30 p.m., which straddles the border between University City and the city of St. Louis.

A drummer sustained a raucous beat as the group pushed through key intersections and toward Skinker.

Video captured by the RFT's Danny Wicentowski shows the scene around 6:20 p.m.


Soon after, the group sat down in the middle of the key intersection leading in and out of the busy commercial district. They sat for six minutes before getting up and marching south toward Forest Park.

PHOTO BY DANNY WICENTOWSKI
The crowd appears to be growing rapidly, with an estimated 1,000 people massed by 7 p.m.

Tonight's action, which follows a quick meet-up in Kiener Plaza, appears to be a continuation of the protests that took place earlier today at West County Center and Chesterfield Mall, which sought to impose an economic consequence for the injustice they see in St. Louis. That also fits with the location chosen for last night's protest, which targeted the Central West End.

But while last night's march ultimately drew a huge police response — and lots and lots of tear gas — so far on the Loop few cops are visible, and the mood is good.


Around 8:30 p.m., the protesters again blocked the intersection of Delmar and Skinker. "You can't stop the revolution!" they chanted.

So far, tonight, no one has tried.

After blocking the intersection, the protesters moved back down Delmar to the Cicero's parking lot — but not before state Representative Bruce Franks (D-St. Louis), who was a prominent protester during Ferguson, took to the megaphone and told protesters to meet up again tomorrow at 3 p.m. at "20th and Olive." That's the site of the police headquarters.

An organizer then announced, "This action is over."

As of that announcement, at 8:50, there had been no arrests, no standoffs and no fights.

Franks strongly encouraged those in the crowd not just to stop marching, but to go home.

"We did it differently," the protester-turned-state rep continues. "They expected us to do something else; we did it like we were supposed to do it. Leave together as a family."

About 100 protesters remained in the Loop after Franks' admonition. Around 9:30 p.m., they began to march down Delmar and then turned onto Skinker and headed south.

PHOTO BY DANNY WICENTOWSKI
In the small remaining band, however, were some teens who seemed interested in stirring things up.

University City sent out a line of cops, some with riot gear, and a few of the protest group threw water bottles at them — even as others in the group begged them to desist.

PHOTO BY DANNY WICENTOWSKI
The cops formed a line on Delmar around 10:15 p.m. But for about 30 minutes, everything was stuck in a faceoff. Protesters faced down cops, who didn't push back.

Update. Protesters and riot cops from several jurisdictions in a standoff. No physical altercations, no more thrown objects. #JasonStockley pic.twitter.com/ODXXvMNne5


But around 10:45 p.m., cops began compelling the protesters to move back, forcing them south towards Skinker.

In the chaos of that push, someone threw something — and shattered the window of the Starbucks on Delmar.

In rapid order, the cops made their first arrest — a young white male, who was carried out by all four limbs.

PHOTO BY DANNY WICENTOWSKI
It it not clear if the man was the one who broke the Starbucks window.

At that point, some protesters began to agitate, and the officers ordered them to back off. "Back up or you're going to get sprayed!" 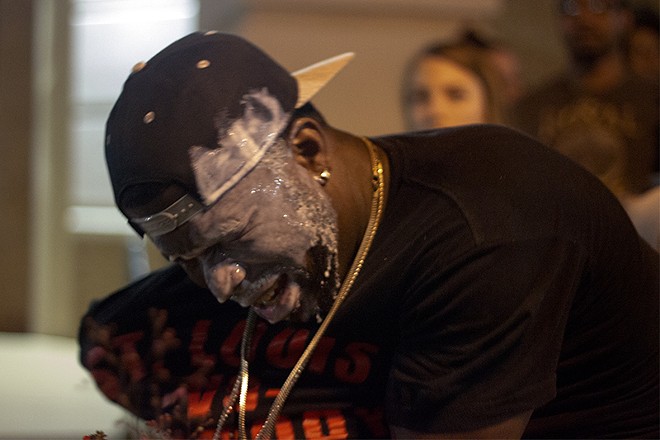 PHOTO BY DANNY WICENTOWSKI
Bystanders treated a man affected by police pepper-spraying by pouring milk on his face.

The cops then deployed pepper spray. Three people appear to have been affected.

Then at least a half-dozen more windows — possibly many more — were smashed in rapid succession, including those at Three Dog Bakery, Loop Living Furniture, Iron Age Tattoo, oso: Style Lab and Salt + Smoke.

Police again ordered the crowd to disperse and a group of young men, who appeared to all younger than 21, could be seen chucking patio tables through storefronts.

At least six people have been taken into police custody, and now city cops appear to be on the scene in addition to those from University City and Webster Groves.

Police do not appear to have ever used pepper spray, and by 11:20 p.m. or so, just about everyone seems to have left the streets.

Earlier tonight, Mayor Lyda Krewson issued a statement stressing that the protests have been "mostly non-violent" and urging people to continue to get out and about.

"I encourage everyone to go about their lives," she says. "The balloon race is still on, libraries are open normal hours, and small business owners would love to see us. We've included the statement below in its entirety.

It may not look like it in the media, but yesterday's protests were mostly non-violent.

Unfortunately, we had incidents of sporadic violence and vandalism that will be the lasting images written about and played on television. As I’ve said over the past several days, we will protect the rights of people to protest, demonstrate, and have their opinions heard. We draw the line at violence. We understand the desire to disrupt but we will not understand destruction or hurting people. We will protect all of our residents.

Thank you to law enforcement and all first responders for putting themselves on the line. And thank you to the protesters who remain non-violent and who discouraged others from acting violently. As most of you know, a couple of concerts have been canceled this weekend. I am disappointed for those of you with tickets - however the issues being protested are real impediments to our success as a city.

The decision to cancel the concerts had to be made early. The police department is able to provide the standard level of protection, but with mandatory overtime the additional off-duty officers that would normally help out, were likely not available. The cancellation is disappointing for concert goers, but also for all of the folks who make a living working these events.

I encourage everyone to go about their lives. The balloon race is still on, libraries are open normal hours, and small business owners would love to see us.

Editor's note: We updated this post throughout the evening.