Screen grab via komu.com.
A bar in the Lake of the Ozarks turned two NFL jerseys into a doormat — spelling out "Lynch Kaepernick." Not surprisingly, that bar is now facing accusations of racism.

Owner Jason Burle told KOMU that he started his bar, SNAFU, near the Bagnell Dam as a way to honor military veterans, with military discounts, a "hall of heroes" and flags mounted on the wall. A former member of the U.S. Air Force himself, Burle told the mid-Missouri TV station that NFL players kneeling during the national anthem didn't sit well with him.

So, in response, Burle ordered two NFL jerseys — one of Marshawn Lynch and the other of Colin Kaepernick — to use as a doormat outside the bar. Kaepernick, of course, set off a firestorm by "taking a knee" last year, a silent criticism of racism in the U.S. that has since triggered a national movement. Marshawn Lynch has also joined in the demonstrations (although why he was chosen out of all the others following Kaepernick's lead is something astute readers may speculate about).

The doormat display apparently went over just fine with patrons until a guy named Taylor Sloan took offense and put the bar on blast.

“That’s not the Missouri I know,” Sloan told KOMU. “It just kind of upset me really bad. Put a bad taste in my mouth.”

Sloan took a picture of the jerseys and took to the SNAFU Facebook page to express his disgust, posting to the page and giving the bar a one-star review on Sunday.

"There's a reason why the NAACP issued a travel warning for Missouri," Sloan posted. "Pretty obvious the lack of professionalism at this bar. You lost my business the moment you decided to showcase this kind of behavior."

A heated conversation with Burle followed. 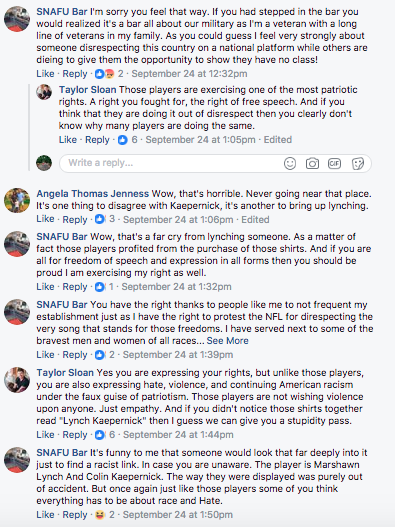 Screen grab via Facebook.
Since then, SNAFU has been a hot topic, drawing both support and criticism. 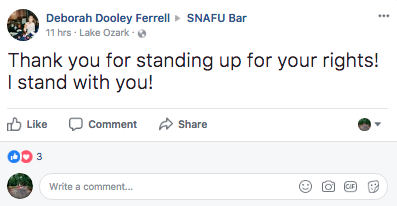 Screen grab via Facebook.
Despite the controversy, Burle stands by his use of the jerseys, both on social media and in interviews since then.

He did, however, send a photo to KOMU on Tuesday showing that he changed the placement of the jerseys, which can be seen in the TV report below. They're still doormats, only now they spell out "Kaepernick Lynch." 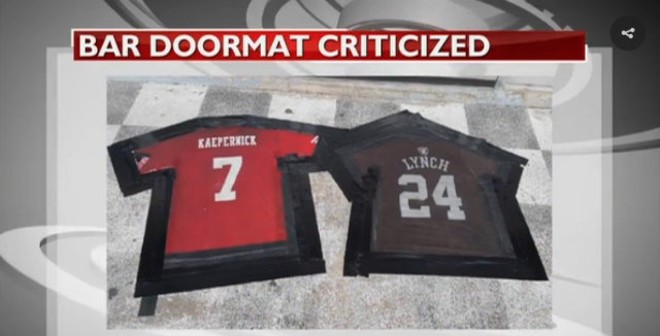 "It's not a race thing. A lot of people want to twist it around to be a race thing," Burle told KOMU. "They were placed the way they came out of the box. I ordered them together, pulled them out of the box, taped them down. There was no ill intent."

He also told the station that he acknowledges the players' right to kneel, but that he also has the right to disagree with it.

“I commend them for what they’re doing, as far as the right goes. I fought for that right. The same thing that gives them that right gives me the right to place these out here."