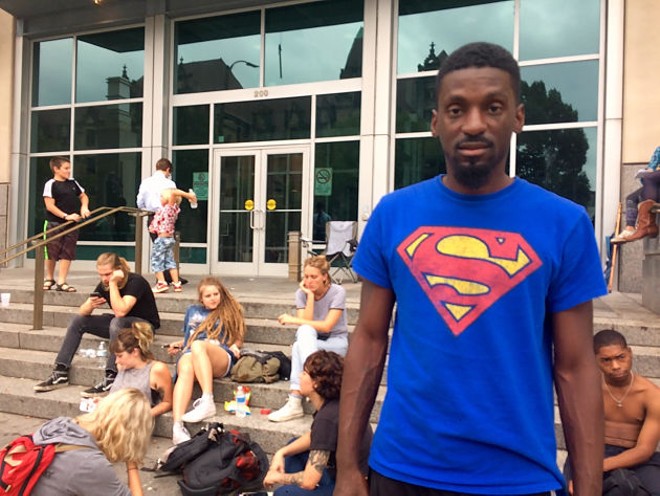 Photo by Daniel Hill
Bruce Franks stands outside the Justice Center downtown after being released Wednesday afternoon. A group of forty or so people continued to wait for the rest of the protesters to be released.
Throughout the weeks of sustained protests that have gripped St. Louis since former police officer Jason Stockley was found not guilty of murder, state Representative Bruce Franks (D-St. Louis) has been an indefatigable leader on the front lines, leading chants, instructing the crowd on protest actions and negotiating peaceful resolutions with officers during particularly tense moments.

Today, though, he looks a little tired.

It is 3 p.m. at the Justice Center in downtown St. Louis. Franks is one of 143 people arrested Tuesday night when protesters took to the highway, blocking I-64/40 for more than a half-hour. Tents are set up on the sidewalk, with fellow activists camping out overnight while they wait for their comrades to be freed. People have been released in a slow trickle throughout the day; Franks just got out about an hour and a half ago.

Those inside, he admits, knew in advance that there was a good chance they'd be going to jail.

"We knew it was a high possibility that we would get arrested," he says. "We tried to organize around making it as safe as possible and not get arrested, but we know that's always a possibility. And whenever we talk about going onto the highway, I mean — that risk goes all the way up."

Franks, along with multiple others on scene who were arrested and released today, were charged with trespassing on the highway. Franks takes issue with that charge. "I don't know how you trespass on something you pay for," he says.

Furthermore, he says that many of the people who were arrested hadn't even been with the group that blocked the road. He says "a good portion" of those charged were not involved. "It wasn't 168 of us on the highway, so..." he says, trailing off.

The group had marched off the highway via the Jefferson Avenue exit. Videos from the arrests last night show police ordering a group, which they had boxed in on Jefferson at its intersection with Market Street, to sit on the ground. The group complied, and then one by one members were approached and zip-tied before being led away.

The arrests looked far more peaceful than those at the Galleria on September 23, which some elected officials and faith leaders have referred to as a "police riot," or those at the intersection of Washington Avenue and Tucker on September 17, when officers kettled protesters, media and residents alike while laying down a liberal amount of pepper spray.

Still, according to Franks, these latest arrests were not entirely without incident.

"There were a couple of officers in the back that, in order to unlock some people's arms, they took their shields and hit their arms," he explains. "Which pissed me off. They hit women. Women and men. Older women. Just tried to jam their arms." Franks says he witnessed it happen to "three or four" people.

Still, he doesn't expect that the arrests will slow the protests down. Quite the opposite, in fact.

From here, "it strengthens. It gets bigger," he says. "One of the arresting officers made a comment, said, 'I bet this will teach y'all about protesting.' I said, 'If that's what you gathered out of this, you need to go back to the drawing board.'"

Franks has experienced some pushback as an elected official for taking such a central role in the protests. State Senator Bill Eigel (R-St. Charles County) tweeted, "Is that....is that State Rep @brucefranksjr inciting folks to unlawfully block an intersection?"

In a second tweet he wrote, "You swore to protect MO constitution perhaps that doesn't extend to state law." State Representative Nick Schroer (R-O'Fallon) announced today his plans to push a bill that will increase criminal penalties on those impeding traffic.


But Franks, who made his name as a frontline protester in Ferguson in the aftermath of the killing of Mike Brown, says he will not be deterred — neither by the criticism of colleagues, nor by fatigue.