The Coens make a '40s comedy with a Cary named Clooney 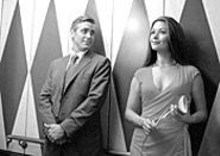 It's beginning to look as though the films of George Clooney are less works of fiction and more the products of documentary crews following around the actor leading his enviable life. In film after film he's seen dining with beautiful actresses in gorgeous surroundings perfectly lit for an evening's seduction: Jennifer Lopez in Out of Sight, Julia Roberts in Ocean's 11 and now Catherine Zeta-Jones in Intolerable Cruelty. There may be a slight variation on a theme -- he's playing cool, going straight or smarting off -- but always he's the consummate flirt, a thicker and jockier Cary Grant carrying on with honeys unattainable to mortal men. The women always say they have no interest in Clooney but inevitably wind up playing a little one-on-one nonetheless. They can't resist the sly, wry grin perched above the square jaw: Say, didn't you used to be Batman?

In Intolerable Cruelty -- directed by Joel Coen from a screenplay that not only bears his name and that of brother Ethan, but also those of Big Trouble's Robert Ramsey and Matthew Stone -- Clooney's grin is even whiter than usual, a Clorox kind of blinding. When first we see him, as divorce attorney Miles Massey, Clooney's having his mouth forced open and teeth whitened and is still managing to conduct a phone conversation with his assistant, who doesn't need to understand her boss to know what he's saying. He speaks in the shorthand lingo of the hustler, the attorney who never loses even when his clients are guilty of all brands of misbehavior -- adultery, for starters, or forcing their wives to play with sex toys made from spare vacuum-cleaner parts. Miles, with his bang-bang chit-chat and side-of-mouth delivery, also sounds like Howard Hawks' version of Cary Grant in His Girl Friday and I Was a Male War Bride -- both written by Charles Lederer, who penned the original Ocean's 11, making this a very circuitous homage indeed. All he's missing is the vaguely masked accent, Iowa by way of Bristol.

Miles is smug (he's always chuckling to himself, as though he sees the world as nothing but unattractive buffoons at the bottom of the golden ladder on which he's perched), bored (he can't bother to move a muscle even when hitting tennis balls) and vain (he's always checking his newly whitened teeth in any reflective surface available). In short, he's the perfect divorce lawyer, someone who believes in the job like a religion because he knows no love except self-love. He has faith only in the inevitable destruction of love and the decimation it will wreak upon those who are suckers enough to buy into its illusions. And he knows the judicial process is a fraud; how else can he garner millions for philanderers and leave penniless those who've been wronged in bad relationships?

But he's born again when Marilyn Rexroth (Zeta-Jones), wife of one of his unfaithful clients, saunters into his office. She loathes him for humiliating her in court -- he calls as his star witness a concierge who recalls her desire to meet a would-be husband with "a wandering pee-pee" -- which only makes him want her more. Besides, deep inside Miles is the fear he will end up like his ancient partner Herb (Tom Aldredge), who appears to have been born before law was invented, babbles incessantly and insanely about billable hours and never leaves his office and life-support machinery. If, as one character says, "getting laid is like a game of Russian roulette" these days, Miles sees in Marilyn someone worth spinning the cylinder for. It will inevitably lead to his Jerry Maguire moment, his "Love is Good" speech that converts an audience of non-believers. And that's well before the movie's over.

Used to be the Coen Brothers handled betrayals and indiscretions with a little murder and blackmail, but the film-noir fetish on display in Blood Simple and The Man Who Wasn't There has given way to screwball shenanigans -- the broad yuk, the over-the-top performance, the silly alliterative names, the caricatures within a satire within a parody. Intolerable Cruelty is populated by cretins and buffoons, slimy lechers and gotcha private dicks; their archetypes are from the black-and-white comedies of the '40s and the con-jobs of the '50s. Only Zeta-Jones seems to be someone who could exist in the real world; hers is a fierce temperament, the vibe of someone not to be fucked with. Everyone else is so broad they can barely fit on the screen, not least of all Billy Bob Thornton's Howard D. Doyle, a rhinestone cowboy who tells Marilyn, during their wedding, "I love you like a son of a bitch." And no character's more memorable than Cedric the Entertainer's Gus Petch, who videotapes illicit encounters while shouting, repeatedly, "I'm gonna nail your ass!"

The first half of Intolerable Cruelty is more than tolerable; it's a dopey kick full of goofy jokes tossed off so quickly you're reminded less of bickering-bantering Grant and Rosalind Russell than Groucho and Chico Marx. (This is the kind of movie where someone asks, "What do Ivan the Terrible, Attila the Hun and Henry the Eighth have in common?" and someone else responds, "Their middle names?" Why a duck, indeed.) And the Coens bring out the goofy best in Clooney; he's a matinee idol with a big red nose and clown shoes. The movie bogs down toward the end -- too many twists, as screwball turns screw-over -- and it's bound to be dismissed as trivial even by the Joel and Ethan faithful, but that's what they said about The Big Lebowski before it turned into a masterpiece.

Jump to comments
Half Great »