A boy in the (pretty nice) hood, Bow Wow strikes it rich in Lottery Ticket 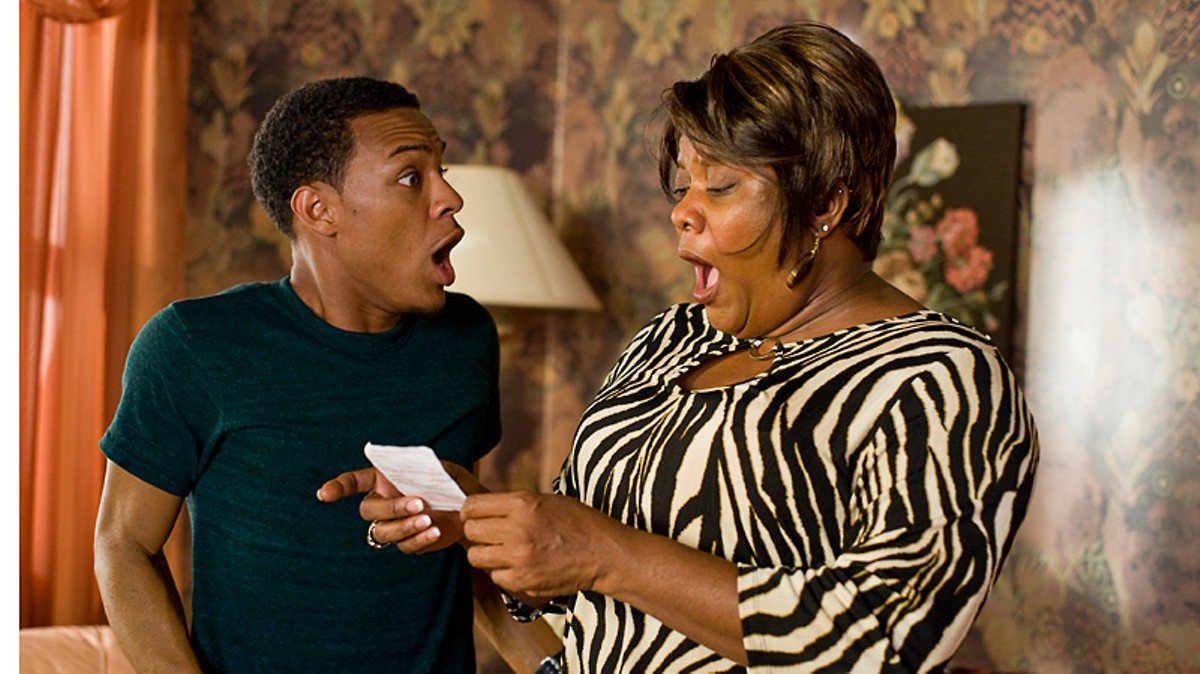 A boy in the (pretty nice) hood, Bow Wow strikes it rich in Lottery Ticket

Midway through Lottery Ticket, a teen-comedy-cum-wish-fulfillment fantasy, the movie's hero, Kevin Carson, goes on a spending spree. The holder of a $370 million lottery ticket that he can't cash in until after the July 4 holiday, Kevin accepts a $100,000 loan from a local gangster, and proceeds to spend it all in one night. He and his buddies ditch their Atlanta project and hit electronics stores, jewelry shops, and fancy restaurants. They buy out the Foot Locker from which Kevin was recently dismissed. (The hated manager who fired Kevin looks on in dismay, although we know he's going to get a raise for exceeding his monthly sales quota in a hot minute.) And Kevin gets a striptease from the hottest girl he knows.

Because Kevin is played by the rapper Bow Wow (né Lil' Bow Wow), it's tempting to view this section of the film as aspirational autobiography. This is basically how Bow Wow lives most of the time, right? The kids in the audience at my screening cheered wildly for every scene of Kevin's cash frenzy, loudly approving of the bling and the shoes and that fine, fine ass. It would be pretty sweet to have that much money!

Credit Lottery Ticket for honesty, I guess, in never making an argument against being fabulously wealthy. Though Kevin—who early in the movie speaks truth to power about the lottery as a tax on poor people, and gets called "Urkel" and "Martin Luther King" for his troubles—will eventually learn to be more careful with his windfall, Lottery Ticket isn't exactly a cautionary tale. At no point does anyone suggest that Kevin give the $370 million back, or hand it over to orphans, or anything. The theme of this formulaic but vibrant ensemble comedy could best be described as a paraphrase of Biggie's well-worn credo. Mo' money, mo' problems—but mo' money, yeah, definitely.

And Ice Cube, a producer on the movie, plays...well, there's no easy way to say this to readers of a certain age. Ice Cube plays an old head, a retired ex-boxer named Thump who, in Benny's memorable description, "still got slave dust on him." Sure, Cube's hair has been whitened by a makeup artist, and he's putting on that old-man voice, but still, watching him putter around telling stories of bygone days is a sorry reminder of just how very, very long it's been since Friday, the movie that perfected the template from which Lottery Ticket was drawn.

Lottery Ticket, of course, is a lot more innocent than that classic. Bow Wow never quite manages to tap that fine, fine ass; in fact, he's set straight by its owner, Nikki (Teairra Mari), who points to her body and notes, bitterly: "This is my lottery ticket." Guns are waved, but never fired. This housing project is free of drugs; so rare is crime, apparently, that Lorenzo Mack's brief stint in prison makes him the most terrifying nemesis imaginable. In the world of this movie, violence has no collateral damage, and the ills of poverty can be solved through a generous donation from a lottery winner and the hiring of an elderly boxer as a security guard.

It's comforting, really, to see the movie's soft-pedaling of actual ghetto problems; realism isn't Lottery Ticket's game. After all, in the real world, peer pressure and multiple beatings would have forced Kevin to shave that terrible little goatee Bow Wow insists on sporting. And in the real world, director Erik White, who has a terrific sense of composition and shoots crisp, energetic chase scenes, will use Lottery Ticket as a calling card for plenty of bigger jobs on tougher, grittier, more violent movies. They might be as stupid as this one, but they probably won't be as much fun.