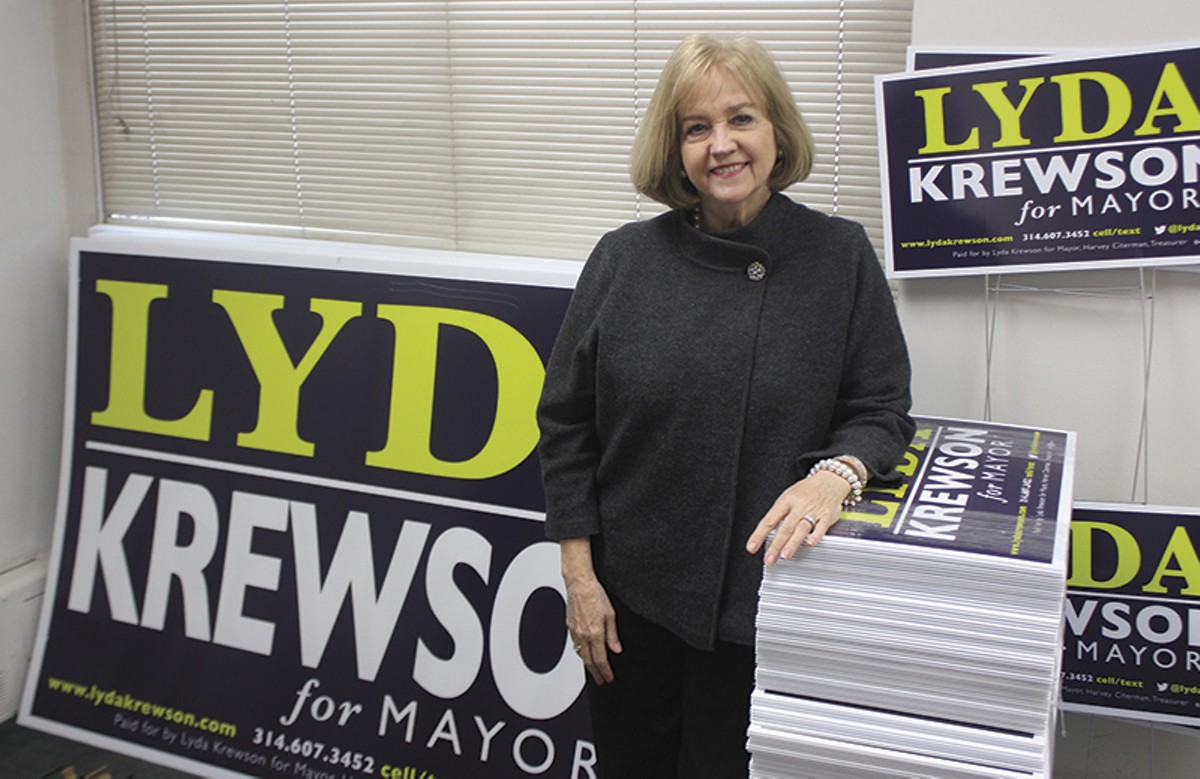 Krewson, whose husband was murdered decades ago, calls crime the top problem the city faces.

That's the starting point of Krewson's campaign for mayor.

See also: Profiles of all five leading candidates for mayor

An early entry into what has become a crowded race, the 64-year-old alderwoman from the Central West End has made fighting crime her top priority.

"I think neighborhood safety is job one for the next mayor," Krewson says.

It is not a revolutionary platform, or even unique among a Democratic field with at least three, maybe four or even five legitimate contenders. But then Krewson is not a revolutionary. Her twenty-year political career has been defined by a centrist resume. She successfully pushed a long-overdue city smoking ban and found compromise on the hotly disputed minimum wage bill, proposing the $11 an hour plan that eventually gained passage (though it must still survive a court challenge). Her personal style is direct but civil in the model of soon-to-be former Mayor Francis Slay. She is not a shouter and is maybe the candidate least likely to get sucked into a Twitter battle. (Social media in general is not her natural arena. On December 19, she tweeted "I have joined @instagram!")

But she has also shown herself to be steely when necessary — the most obvious example was her resilience from the murder of her husband in 1995. She was in the car with him and her son and daughter, ages two and five, when robbers shot Jeffrey Krewson in front of the family's home.

She was elected two years later to her first term as alderman for the 28th Ward, a district that surrounds Forest Park on three sides. Her push into city politics had something to do with the murder of her husband, but it was not the straight line that some have drawn, she says. Krewson saw it as a natural progression from the neighborhood volunteer work she had done before the tragedy.

On the Democratic spectrum, she's been unsurprisingly progressive on gun control, swung to the right when it comes to tax breaks for developers and falls somewhere in the middle on other liberal causes, such as raising the minimum wage.

While opposing candidates have called for firing the police chief or shutting down the city jail known as the "Workhouse," Krewson's plan for cutting crime has at its spine more and better-paid cops. She has laid out a proposal that calls for $33 million in public safety spending. The bulk of the money — $25 million — would go toward hiring another 200 police officers, training them better, equipping them better and raising their salaries to compete with their counterparts in the county. The remaining $8 million would be split across a variety of other strategies, including $2 million for youth recreation programs and another $2 million to support drug courts or other alternatives to incarceration and prosecution.

Krewson, chief financial officer for the St. Louis-based design firm PGAV, says she thinks she can find much of the funding within the city's budget, but will make up any gaps if need be.

"I just don't know what our city will look like if we don't spend the money," she says.

The St. Louis Police Officers Association is backing Krewson, an endorsement ridiculed by some of her opponents. Treasurer Tishaura Jones and Alderman Antonio French point to the union's controversial business manager, Jeff Roorda, who has equated the Black Lives Matter movement with a "war on police" and blamed President Barack Obama for the killing of Dallas police officers in July. "THIS BLOOD IS ON YOUR HANDS, MR. PRESIDENT" Roorda tweeted along with a gruesome image after the attack.

"It is impossible to stand for change and sit with Jeff Roorda," Jones wrote to the St. Louis American after the union's endorsement.

Krewson bristles at the mention of Roorda during an interview with the Riverfront Times.

Krewson insists her support comes from the union's nearly 1,200 members. She says she is not embarrassed to stand with the police officers, and that does not preclude her from supporting social justice reforms.

"Personally, I think it's completely possible and likely that you can support both police officers and Black Lives Matter," she says. "Those two things are not incongruous."

For his part, Roorda says Krewson was a clear choice for the endorsement. The police union interviewed all the major candidates, except Jones, who declined the meeting. (French has claimed he was not seeking the union's endorsement but had a constructive conversation with its leaders.)

"Lyda has been a dependable pro-police vote," he says. "She's not some patsy. She makes us make our case, but she usually sees things our way on matters of law and order."

Police want a candidate to hear them out, and Krewson has been willing to do that, Roorda says.

"That's all we want out of a mayor is someone that will sit down and listen to us and hear us, that may not be with us or embrace our position on everything, but will give us a fair hearing," he says.

Krewson announced her candidacy in June, following Board of Aldermen President Lewis Reed into the race. The early entry has allowed her plenty of time to organize and raise money. She had the most money on hand — more than $403,600 — at the end of a quarterly finance report released in October. A half-dozen staffers manned her Lindell Boulevard campaign office during a recent visit. A new shipment of 1,000 yard signs was piled in a second office down below. Early filings show sizable donations from her design firm employer, real estate firms and hoteliers, including $15,000 from the management company for the Ballpark Village Hilton.

Developers have long come to Krewson and aldermen in neighboring wards for tax breaks. It comes with the territory of representing well-heeled areas where developers want to build, but Krewson says she carefully reviews proposals and often rejects projects or negotiates incentive packages far below the original requests. Done right, tax abatement can improve a neighborhood and increase badly needed density by encouraging a project that might not otherwise get done, she says. Done wrong, taxpayers unnecessarily gift money that could go to schools or other city bills.

Krewson concedes it can be a tricky balance. She recently supported a proposal for ten years of abatement — 50 percent for the first five years, 25 percent for the second — for a proposal to build five townhouses on Westminster Place, just north of Cathedral Basilica. Formerly used by a convent and later other nonprofits, the property has been tax-free for decades and the developer's efforts will almost certainly result in sales to well-off buyers. Critics say it is a prime example of the city throwing money at property in a high-demand area that does not need taxpayer support.

But Krewson sees it as a place to compromise: a few years of abatement for the greater good of getting the property back on the tax rolls.

"There's both numbers," she says, "and there is an art to making a judgment."