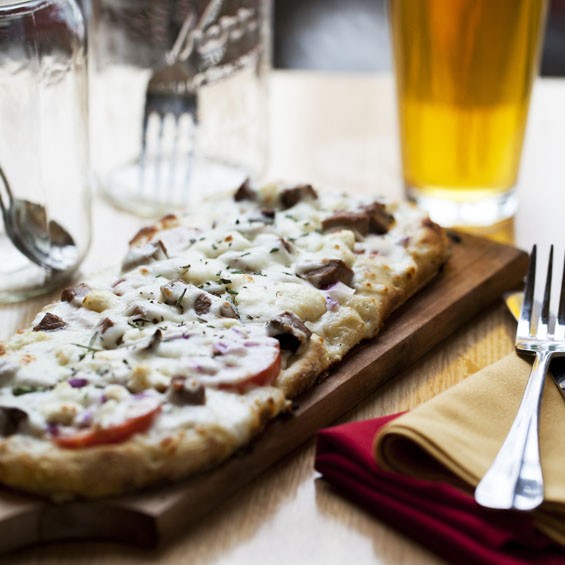 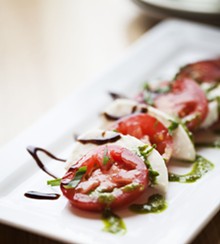 Crushed Red has a problem any other restaurant would kill for: Not yet three months old, this fast-casual spot in Clayton is often so busy that it needs an employee to direct traffic. Sometimes during the peak of the lunch rush, it needs two traffic cops. One takes your order (or, if you want a salad, directs you to the cooks who'll prepare it for you), but not before ascertaining to her satisfaction that there's a sufficient quantity of empty or soon-to-be-empty seats to accommodate your party. The other stands at the top of the staircase that leads up from the street-level entrance into the restaurant proper. Her task is to make sure that the line to place orders, which has already wound its way out of its prescribed area, maintains its form. (She also hands out paper menus, because it's going to take a while for you to get close enough to be able to see the menus projected on flat-screen monitors near the head of the line.)

If indeed you want a salad — and you very well might, given that Crushed Red specializes in pizzas and salads — the line to order turns into the line to wait till your salad's ready. And regardless of what you order, you'll need to stand in yet another line to pay. There are no more traffic cops. Not yet, anyway.

Crushed Red is the latest venture from prolific local restaurateur Chris LaRocca. (Only two weeks ago, I reviewed another of his recent projects, EdgeWild Restaurant & Winery in Chesterfield.) Here he's joined by chef Jason Tilford of Milagro Modern Mexican and Barrister's, who also consulted on the menu at EdgeWild; Mike Marino, the former national bakery director for Panera; and local father-son entrepreneurs Ralph Kalish Jr. and Powell Kalish.

To fill what the five partners see as a lack of fresh, wholesome food in the ever-growing fast-casual field, they've positioned Crushed Red as an "Urban Bake & Chop Shop." (The partners trademarked that, by the way, in case you were pondering opening an urban bake & chop shop of your own.) "Urban" is an arguable word choice when you've hung out your shingle at the corner of Maryland and North Meramec avenues, in the space formerly occupied by Blick Art Supply; I prefer to think of the concept as "Urbane Without the e." (Don't even think about it; I've already filled out the trademark paperwork.) A single, airy dining room features an open kitchen and retro-hip touches including exposed brick and light fixtures made out of repurposed Mason jars.

The menu is split between pizzas (there's your bake) and salads (chop). There are a few simple appetizers: slabs of fresh mozzarella and tomatoes, dressed with basil pesto and a balsamic reduction; thick hummus with a strong chile kick and a trio of soups of the day. The butternut squash soup was quite good — thick but not creamy, with just a hint of spice (perhaps nothing more than a dash of black pepper) to balance the sweetness of the squash.

You can order one of Crushed Red's "crafted" pizzas or build your own from the lengthy list of sauces, cheeses and toppings. The pies are all one size, built on the foundation of a whole-grain crust stretched by hand and then shaped into an oval roughly ten inches long — a good size for one diner. The crust is thin, crisp on the bottom, lightly chewy around the rim and tasty in an unobtrusive way.

Most of the "crafted" pizzas are of the moderately upscale ilk. The "Mona Lisa," for example, starts with a skim-coat of extra-virgin olive oil blended with roasted garlic, then topped with kalamata olives, baby spinach, feta and chèvre. The result is on the salty side; it would work better with only one of those cheeses, or half the total quantity of both. The "Big Island" classes up the so-called Hawaiian pizza by replacing the Canadian bacon with prosciutto and grilling the pineapple to add depth of flavor. Similarly, the "Chipotle BBQ Chicken" takes an abomination that would cause a Neapolitan to break out in hives and turns it into a treat (albeit — let's face it — not a pizza), simply by pairing a very spicy barbecue sauce with tender roasted chicken.

Crushed Red's best pizza is also its most conventional: a good, simply seasoned tomato sauce (organic, quoth the menu) with pepperoni, sweet Italian sausage, mushrooms and shredded mozzarella. It manages the not-easy trick of being the sort of light, quick meal you want from a fast-casual restaurant, while satisfying as, well, a pizza.

As with the pizzas, you can choose a "crafted" salad or have one assembled from a wide assortment of greens, vegetables, fruits, beans, cheeses, meats, dressings and what the menu artfully calls "crunch": nuts, croutons and the like. Whether "craft"-ing or taking direction from you, a cook tosses together your ingredients (minus dressing and crunch), dumps them onto a cutting board, chops the bejeezus out of them, scrapes them into a bowl (plus dressing and crunch) and hands it to you.

Tough to say whether the performance adds anything to the salad, but the two I tried — the "Hail Caesar" (romaine lettuce, Parmesan cheese, croutons and a creamy dressing) and the "Cowpoke Smoke" (tender, smoked brisket and very spicy fried jalapeño "straws" with field greens, tomatoes, red onion, blue cheese and green goddess dressing) — were good.

The separate salad assembly line does cause confusion, though. First-timers who order pizza don't necessarily know they can skip the green line and pay.

A third traffic cop should do the trick.