A Part of Me reveals Katy Perry's essential Katy Perry-ness 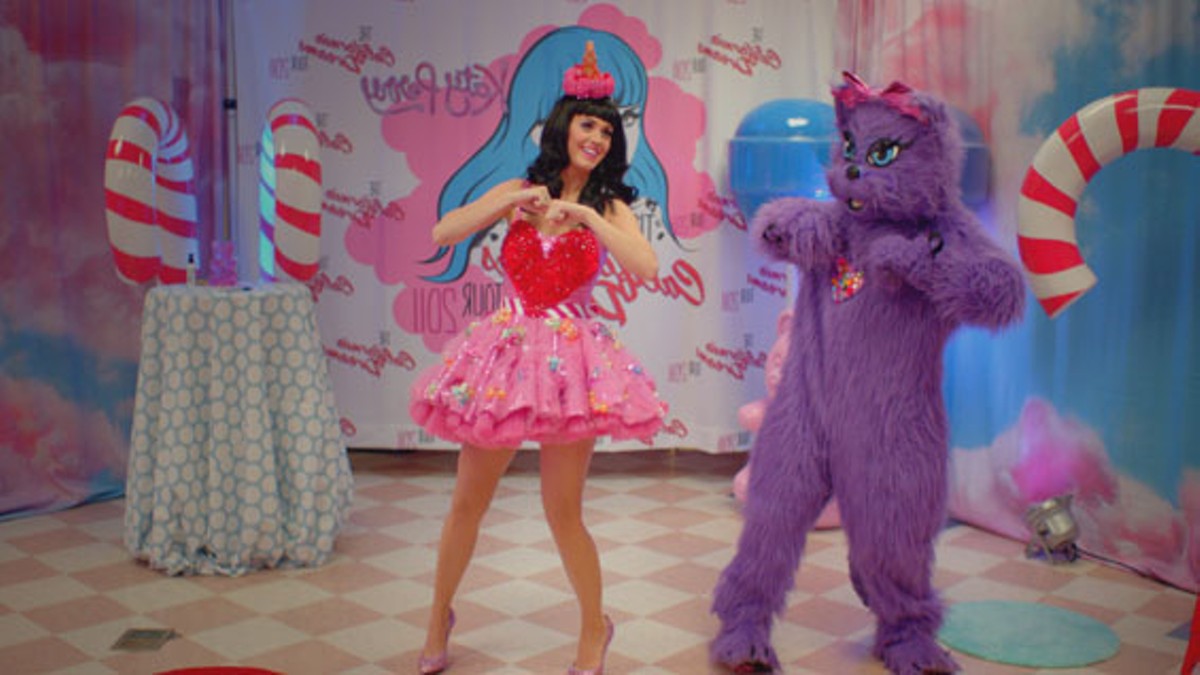 A Part of Me reveals Katy Perry's essential Katy Perry-ness

From bubblegum-bi-curious novelty "I Kissed a Girl" on, Katy Perry has built a career on glorious brain-dead-with-a-wink odes to playacting in a fantasy space of total acceptance and no consequences, sold to children with literal sugarcoating. Her hits are powerful stuff, coming from an artist who was raised by Pentecostal preachers who declared most contemporary culture and anything involving fairy-tale-style magic off-limits. In Katy Perry: Part of Me, those parents gush with support for the daughter who penned the chorus, "I wanna see your peacock, cock, cock." The film (presented in never-less-necessary 3-D) documents Perry's 2011 world concert tour to support her massive Teenage Dream record and weaves together onstage and backstage footage with interviews with Perry and her team, while home movies and video diaries dating back a decade suggest Perry has been calculatedly filming herself in preparation for this moment.

An advertisement of a product targeted at people who are already consuming it, Part of Me is completely uninterested in the contradictions that propel Perry's persona. Instead, directors Dan Cutforth and Jane Lipsitz track Perry's odyssey from failed teenage gospel singer to Alanis Morissette wannabe to world-beating superstar who learns while on tour that she has broken the record for most No. 1 singles off a single album for any female star, ever. But fame, it comes at a price!

The filmmakers seem primarily interested in the tour itself as a source of B-roll illustration (the hyper-cutty pace means numbers are rarely shown from beginning to end), and so the failure of Perry's marriage to Russell Brand gives Part of Me its only semblance of a narrative arc. Brand is a peripheral figure in the film and, the movie insists, in his then-wife's life. Much is made of Perry's insistence on using her few days off to jet around the world to visit Brand, rather than rest. Notable for a movie about a woman who makes a living selling a drag exaggeration of female sexuality stripped of actual sex for consumption by children, the film's most potent statements on gender come in the section describing how the show almost did not go on, like, once or twice, because Perry was so worn out from "trying to keep my marriage alive."

An early shot of a pre-celebrity Perry posing with Judy Garland's star on the Hollywood Walk of Fame turns out to be Chekhovian: Part of Me later takes a cue from Garland's great A Star Is Born, depicting Perry's ability to snap out of a marriage-sparked crying jag when it's time to go onstage to sing "The One That Got Away" (the song title itself an echo of Garland's Star ballad "The Man That Got Away"). Like Garland's character, Perry's character (and it is a character) turns personal loss into professional power, sacrificing herself to the crowd to be resurrected by their devotion.

This blatantly patched-together strain suggests that Part of Me's commercial purpose is, in part, to assimilate the tabloid narrative about Perry's offscreen life, which she presumably doesn't fully control, into the onscreen narrative of her onstage life, over which her control is total. But her savvy for self-presentation, though admirable from a business standpoint, makes for a more boring movie. You never get the sense that the camera was ever allowed to see anything that Perry didn't want it to see.

Or hear. The film is threaded through with hagiographic assessments from Perry's hangers-on regarding her talent, her cultural importance, and most laughably, her authenticity. In insisting that Perry is, as one member of the team puts it, "like a real girl" — a simile that has a range of connotations, from Pinocchio to porn — they're willfully misrepresenting Perry's appeal. We're talking about a pop star who invented a headgear-rocking-nerd alter-ego for the video for "Last Friday Night," a song about binge drinking and threesomes; she has to know she's selling a blown-out fantasy of party-girl invincibility to an audience too young to recognize the gulf between a living cartoon singing ingeniously insipid lyrics and an actual adult woman's reality. "Thank you so much for believing in my weirdness!" Perry tells one crowd. It's maybe the most honest moment in the movie — an acknowledgement that Katy Perry's brand depends on a suspension of disbelief.