Adam Sandler's Laziness: Why Nothing Changes in Movie After Movie 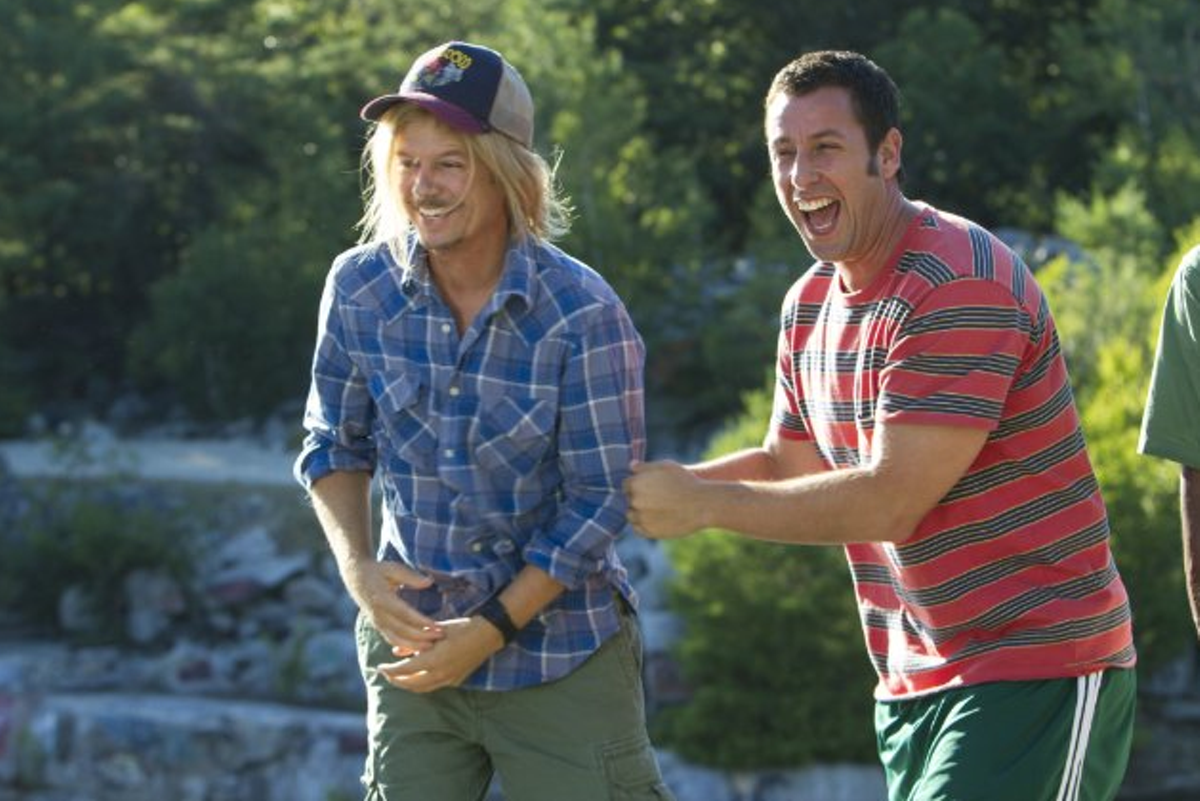 Not lazy in the sense that he has no ambition, or doesn’t want to work hard to maintain his status as America’s big-screen comedy king. But in the sense that Sandler has built an empire by doing the same things with the same people, over and over again.

That sameness, which extends to his generally juvenile, fratty sense of humor, may be the biggest knock against the star, whose latest offering, this week’s Grown Ups 2, is a derivative sequel to the worst comedy (if not film) of 2010. The original Grown Ups was a plotless mess that came across as something like a home movie of Sandler and his buddies hanging out at a lakeside cabin ogling hot women. It was the ne plus ultra of cinematic lack of effort—and also a $162 million-grossing domestic hit that’s now spawned Sandler’s first-ever sequel, made at least in part because his last two films, Jack and Jill (Sandler plays his twin sister!) and That’s My Boy (Sandler plays a ’80s-loving douchebag dad!), tanked at the box office.

The Grown Ups films are the culmination of the former SNL standout’s 20-year movie career, in that they utilize a stock formula and a recurring cast to deliver exactly what his audience wants—and absolutely no more, except perhaps some more-obvious-than-usual product placement. A skeptic might chalk up such unoriginality to a simple dearth of talent, and, yes, there are many fiascos in the Sandler canon, including the Sandler-as-Satan’s-son dud Little Nicky, the Sandler-with-a-magic-remote misfire Click, or the Sandler-with-an-amnesiac-girlfriend horrorshow 50 First Dates. Yet his obvious, enduring appeal to a large swath of moviegoers suggests that there’s something cannier at play here—even if what that is turns out to be a depressingly cynical understanding of his fans’ tastes and demands.

In short, Sandler may have limited range, but he recognizes that same limit in his audience. Perhaps that’s why his work has grown so little since Billy Madison and Happy Gilmore. Those two early, cult triumphs became texts for movie-quoting college kids (myself included) who took to Sandler’s love of asinine absurdity, jibber-jabber voices, and man-child idiocy, all of it punctuated by bursts of uncontrollable rage.

Those features are grafted onto standard-issue tales of underdogs making good that are usually embellished with random where-are-they-now cameos from the likes of Billy Idol and Lawrence Taylor. Such a template is the opposite of adventurous, and that’s precisely the point. Like his characters, his films rebel against maturing, because the fantasy of being perpetually young and stupid at heart is what Sandler seems to think most appeals to his fans—especially male ones. They continue to adore Sandler because, even as he’s gotten older and his films have focused more heavily on family-oriented issues and scenarios—the sappier Click, the family-friendly Bedtime Stories—his characters remain juvenile pranksters more interested in acting the fool than fully embracing adulthood.

Sitting atop a multimillion-dollar empire built on playing a variation of the same doofus, Sandler recognizes that fundamental change is bad for business. Thus, he only allows minor alterations to his bedrock cinematic formula, primarily involving a switch in setting—the ’80s for The Wedding Singer, Louisiana football for The Waterboy, prison football for The Longest Yard —and a minor shift toward additional gooeyness (50 First Dates) or ridiculousness (You Don’t Mess with the Zohan).

The quality of his supporting players has improved, and his leading ladies have become more out-of-his-league beautiful (love interests have been played by Drew Barrymore, Keri Russell, Kate Beckinsale, Salma Hayek, and Brooklyn Decker). Still, audiences expect at least an appearance from Rob Schneider, David Spade, Chris Rock, Kevin James, Nick Swardson, Kevin Nealon,or Robert Smigel, not to mention participation from Sandler’s old friends Allen Covert, Peter Dante, and Jonathan Loughran, who round out peripheral parts in just about every one of his films—and whom Sandler keeps working by funding their personal projects via his Happy Madison production company. The track record: Zookeeper, Deuce Bigalow: Male Gigolo, Grandma’s Boy).

Of course, Sandler has often expressed his belief in the value of loyalty, so doing his friends a solid seems entirely within his character. It’s also certainly more fun to make movies with your pals than with strangers. But Sandler’s nepotism is also driven by the fact that it’s an easy way to ensure consistency. That’s also why he works with a select few directors (Dennis Dugan, Peter Segal) time and again—even junky aesthetics are part of a Sandler brand founded on familiarity and predictability. Hence Grown Ups 2, the epitome of such a creative approach in that it aims to deliver the identical guys-you-like-joking-around-on-vacation vibe that proved so popular for its predecessor.

Sandler’s retreat to the safest ground after consecutive financial duds suggests that maybe his career strategy isn’t foolproof. While his sporadic attempts to branch out in films by name-above-the-title directors (Punch Drunk Love, Spanglish, Funny People) were, relative to his hits, underperformers, those were outside his—and his audience’s—comfort zone. Jack and Jill and That’s My Boy, on the other hand, were not, even if the latter did push his raunchiness into riskier R-rated territory. As a result, Grown Ups 2 arrives carrying a pungent scent of something rarely attached to a Sandler project: desperation. And its success or failure will likely determine whether the actor, for so long able to satisfy fans with the same old thing, will be able to continue lazily laughing all the way to the bank.

Jump to comments
« Pirates of the Old West: The Lone Ranger is more Disney overkill   |   Grown Ups 2 Has No Real Plot to Speak of »