Sameem is a dream fulfilled -- for the owner and for us 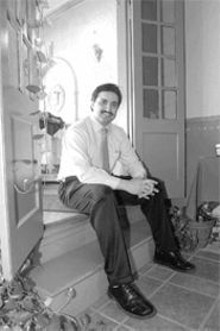 It took Qayum Mohammad fourteen years to open Sameem, his new Afghan restaurant. That's if you're counting back to when he first arrived on U.S. soil in 1991, after a three-year waylay in Pakistan from his native Afghanistan. That's counting the time it took him to learn English (he spoke not a word of it), secure a job at the Old Warson Country Club in Ladue polishing shoes and scraping mud out of members' cleats, and work his way through the club's food-service ranks as a busboy, runner, waiter, captain and, finally, supervisor.

After all that came the easy part. The idea of opening his own restaurant was put into Mohammad's head by his country-club co-workers, who loved getting a taste when he'd bring in his wife's Afghan cooking to eat during Ramadan. Aware that it was more cost-effective to buy an existing restaurant space than to construct a new one -- he'd been considering the St. Peters area, where he lives -- he answered a newspaper ad for what had been the Gulf Coast Café on South Grand (the original location of Pho Grand) and negotiated a price. He hired his wife as his cook, brought in his brother as a co-owner, recruited his aunt to do prep work in the kitchen and his uncle to help out. He opened Sameem (the name is Afghan for "friendly") in September with no advertising, attracted 50 customers on his first night and turned a profit in his first month.

Of course, now that he's open for business, there's more hard work to be done. A lot of this Mohammad brings on himself: He's the restaurant's sole server, donning shirtsleeves and tie every day to interact with the customers, put a friendly, chatty face on his establishment and help navigate a cuisine that's new to many. He also seems to be the only voice that answers the phone at Sameem. And somehow he manages to do all this and keep his job at Old Warson.

Often he'll wind up discussing Indian culture with clientele as a familiar point of entry. (Once I overheard him declare jovially, "I love Indian music, but the movies are the most exaggerated thing I've ever seen.") Sometimes there's a lot of anxiety to coax out, as was the case when a businessman on a lunch break asked for an iced tea and then inquired nervously, "It's, like, normal iced tea, right? Nothing weird in it?"

There is a weirdness component to Afghan cooking, but that's mostly on paper -- in the names of certain spices like ghoura angoor, a powder derived from sour grapes that Mohammad gets by way of California; and in dishes like muntoo, which is sort of reminiscent of ravioli, stuffed with ground beef and white onion, garnished with dried mint. On the plate, the food at Sameem bears a warm, inviting personality, much like Mohammad himself.

Assuming you generally know your way around East Asian cuisines, the recognizable stuff here includes samosas (spelled sambosas) with thin, flaky, wafer-crisp edges and soft, cushy bellies of potato and piquant scallions; marinated and char-grilled kebabs of beef, chicken or lamb; and pleasing pakoras (which are like vegetable fritters) made with more potato and scallions, plus mushroom, onion and tomato. Bolari is a traditional bread, employing more potatoes and scallions sandwiched between sheets of pliant, paper-thin dough and sautéed; it's a bit greasy for finger food, but moist and flavorful. The only item on the menu that's weird in a bad way, I think, is the eggplant burani, an appetizer that somehow comes off like cold grape leaves propping up slices of mushy, orange-hued eggplant.

Pakistani or Indian biryani translates here to beriani. It's a special-occasion, time-consuming dish based on a bed of basmati rice, spindly and aromatic, cooked with a boatload of vegetables and seasonings (tomato, onion, garlic, ginger, turmeric, cumin, cardamom, cinnamon, mint, black pepper) and served under chicken, shrimp or lamb, with chutney on the side. The most noticeable difference between Afghan and Indian cooking is that the former doesn't rely much on curry to amp up the heat. As a result, there's little of that sweatbox reaction that can happen over the course of an Indian meal. This food stokes the palate without scorching it, like a cozy fire.

Mohammad says that if you go to someone's house in Afghanistan and they really, really want to impress you, they'll serve muntoo. It takes some high-tech kitchen wizardry, and patience, to pull off: First you make a pasta dough and run it through a pasta machine. Then you cut it into rounds, preferably using the lid of a silver teapot as a stencil (per Mohammad). Then you brown ground beef and season it with dried mint and some other stuff and wrap it up in the dough like tortelloni or ravioli. Then you steam 'em in a tiered steamer called a daig, a common Afghan appliance designed exclusively for cooking muntoo. Steaming, as opposed to boiling, renders the pasta less soggy and imparts a unique texture. Muntoo is plated on a bed of daal nachod (a mix of spinach, carrots and lentils) and topped with a garlic-infused yogurt sauce. Mohammad and his wife have added only one non-Afghan touch: a sprinkling of grated Parmesan cheese on top. Delicious.

Muntoo is listed on the menu under "Traditional Afghan Entrée Selections" and not under "Pasta and Casual Fare." The latter includes a seafood pasta, a vegetarian pasta (both with a choice of angel hair or penne) and a spicy chicken penne tossed with mushrooms and spinach. These derive from Mohammad's personal passion for the stuff. At Old Warson, he says, he used to watch the line cooks churning out pasta and became fascinated with the process. Sameem's pastas come from Mohammad's own tweaked recipes, which employ Afghan spices and less dairy than a typical Italian cream sauce (also, no white wine), rendering a sauce that's more accurately described as a coating. Apparently Mohammad has learned Italian cooking as well as he has the English language. He turns out pastas perfectly cooked and tossed with just-right amounts of complementary ingredients.

Mohammad's one-man performance at Sameem owes partly to the absence of his brother, who is in Afghanistan searching for traditional pieces to bring back and add to the restaurant's décor. For now the two-room space makes do with the swordfish mosaic, trickling fountain and other nautical elements Gulf Coast left behind. Upon his return, Mohammad's brother will take on some front-of-the-house duties and also go back to his own day job at Edward Jones. Till then, at least he knows the hard work is paying off, and Sameem is living up to its friendly name.