Alibi Cookies and the Genius of a Warm-Cookie Vending Machine 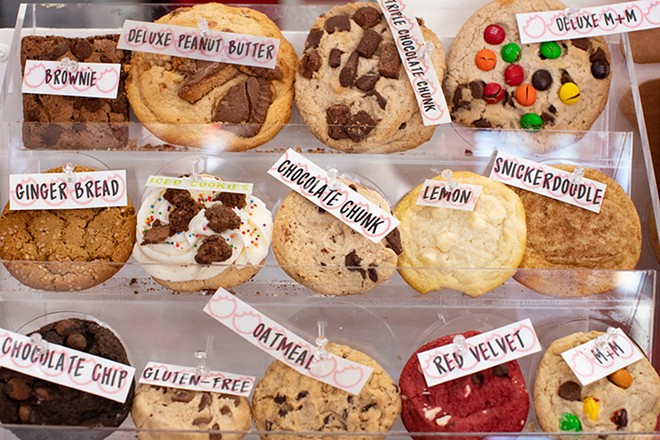 
Like a lot of people during the first weeks of the pandemic, Mike Evans found himself stuck in his home with nothing to do but eat, drink and doom-scroll through social media. Out of work from his jobs DJing, running a party bus and working in restaurants, Evans spent just about every day grilling a rack of ribs, drinking a twelve-pack of beer and a lot of Jameson, and wondering how he was going to keep his lights on. To keep his mind occupied, he went so far down the Facebook rabbit hole he jokes that he thinks he reached its end.

However, rather than finding the flesh-eating demon we all know lurks in those depths, Evans discovered his saving grace: an article about vending machines in Japan. Struck by the impressive array of vending-machine fare available on the other side of the world, Evans was intrigued. Why didn't the United States have such a robust vending-machine culture, one that stretched beyond stale trail-mix packets, chips and candy bars? From what he saw, the wide array of machines made it possible to offer just about anything out of them — even his favorite treat, warm cookies.

Evans immediately began doing some research and was shocked by what he'd found: No one had yet invented a warm-cookie vending machine. To him, it seemed like such a no-brainer; having spent a majority of his working life surrounded by people eating, drinking and being merry, a convenient, novel way to get a warm and tasty sweet treat would surely be a runaway hit. Once he saw that such a thing didn't exist, he started experimenting at his house by pulling apart a mini fridge and putting a heater in it. Convinced by his prototype that it could actually work, he contacted a vending-machine manufacturer in Japan and spent the next six months going back and forth with different design ideas. After a lot of work, laughable Google translate exchanges, and trial and error, Evans plugged in his first warm-cookie vending machine, dubbed Cookie Bot, on September 4, 2020. 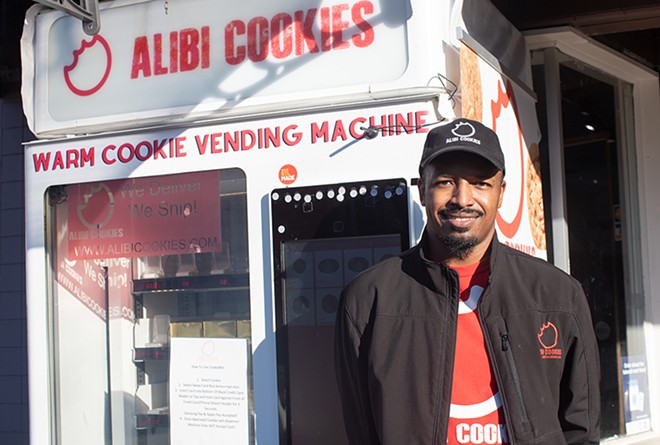 
Even before Cookie Bot made its way across the Pacific, Evans knew there had to be much more to his business than the machine. A self-described "cookie monster," he has loved every kind of cookie for as long as he can remember and knew that, if he was going to fill a robotic machine with baked goods, they would have to be delicious. Determined to be a cookie company first and a novelty second, he founded Alibi Cookies and got to work perfecting his recipe. Once he was satisfied he had it just right, he launched Alibi's website for online sales. Cookie Bot came online just a few weeks later.

Rather than reinventing the cookie wheel (outside of his unique way of delivering them), Evans relied on tried-and-true recipes of classic varieties to fill Alibi's shelves and Cookie Bot's tummy. However, he did have to navigate a lot of trial and error in playing around with the right combination of ingredients that would ensure the cookies remained moist and the perfect texture for an entire day, even under the constant warmth of the machine. Though he laughs about being a horrible baker growing up, one taste of Alibi's cookies proves he's found the magic formula.

Getting past that novelty was a feat, considering how fun the experience of using Cookie Bot is. The machine, a large white box with red letters, is slightly wider and taller than a soda vending machine and has a clear glass front. Gold boxes with the Alibi label on them contain three individually wrapped cookies, either of the same variety or a mixed "surprise" pack. A touchscreen panel on the right side of the bot has pictures of the day's wares. Customers insert their payment into the credit-card slot, make their selection on the screen and watch as a slender robotic arm rises to their desired choice, picks up the box and delivers it to a small square window that opens to reveal the treat. The entire process lasts no more than ten seconds.

What strikes you when you grab the box from the machine is that it is indeed warm. This should go without saying; after all, a warm-cookie delivery system was Evans' reason for founding Alibi in the first place. However, the experience of handling something that feels so fresh from a machine just feels so different from a typical U.S. vending-machine experience. That incredulity continues when you take your first bite. A peanut-butter-chip version, for instance, has the warmth and texture of a cookie that has just come from the oven. The edges are crispy, the interior soft, and the chips still in that perfect state that resides halfway between solid and molten. Even absent the intriguing machine, it's an excellent cookie that balances its sweetness with the peanut butter's saltiness. 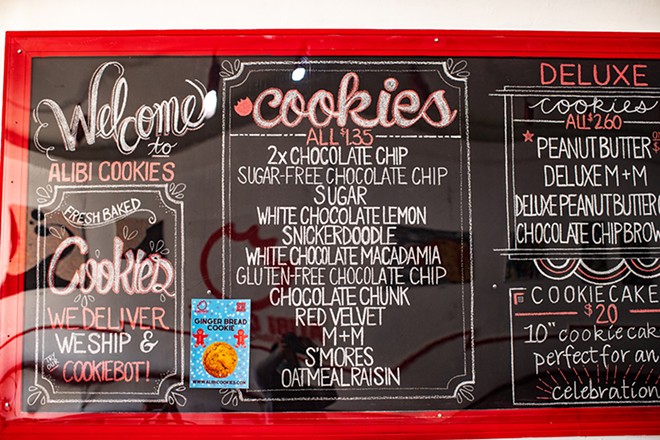 
Like the peanut-butter version, Evans brings a delicious take on the classic chocolate-chunk cookie. Here, too, the cookie maintains that perfect balance of softness and crunch, delivering a stunning melty hunk of milk chocolate in every bite. If this is not enough for chocolate lovers, Evans offers a double-chocolate cookie, which encases those large chocolate hunks in rich, bittersweet dark-chocolate dough. It's positively decadent.

Alibi's ginger snap is striking in how much it tastes like actual ginger. You can feel the pleasant stickiness of the root in little bits throughout the crunchy cookie; its spice is equally apparent. Similarly, the oatmeal raisin has a generous amount of cinnamon warmth in every bite, balancing out the dried grapes' sweetness. Equally impressive is the white-chocolate-macadamia cookie, which is crunchier than other versions, therefore allowing it to stand up to the macadamia nuts scattered throughout. Toasty, sweet and buttery, Alibi's version is perfection of the form.

A s'more cookie is delivered with marshmallows as gooey as if they had just been pulled from a campfire. Snickerdoodles are delightfully restrained in their sweetness, and a lemon-white-chocolate-chip cookie is so spectacular Evans could stock Cookie Bot with this treat only and still be a roaring success. The flavor evokes the sweetness of a Meyer lemon, but it's balanced with buttery and vanilla-tasting white-chocolate chips so beautifully you understand why Evans nearly had a riot on his hands when he ran out of them briefly. 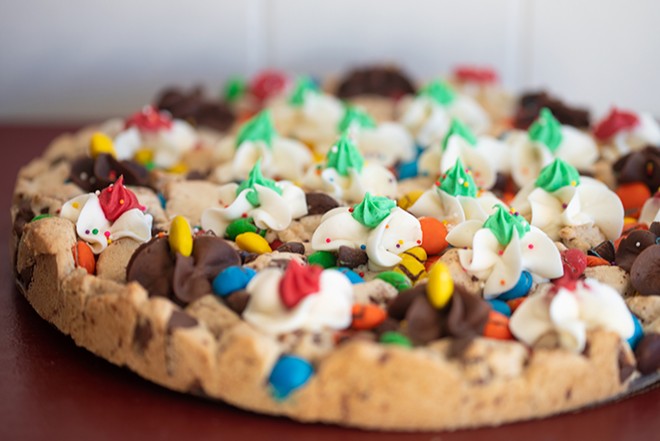 
All of these versions are available, at some time or another, from Cookie Bot, though Evans offers a few treats only at his storefront. Iced cookies, covered in either chocolate or vanilla frosting, are like individual cookie cakes sprinkled with everything from brownie bits to chocolate chunks. He also reserves his deluxe cookies for in-store purchase only, including the deluxe peanut butter, which will send chocolate and peanut-butter lovers over the moon. Here, chunks of chocolate-peanut-butter cups are scattered throughout a thick, decadent peanut-butter dough, making it almost like a round brownie rather than a mere cookie. Evans even serves cookie shakes, each inspired by a different Dogtown institution, including the gansito-cake- (think Mexican Twinkie), sprinkles- and chocolate-syrup-laden Sunny's Cantina. The shake was concocted to celebrate the restaurant's twentieth anniversary; there couldn't have been a more indulgent homage. Evans currently has two Cookie Bots, with associated stores, in Dogtown and Jefferson City. Another will soon open in St. Charles. For now, his model is to have a storefront near each machine (currently, the machines are directly outside the stores), though he suspects the Cookie Bot phenomenon will take off enough that they will be able to exist on their own. Judging from the number of people that queue up every night of the week between 2 and 4 a.m. to enjoy Alibi's warm, comforting treats — and his knack for producing delicious cookies that go beyond the machine's novelty — the sky is the limit.