PlayStation 3 has potential -- but for the moment, little else. 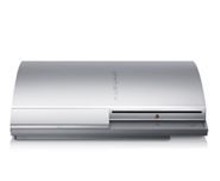 I did not have to fend off a horde of bloodthirsty geeks for my PS3. And nobody shot me either, as one hapless Connecticut gamer was.

Actually, I just preordered my console weeks ago, and on the day it came out, I walked into the store, paid for it, and walked out. It took 10 minutes. Nothing Mad Max about it. Sorry.

Ironically, the experience of owning a PlayStation 3 is similarly ho-hum. Certainly, there is greatness to come, but for now the console doesn't quite live up to the hype (or the hysteria).

It's certainly a striking piece of technology. Set vertically, it's like a scale model of the monolith from 2001: A Space Odyssey.

Enjoy the spectacle while it lasts: The glossy black finish attracts every stray hair and dust mote within a five-mile radius; in 15 minutes, the PS3 looks like you exhumed it from a hole in the backyard.

Hooking it up poses a whole set of challenges. The box includes only standard A/V cables, which is odd for a console marketed as "high-def." You'll have to run to Circuit City for a component or HDMI cable to get the full effect.

Luckily, Sony was nice enough to include a controller -- the hastily named "Sixaxis." While it looks similar to the PS2's Dual Shock, it's a hodgepodge of ideas cribbed from the Xbox and Wii. Fewer guts -- i.e., no rumble feature -- make the Sixaxis weigh less than its forebear, but it almost feels too light, even cheap.

Although the Sixaxis is wireless, users are forced to occasionally connect it to the PS3 via a USB cable. It's an irritating and inexcusable quirk, since no other console's wireless controllers require this bizarre process.

Firing up the PS3 brings a similar lack of excitement. The interface is familiar to anyone who's played with Sony's PSP: a horizontal row of icons devoted to games, videos, music, and so on. The best description is "workmanlike," which isn't exactly how you'd hope to describe your $600 next-gen machine.

One area in which the PS3 doesn't disappoint is as a Blu-ray player. The console is surprisingly quiet, and the clarity of the images is outstanding -- assuming you have cables and an HDTV. The first PS3s come with a Blu-ray copy of Talladega Nights, but it's a terrible example of the technology; spring for Mission: Impossible III or Corpse Bride if you want to dazzle your friends.

Launch software is PS3's problem. The selection is remarkably mediocre. Almost all the good games are already on the Xbox 360 -- and in many cases, the 360 versions run a bit better.

The PS3's lone great exclusive is Resistance: Fall of Man, a WW2-era sci-fi shooter, but even it doesn't measure up to the best-looking games on the 360. While visually well-designed, the renderings feel flat and lifeless.

And the jury is still out on the Sixaxis' motion controls -- few launch games use this feature in any meaningful way.

Overall, the launch of the PS3 is something of a letdown. There's nothing here worth paying $500-$600 for this holiday season -- let alone engaging in bloodsport at Best Buy or mortgaging your house to buy on eBay.

That's not to say things won't change -- Metal Gears and Final Fantasies are on the way. But so are price drops, and patient gamers would be better off waiting for both.

Jump to comments
« A Masterpiece on Canvas   |   Our top DVD picks for the week of December 7. »