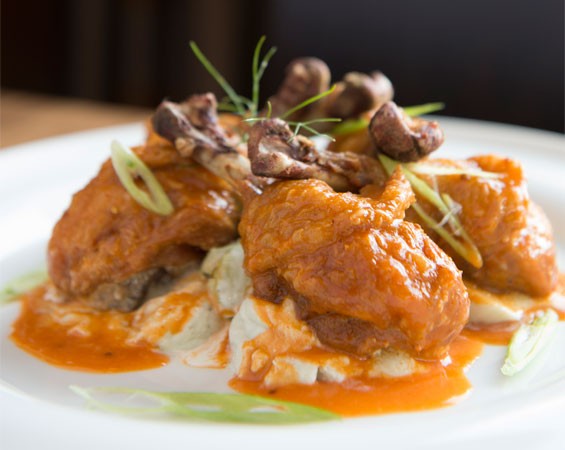 Eric Brenner promised he'd be back. He grew up in St. Louis, began his culinary career in restaurant kitchens on the Hill and earned a degree from the culinary program at St. Louis Community College — Forest Park. His Central West End restaurant Moxy Bistro was a local favorite when it opened in 2004 and remained so until it shut its doors in 2010. Then the local kid decamped to New York City to work as chief culinary officer for BOLD Organics, maker of a gluten- and dairy-free pizza line.

Still, he promised a return to his hometown, and early this year he kept it, announcing his presence on Twitter via a call to arms for staff.

Located on the ground floor of the Park Pacific Building at 13th and Pine streets, Alumni Saint Louis is named in homage to the infamous question St. Louisans ask one another. It's not just the name, though. The local spirit runs all through Alumni, beginning with the most striking visual feature of the space: Tall windows encase the dining room, providing views of the Central Library, sculptor R.P. Daus' Firemen's Memorial, the Soldiers Memorial Military Museum and city hall. A potpourri of historical photos acquired via the library runs along the wall just shy of the ceiling, featuring famous local luminaries, places and watershed events. Each table is equipped with a deck of St. Louis trivia cards. Gateway City specialties dominate the menu, from toasted ravioli to crab rangoon to St. Louis-style ribs to gooey butter cake. Brenner fans from his Moxy days will be happy to reacquaint themselves with the chef's beloved tomato bisque and flourless chocolate cake.

Brenner's interpretation of crab rangoon is a playful one, transforming the filling into a dipping sauce, with the fried wonton skin deployed as chips. The guacamole that topped the dip was extraneous, but it didn't detract from an enjoyable appetizer. Toasted ravioli were tasty too — perfect for a first timer's foray into St. Louis "cuisine."

Too-dry roasted chicken was the weak link in a turducken sandwich, which also featured duck confit, turkey bacon and onion jam, served on an onion roll. The "Smokehouse" burger hit the spot, however, featuring two four-ounce patties à la Steak 'n Shake summited by a winning combo of pulled pork, caramelized onion, cheddar cheese, fried pickles and a tangy-sweet barbecue sauce — all between halves of a sturdy pretzel bun that held everything together admirably. Zucchini fries, served on the side with a marinara sauce for dipping, were delicious enough to make us consider abandoning french fries for good. Another popular option: fish tacos with maple syrup/chipotle-glazed salmon, served on flour or corn tortillas with cabbage slaw, avocado and corn salsa.

St. Louis wouldn't be St. Louis without Italian influences, and Brenner's menu reflects that, devoting an entire section to pastas. South city's wedding staple, baked mostaccioli with Provel and meatballs, and linguini pescatore with clams and shrimp, set the pace for the group, but a duck stroganoff led the pack, boasting earthy wild mushrooms and bright, crisp asparagus, in a rich sherry sauce draped over silky tagliatelle. Entrées include a strip steak with horseradish mashed potatoes; fish and chips; and a roasted half chicken with mushroom polenta and Brussels sprouts. St. Louis-style ribs were missing the advertised (and requisite) woodsiness that should have been imparted by a long, smoldering sojourn. Instead, the dry rub and sauce lazily sat upon the slab, and the meat clung far too stubbornly to the bone.

Caesar salads are standard fare at restaurants. What drew us into Alumni's was the substitution of fried calamari for croutons in the salad. Unfortunately, owing to a miscommunication between our server and the kitchen, our croutons arrived cool. Too bad — the hot-and-cool combo undoubtedly would've enhanced the Caesar experience. If you grew up in St. Louis and order the classic "Hill"-style salad of mixed greens, red onions, pimientos and Parmesan cheese, you'll find that it tastes exactly how you remember it, and if you grew up in St. Louis, you'll mean that in a good way. Same goes for the Provel-and-pepperoni pizza, cracker-thin crust and all.

Highlighting the dessert menu is the gooey butter cake, topped with a blueberry compote to ratchet down the cake's sugar-sweetness and a lemon cream-filled tuile that looks like cannoli. I also enjoyed the "7UP Tart," named for the soft drink with local roots. This was a portioned-for-one treat, made with a saltine-and-butter crust filled with a lemon-lime custard and topped with lemon cream and shaved lemon and lime zest: a St. Louis-inspired treat by way of Key West.

Local breweries — Schlafly, Urban Chestnut, Six Row and 4 Hands — make appearances on Alumni's draft beer list, though save for Schlafly's pale ale, they're absent from the Anheuser-Busch InBev-dominated bottle roster. Wines by the glass range in price from $7 to $11; the by-the-bottle list features known names such as Sinskey and Palazzo. The cocktails, a.k.a. "Spirits of St. Louis," further the local theme — a Templeton rye manhattan named for the late Stan Musial, f'rinstance.

Brenner has stoked Alumni's menu with a plethora of gluten-free options, no doubt inspired by his work at BOLD but also perpetuating a trend he started at Moxy.

"I think that particular segment of the community is underserved," he says. "If you have a food allergy and you go into a restaurant, you don't necessarily feel comfortable knowing that everything is being done in the back of the house to your specifications. We have an actual separate part of the kitchen that we do all our gluten-free work in. We have a gluten-free fryer. We bake all of our stuff in a completely separate oven."

Over the course of three visits, service was friendly but uneven. Our party was warmly greeted when we arrived for our dinner reservation, and the waitstaff was on the ball, informing diners about specials, describing dishes and offering suggestions — except at our table. We wouldn't have known there were specials had I not already eaten a midweek lunch at Alumni and overheard my server reciting them at another table.

With some tweaks and a little more time for the kitchen and waitstaff to work out the kinks, Alumni Saint Louis has the potential to be a downtown-dining staple. The omnipresent Brenner clearly has his hands in all aspects of the business. I saw him at work in the kitchen, greeting tables in the dining room, conducting business meetings in the bar and even giving tours of the restaurant's private dining rooms. Clearly, the local boy intends to do whatever it takes to make his town proud.