Andre Cataldo Is a Control Freak by Design 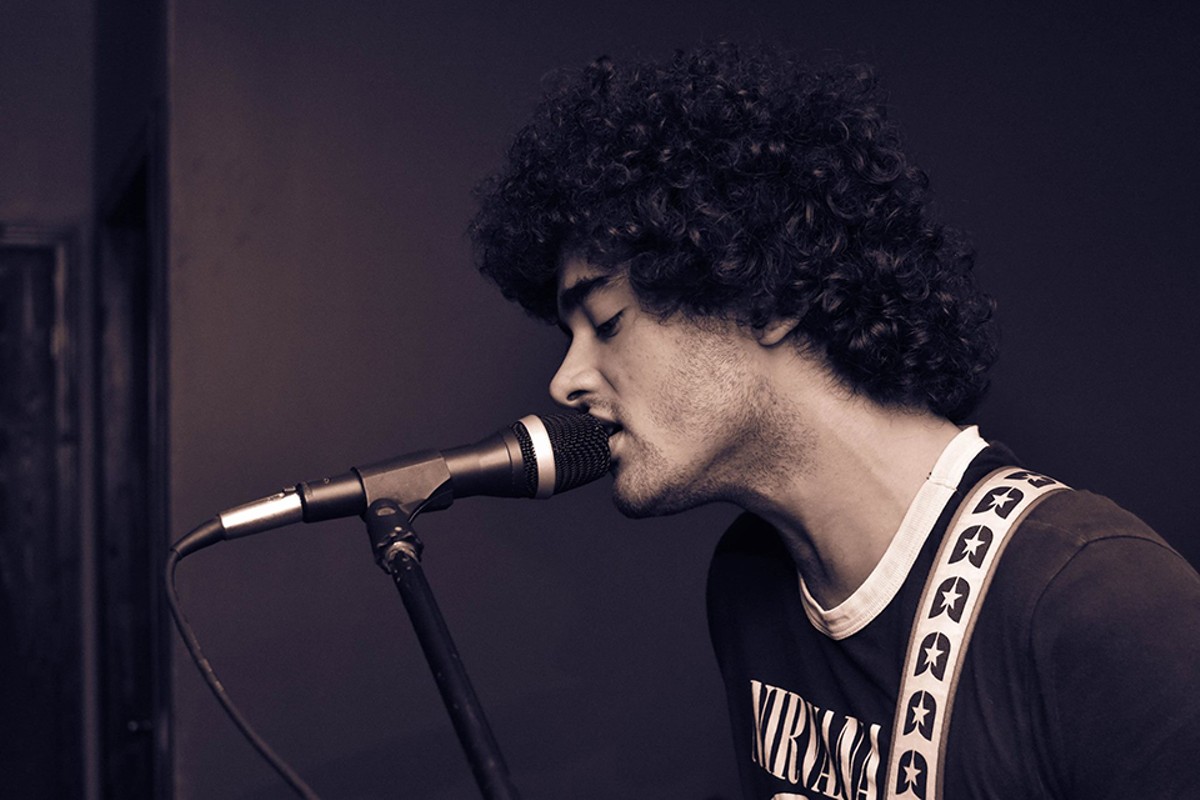 Though he typically performs with a live band, Cataldo's records as Dear Genre are all him.

On a sunny Monday afternoon in early April, André Cataldo is working his way through a foamy cup of chai tea at Hartford Coffee in the Tower Grove South neighborhood. Chai tends to be quite a bit lower in caffeine than a standard cup of coffee, and that's probably OK for Cataldo, who already carries a bit of manic energy with him. Given that in 24 hours' time his band Dear Genre will open for Ron Gallo at the Ready Room, his energy has been transmuted into a healthy dose of nerves.

"For a thing like this, it's always a little bit intimidating — just a bit — because you're coming into a setting with higher expectations than a local bill," Cataldo says of the gig. "So this is a very cool opportunity and a scary opportunity at the same time. When I get nervous or scared or anxious that we may be needing to give ourselves a little push, we try to do it with energy."

Dear Genre plays what can broadly but comfortably be called indie rock, with songs that can range from nervy to laconic, but with a steady grip on an errant (but still melodic) tunefulness. But as he plans for the Gallo opening set, Cataldo's hope is to keep the audience's pulse rate high.

"At higher-caliber shows, where we're dressed to impress, I try to keep the tempo above 90 bpm," he says.

Cataldo looks like an amalgam of any three members of the Strokes circa 2002 — wiry and compact, like a spring ready to pop, with a halo of tight, dark curly hair. His arms are laced with tattoos — a Fender Telecaster, the solar system and an outline of his native country of Brazil (Cataldo was adopted as an infant and raised in west St. Louis County). He has been the driving force behind Dear Genre for eight years — its sole songwriter, only constant member and, across five studio albums, a one-man band who handles all instrumentation himself.

"It's 100 percent me," Cataldo says of the sounds on the band's forthcoming record, Henna Party, due in May. "I think I've recorded with other musicians on one record, and I didn't like that much. I don't really play nice.

"If you look at artists in general, they're all kind of peculiar and do things a specific way, and if it's not quite right it's totally wrong. I think I've had to learn to be particular to get what I want in the final product," he continues.

If he's fussy, it's only to a point. Cataldo doesn't tend to overthink his process or, especially, his product — the name Henna Party comes from a song title on the new album and has no special significance beyond that, he says. So he looked for outside help in sequencing the album to walk the line between coherence and variety.

"I wish I could articulate better how I come to that," Cataldo says of the album's magpie tendencies and the difficulty in settling on a track order. "I had a good buddy of mine named Andrew Ryan — he helped me organize this one. I sent it to him and trusted him with it, and he was like, 'What would you think about doing it like this? It would make sense sonically and scientifically.'"

Even in the recording process, Cataldo prefers to keep a bit of chaos in the air. By embracing a "first take/best take" mentality, he imparts breezy confidence on the tracks.

"I actually don't go back and re-record vocals, which is a really terrible practice, but I think there's something raw and sincere about the way it comes out the first time ever," he says. "There's a certain sound — you can tell you're still exploring the song and learning intricacies of it and are not quite sure how it sounds. I kind of like the way the insecurity projects itself into the song. It's kind of delicate, a little bit; it can fall apart at any moment."

A day after the Ron Gallo show, Cataldo emails to give an update. He performed with his live current lineup, and things went well. "The new live members are just getting to the point now where they're feeling comfortable enough to really starting adding bits and pieces of their personalities into the songs that we're playing," Cataldo writes.

And though Dear Genre lives and dies on its headmaster's whims, it remains important to Cataldo that his band exists both in the studio and on the stage.

"One of my favorite parts of this band is hearing how the songs shift and vary as a result of the revolving door of members coming in and out," he writes. "I think most people see that and assume that means I'm just a big-headed ass that's hard to work with, but I'm certain that an ever-changing cast is very much intentional."