As Excitement for City Foundry STL Grows, Its Food Hall Works to Find Its Footing 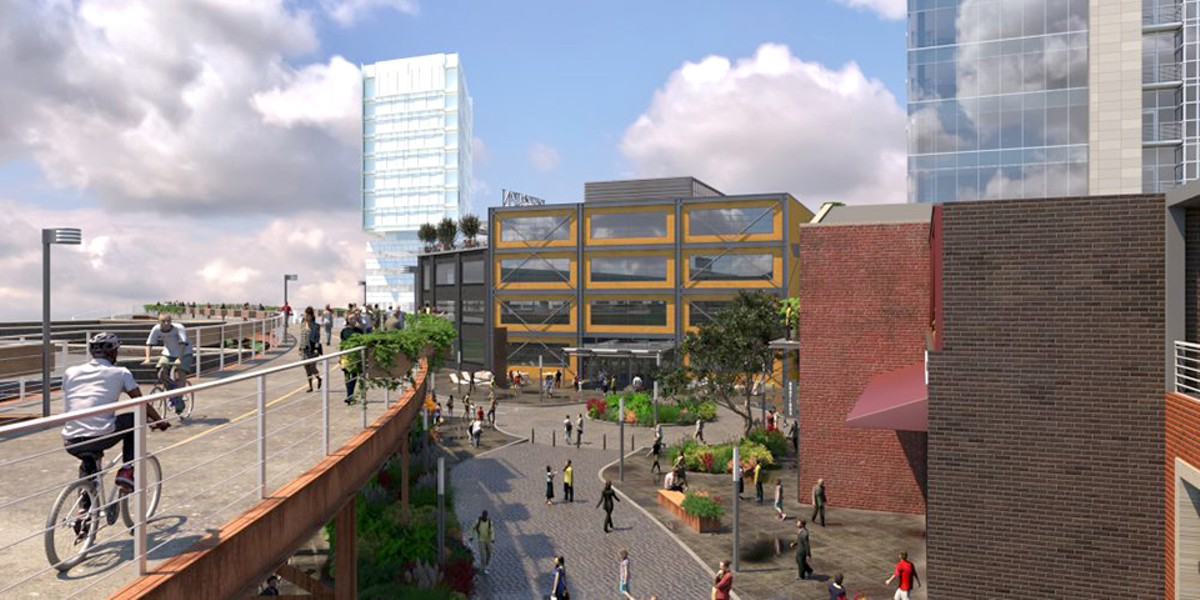 Driving on Highway 40 last month, St. Louis commuters watched as new signage was installed outside of City Foundry STL. The sleek, modern black-and-white sign cuts a memorable figure atop the broad, butterfly-style industrial roof that is rusted and tagged with fading graffiti. It signaled that the sweeping, shiny new development is inching toward opening, ushering in the next chapter for the 91-year-old brick building.

For more than 40 years, metal was melted down and cast into shapes for motors and generators under that roof. Originally built by Century Electric Foundry in 1929, the business changed hands over the years, until 2007, when the last motor cooled.

The once-bustling industrial space sat vacant for eight years, acting as a refuge for the homeless and recreation for urban explorers and graffiti artists. In 2015, it was purchased by an investment group led by Steve Smith, the owner and developer of the Foundry and CEO of The Lawrence Group, a St. Louis-based design, architecture, construction and development firm. A year later, Smith and his ownership group, FoPa Partners LLC, succeeded in having the property added to the National Register of Historic Places.

The property is now being redeveloped as City Foundry STL, a mixed-use retail complex, by FoPa and The Lawrence Group, which is providing design and development services. The Foundry is slated to open in phases beginning this summer and has generated quite a bit of buzz since it was first announced in 2016.

In five or more years, when the final phases are complete, the Foundry is expected to encompass 237,000 square feet of retail, dining and entertainment space and more than 107,000 square feet of office space. (Great Rivers Greenway, Orion Genomics, Gateway Blend, Bullhorn and iSee Innovation have already signed on as office tenants.)

The project plans to add multi-family residential units (apartments and/or condos), although initial plans for that stalled in 2017. (Originally, the Foundry was supposed to feature a 24-story apartment building, but the ownership group was unable to finance it in its first phase of construction due to historic tax credits the project received for redeveloping existing buildings on-site.)

The first stage is set to open in waves throughout 2020 and promises exciting new dining and retail attractions. The developers hope to open with a splash and then sustain that momentum by continuing to debut concepts until the full range of offerings is open.

TRENTON ALMGREN-DAVIS
The first phase of the Foundry will see the redevelopment of five original buildings on-site.

The current roster includes Fassler Hall out of Oklahoma, which will bring a three-story beer hall serving a wide selection of brews (including plenty of local options; the chain doesn't brew its own beer), and Austin, Texas-based Alamo Drafthouse Cinema, which will feature ten screens and a different kind of moviegoing experience. Denver-based Punch Bowl Social, meanwhile, will offer "an adult playground" serving up food, drinks and games such as bowling and giant Jenga.

In addition to these large anchor businesses, Fresh Thyme Farmers Market out of Downers Grove, Illinois, has signed on, adding a grocery store to the mix, as has local catering company Butler's Pantry, which is set to open an event space, 18 Rails, on-site. Additional restaurants and shops are expected to eventually join these concepts along the main drag, dubbed Foundry Way.

Sandwiched between the office tenants and dining and entertainment spots will be the City Foundry food hall, the "heart and soul" of the project, according to Smith.

Smith says the food hall was inspired by similar developments in other cities in the U.S. — in particular, he names mixed-use spaces such as Chelsea Market in New York and public markets such as Reading Terminal Market in Philadelphia.

"I've been fortunate enough to travel and see a lot of interesting things across the country — and frankly around the world — and as a St. Louisan, it was like, 'How can we do something cool like this in St. Louis?'" Smith says.

He makes for a convincing and passionate pitchman for the project. He doesn't shy away from making the kinds of shrewd observations you'd expect from a developer — a major greenway, which will run through the Foundry, is good for the environment but also for the development's free parking — and he doesn't sugarcoat the challenges the project has faced so far.

The 63-year-old speaks with an enviable amount of energy about how much the Foundry stands to benefit St. Louis. While you'd hardly expect him to say the opposite, you also sense a perfectionist's sincere desire to get all of this just right.

On weekends, when construction comes to a halt, Smith says he wanders the property to reinspect the spaces and take notes about how to improve or modify things. By the time all phases of the Foundry are complete, it will have consumed ten years or more of his life, and he's determined to make it a success.

In terms of revenue, the food hall is not where Smith expects the Foundry to make its money. He estimates it will account for only 5 percent of the development's total revenue. However, it's been key in marketing the project to the public and potential tenants for more than 100,000 square feet of office space.

Early press releases trumpeted local chefs set to debut exclusive new concepts at the food hall, and follow-ups boasted first of 50 percent occupancy and then 80 percent. The chefs may not have been expected to be the Foundry's economic engine, but they were going to make it local and specific to St. Louis — and cool.

"The food hall is the heart and soul of the Foundry, but financially it's a very small piece of it," Smith says. "We want our [food hall] partners to be really, really successful, because that will make the overall Foundry have a better brand and overall success."

As the opening of the food hall nears, though, a group of local chefs and restaurant owners have exited over what they say were surprise costs and unfulfilled promises. As of press time, six vendors confirmed they have dropped out of the project, including CropCircle, Mokyu Mokyu, Ukraft, Sumax, Lost & Found: A Burger and Pizza Joint, and Juice Box Central. At least five other previously confirmed vendors have exited in the past two years; phone calls and messages to those owners were not returned.

Like many of the former tenants, chef Michael Friedman, who planned to open two concepts at the food hall — Lost & Found: A Burger and Pizza Joint and Juice Box Central — says he entered the project with excitement and exited when the requirements to participate abruptly changed.

"My original lease with them was definitely a very good agreement for all parties included, but then as time went on and on, they kept changing the rules without any notice," Friedman says. "And then they wanted me to sign a new one, and I had to back away. It was a bad deal. I wish I didn't waste my time."