Now 56, Lehman has been growing things since she was five years old and, barring the six years she lived in New York City, she's always had a garden. Her father grew up on a farm in Oregon, and he still shares ownership of the land with his siblings.

"While he left home at a very young age, on a full scholarship to Stanford, he never lost the importance and connection to the soil," she says. "He passed this on to me. Planting and growing food was a family activity. We sowed seeds together. We watered together. We harvested together."

To prepare for her new role as a farmer, Lehman read everything she could get her hands on — from documents about gardens of lore, such as Native American, native Missouri, colonial and Biblical, to stories about modern-day chefs' gardens. She is constantly tearing photos from food magazines, researching food trends and being inspired to try something completely off the cuff. Each season progresses through trial and error as she learns what grows well in St. Louis and what chefs are looking for at a given moment in time.

Her path to the business has not been a straight line. Lehman worked primarily in the music industry in the early 1980s and 90s, both in San Francisco and New York. She managed finances for the American arms of three British record labels — Rough Trade, Factory Records and Blast First — and later managed tours and shot documentary photography for the Mekons (still one of the longest running British punk rock bands). From there she worked in finance for several nightclubs, continued in social documentary photography and competed for fifteen years in national and international Olympic-style weightlifting. That's where she met her husband, Derrick Crass, a weightlifting champion and two-time Olympian.

The pair moved to St. Louis in 2012 so Crass could study in Saint Louis University's physician assistant program. Lehman knew it was the opportunity she had been waiting for to try her hand at professional urban farming, "My goal has always been to be outside for as many hours a day as possible," she says. They intentionally purchased a home that included a backyard big enough for growing.

The property lot is 30 feet by 162 feet, quite sufficient for the crops Lehman grows, which now number more than 100. The potent flavor of herbs and seeds means that just little bit of a plant goes a long way. Even so, not a single square inch of growing space, horizontal or vertical, is wasted.

One of Lehman's more cherished crops is fennel. The fully developed fruit tastes like Good & Plenty candies, and a garnish of the flowers or a sprinkle of the pollen gives an anise fragrance to cold soups, grilled fish, vegetables or pork. Blood & Sand uses her fennel seeds in its summer herb cake; before closing last year, the James Beard Award-winning Niche used it as an ingredient in its spring onion and Yukon potato soup.

Summer Wright, executive pastry chef at Vicia, is a self-described fanatic for both varieties of fennel grown by Lehman, as well as her verbena and rose geranium. She values the unique offerings and also the care Lehman takes with everything, from the health of the soil to the hand-delivered, artfully curated bouquets of flowers and herbs tied with string. "She is extremely educated and I have yet to stump her with my questions. She pushes the envelope of comfortability quite gracefully to open our eyes to unusual but friendly botanicals, and we are better chefs for it," says Wright. 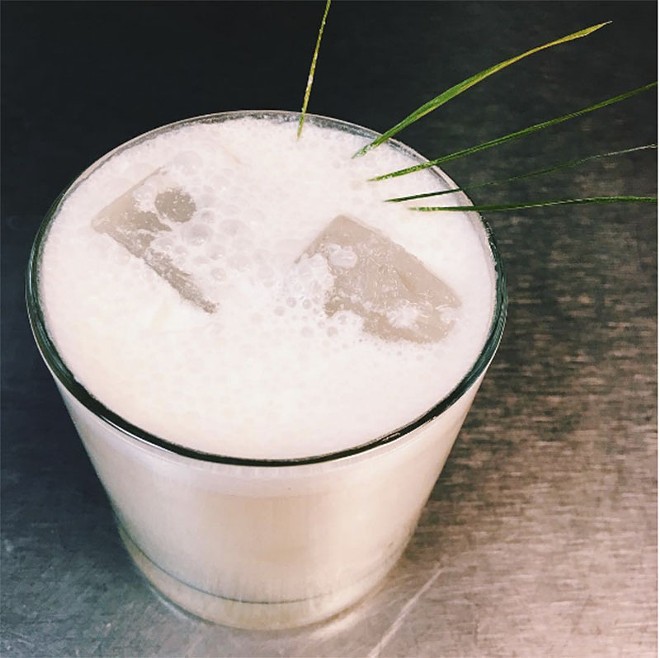 For Lehman, her first value-added success was with a line of bitters in collaboration with Fausz, then a bartender at the Royale (he now lives on the West Coast) on a very limited edition line.

Recalls Fausz, "she started making tinctures, and I asked her if she ever thought about combining them to create more complex flavors, and I think she turned that into a dare." They met weekly from October 2014 through October 2015 and created five flavors — Summer, Fall, Winter, Spring and one for bloody marys. Lehman now sells bitters and tinctures to Taste, Planter's House, Blood & Sand, Olio, Sardella and Reeds American Table.

Fausz marvels at Lehman's approach to the work. "Anne was impressive in the way she was able to infuse each herb with a story, a history, a personality," he says. "She is serious about what she does, but also has a great sense of humor and a deep devotion to and knowledge of the plants she grows. She has a tremendous knack for growing them and an appreciation for flavor. I think that's why just about every serious bar and kitchen in town knows her."

In collaboration with her husband, Lehman is also developing a line of ice cream — Audhumbla Ice Cream, named for a primeval cow in Norse mythology. The sweet treat is made with all local ingredients and her characteristically unique flavors, designed to challenge and delight the palate. The ice cream is made simply with cream, milk, eggs, sugar, Madagascar vanilla beans and a single herb, fruit, root, vegetable, leaf, nut or seed, either grown by Lehman or sustainably foraged from a known source in the wild.

One of the more unusual plants on Lehman's farm is a bonsai native to the Inagua district of the Bahamas — pineapple verbena. The tiny cream-colored flowers have an intense fragrance of jasmine and then develop into a small dimpled orange fruit. The leaves have a spicy aroma and taste of citrus, honey and vanilla. Lehman and Crass are preparing it to debut as a new ice cream flavor on the first day of spring.

Chris Meyer, now a co-owner of Kounter Kulture, met Lehman when she was at Blood & Sand, and later used Lehman's herbs for the pop-ups where Meyer and her partner refined their Kounter Kulture dishes. "People would pick up on small, subtle notes, which really made me happy that they were that into the flavors, and they would ask, 'What is this flavor?' It was always Anne's herbs."

And now Meyer is excited to offer the ice cream at private dinners catered by Kounter Kulture. "The subtle flavor and creamy textures are a wonderful complement to the food that we're doing," she says.

David Greteman of Sardella and Taste was a fan of Lehman's even before the ice cream line. "I make it a goal to have at least one drink on each menu with one of her tinctures. They transform and round cocktails so well," he says. But he's positively blown away by what she and Crass are doing with Audhumbla. It is, he says, "the best ice cream I've ever had."

Though Lehman's conditional use permit does not allow for signage, her neighbors all know about the farm; it's become a point of pride. Those who walk up the alley see her often during the growing season and regularly stop to chat about what she's harvested that week.

You might have an opportunity to see the farm for yourself — Dirty Girl Farms has been on the Sustainable Backyard Tour for three years in a row, hosting hundreds of attendees, and Lehman plans to participate again this fall. (For more information, visit www.sustainablebackyardtour.com.)

This year Lehman plans to add more edible flowers to her lineup, as well as additional roots, seeds, exotic herbs and fruits. The farm is "ever changing, ever growing," she says.

Today, Lehman's client list is impressive, but it wasn't always so. "Getting started was challenging. I did not go to high school here," she says. "I was not known. I'm shy, but I have forced myself to approach those chefs and bartenders who make what I like to eat and drink." Clearly, her efforts have paid off.

And for Lehman, her favorite part of her job is no longer just about getting dirty. It's about those interactions with the community, all those conversations with all the people who rave about her tiny farm's delicious bounty. She cherishes, she says, "the unsolicited love I get from anyone who loves what I grow."

Editor's note: A previous version of this story listed the wrong employer for David Greteman. He works for Sardella and Taste, not Planter's House. We regret the error.

Jump to comments
« The Ozark Trail Could Make Missouri a Hiking Destination. Why Isn't It Finished?   |   Could a Long-Neglected Stretch of Broadway Become St. Louis' Next Nightlife Hub? »