At the Cut, Chef Ari Jo Ellis Elevates the Sausage

Technically, the Cut is a total sausage fest — a temple to tube-shaped meat inside Cherokee Street's Fortune Teller Bar that offers more balls, belly and wieners than you'd find at the Pike House on Natural Bridge Road. In other words, it's perhaps the last place you'd anticipate being a bastion of culinary feminism, but chef Ari Jo Ellis is doing her best to change that.

Ellis never planned to take a sledgehammer to the glass ceiling of butchery, a male-dominated trade in a male-dominated field. When she opened the Cut last September, she was simply looking for a concept that would fit in the bar's limited kitchen space, which was formerly home to the Little Dipper sandwich shop. Sausages made sense, especially in light of Ellis' background in whole animal butchery, a skill she learned from James Beard award-nominated chef Rick Lewis at Quincy Street Bistro.

Ellis' tenure at Quincy Street actually predates Lewis. Before he turned it into a renowned bastion of from-scratch country-style cooking, Ellis worked there as a fry cook, preparing standard bar-and-grill fare at what was then a basic south-city bar. New to the industry and impressionable, Ellis was captivated by Lewis' penchant for bringing in whole animals and breaking them down.

Ellis quickly realized that she had a knack for the process, which she likens to the muscle memory involved in playing a sport. An athlete for most of her life, Ellis was drawn to butchery's physicality and repetition, and she took every chance she could to practice. Her education continued when she left Quincy Street to work with Lewis at Southern, and it became a master class when she got a job working at Bolyard's Meat & Provisions, the well-respected Maplewood butcher shop.

Ellis knew that she eventually wanted to own her own business, so she reached out to Bob Brazell of Byrd & Barrel for some advice. Though she'd previously thought she was at least two years away from pulling the trigger on a venture, when Brazell told her about the opportunity to replace the Little Dipper at the Fortune Teller Bar, she simply could not let it pass. Armed with little more than her knowledge of butchery and the support of friends, she came up with the concept for the Cut and opened her window for service on September 1.

Tailoring her concept to the Cut's space limitations was not a matter of comfort; it was a matter of necessity. The tiny kitchen has no hood system and therefore no fryer, grill or griddle, and the "restaurant" is nothing more than a window in the back of the dimly lit bar. Guests place an order at the counter, where they're given a flag to set on the table while they wait. Usually, it's a one-person show, with Ellis taking orders, cooking and delivering food. That she can do all of this — and at times break down a whole hog — in a space the size of a generous walk-in closet is an impressive feat.

MABEL SUEN
The order window is tucked in the back of Fortune Teller Bar.

What's even more impressive, however, is what she's putting out of that kitchen. Though her menu is tiny and the main dishes are entirely pork-based, her talent makes up for lack of breadth. How could you want for anything more than the "OG," a classic German-style bratwurst with the exterior snap and luscious filling that only comes from a quality, handmade sausage made from non-commodity pork? Just a suggestion of black pepper and beer infuses the sweet meat, which can be topped with everything from molten cheese to vegan chili but begs for the simplicity of the house's zingy mustard, popping with whole seeds.

Ellis takes that same brat base and infuses it with Middle Eastern spices for her "Curry Brat," a gently spiced take on the traditional currywurst. She garnishes the sausage with housemade curry ketchup; the addition of the Indian spice blend adds depth and warmth to the tang of traditional ketchup. My only complaint — and I found this on all the sandwiches I tried — is that the bun was too crusty and got in the way of enjoying the pure sausage bliss. I found myself discarding it so I could cut to the chase.

Her skills are not limited to sausages. Because Ellis gets in whole hogs, she has to utilize as much of the animal as possible, and her dishes reflect whatever she has on hand. On two of my visits, that was pork belly, which she opted to cure with pastrami spices, then smoke and slice thinly. The fatty meat is infused with peppery flavor that cuts through the richness. However, Ellis does not shy away from decadence, using the pork pastrami as the main event for her riff on the Reuben sandwich. Pungent sauerkraut is softened by the sweetness of green apples, which mingle with tangy 1000 Island dressing to form a delicious condiment. Sharp Swiss cheese melds it all together onto griddled rye bread. It's breathtaking.

Her meatballs are no less extraordinary, a case study in why pork should be considered essential in any meatball worth its salt. Hers are made entirely of it, resulting in a gloriously fat-flecked sphere of meat with a shockingly creamy texture. Ellis balances the fattiness with Italian-spiced marinara and housemade giardiniera that not only gives zest but also crunch. It's the gold standard of meatball subs.

Though the Cut is meat-centric, Ellis makes all of her side dishes vegetarian or vegan in an effort to appeal to the high concentration of vegetarians in the Cherokee Street area. If they are skeptical about what a butcher can do with plant-based recipes, they need to try her vegan chili, a warm, rich bowl of beans and assorted vegetables that is like a hybrid of traditional chili and minestrone. There is no heat to the dish. Instead, Ellis opts to let the vegetables, like celery and carrot, shine through with just a dash of chiles and salt. It's so rich, you would swear she threw some pork scraps in it, though this is not the case.

Other standout side dishes include slices of roasted sweet potatoes, liberally sprinkled with scallions and smashed, and a warm salad of roasted savory potatoes tossed in creamy mayonnaise and flecked with black pepper. And for the late-night crowd, she does pulled-pork nachos, smothered in a creamy white cheese sauce evocative of a classic mornay.

MABEL SUEN
The pork belly sandwich, a riff on a Reuben, is topped with 1000 island dressing, braised cabbage and Swiss.

It's clear that Ellis' talent will outgrow the Fortune Teller Bar's space. Already she supplies a few restaurants around town with what's left over from the week's whole-hog breakdown as well as wholesale sausages, and it makes sense that she would want to offer the same products to consumers in the form of her own storefront. If her friendship with famed Cochon butcher and fellow lady bad-ass Leighann Smith foreshadows anything, Ellis could find herself opening a bona fide butcher shop of her own one day, ideally in the not-so-distant future.

Until then, we'll just have to enjoy her wares at the Fortune Teller Bar, where her tiny operation can barely contain such a large talent. For a self-described tomboy who has spent her life pursuing male-dominated endeavors, Ellis' freshman effort proves that she doesn't just run with the boys; she can win the race. 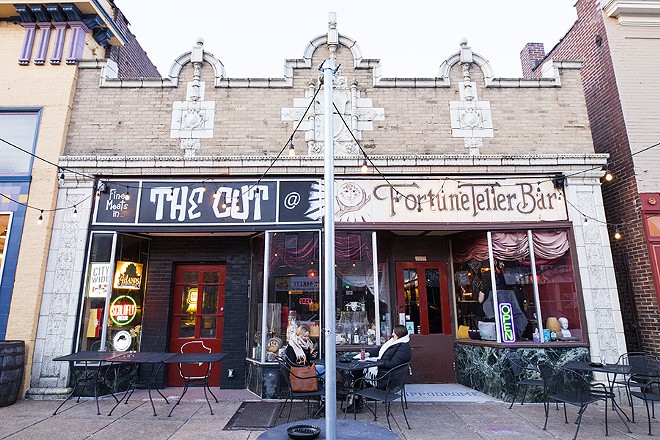