"Autobiography" and bootleg box prove that when it comes to the Beatles, you can never just let it be 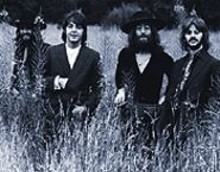 Doug Sulpy and Ray Schweig-hardt's book Get Back: The Unauthorized Chronicle of the Beatles' Let it Be Disaster contains the sort of minutiae that give a hard-on to the hard-core. The 332-page book, published last year, is less a narrative than an autopsy constructed from bootlegged outtakes made during the January 1969 rehearsals for the documentary Let it Be, itself a sort of horror film with a Top 10 soundtrack. The two authors simply sat down with hours upon hours of tape and transcribed what they heard -- every argument, every oldies cover, every improvised jam, every attempt made by George Harrison to leave the band (on Jan. 10, for instance, "George is speaking to John and calmly announces he's quitting the Beatles immediately ... George coldly suggests that the other Beatles write to the New Musical Express in order to get a replacement for him"). Sulpy and Schweighardt are true obsessives, leaving no crumb behind, meaning that for every revelation, there are a hundred useless scraps: Of a one-second, ah, version of "All Things Must Pass," the two write, "This briefest of fragments consists of nothing more than the word "all.'"

Get Back ranks among the most compelling accounts of the Beatles' final days; it's the rock & roll equivalent of reading Richard Nixon's surreptitious Oval Office tapes, a literary exercise in voyeurism. But in the end, sitting down with the book is an utterly joyless experience. Without the soundtrack -- the ragged rehearsals of embryonic classics, the improvised wanking, the half-remembered versions of their own hits, the bitching and moaning -- what is the point? It's like listening to someone describe an episode of Seinfeld or a porn video. You had to be there -- or, barring that, at least own the bootlegs from which the authors "wrote" their book.

For the first time, such a thing is actually possible: Last month -- no doubt to coincide with the release of the Beatles' own "autobiography," the 60-buck, six-pound oral history The Beatles Anthology -- the Vigotone label released the 17-disc bootlegged boxed set Thirty Days: The Ultimate Get Back Sessions Collection. It's the most complete account of those sessions ever made available (legally or, in this case, otherwise), including four discs' worth of material recorded at the Twickenham Studios and a complete disc of producer Glyn Johns' first compilation for the scheduled but never-released Get Back album. The discs dispense with much of the sarcastic, bitchy chitchat; only here and there do we get glimpses of the body beginning to stiffen with rigor. On Jan. 29, when Paul suggests the band run through "One After 909," an especially testy John responds with a sneering "Fuck you"; we also hear, quite literally, Harrison storming out of the rehearsals, after which the band continues without him as though nothing's happened. Priced at nearly $300 -- or five times the cost of the new coffee-table book, which is a coffee table all by its lonesome -- the box is for fetishists only, or, at the very least, the fan who felt dissatisfied with the three double-disc Anthology collections released in 1995 and 1996, which were the ultimate tease: They gave us only enough to want more. (As with the book, the Beatles' most recent compilations always seem to leave out the best parts.)

Thirty Days, which Vigotone says consists of the best material culled from "more than 500 rolls of tape," fills in gaps even Sulpy and Schweighardt overlooked. The label insists that more than 50 percent of the box is being released for the very first time, with most of that (indeed, about 90 percent) coming from the rehearsals at the band's own Apple Studios on Savile Row, which take up nine discs. For the first time, we can hear in its entirety the 47-minute concert on the roof of the Apple Studios; we hear the dozens of Chuck Berry, Buddy Holly, Elvis Presley, Carl Perkins and Gene Vincent covers (not to mention McCartney's version of "Hello, Dolly"); we hear myriad run-throughs of "All Things Must Pass" and "Let It Down," both of which ended up on Harrison's solo debut; we hear John Lennon and Billy Preston funking up "I Want You (She's So Heavy)," until one take sounds as heavy as Blue Cheer. And we hear off-the-cuff versions of Lennon-McCartney songs that date back to the earliest days of their friendship, among them the country-tinged "I'll Wait 'Til Tomorrow" and the most appropriately titled "Won't You Please Say Goodbye."

The boxed set, like the new book, does its very best to demythologize the Beatles -- to present them as just four guys in a band who loved each other till they could no longer stand to be in the same room with one another. If these guys thought so little of their own history -- on Jan. 28, for instance, they turn out a slow, bluesy, nearly off-key rendition of "Love Me Do," the band's very first single -- how come we've spent 30 years turning them into gods? "The Beatles were always a great little band," Paul McCartney insists near the end of Beatles Anthology. "Nothing more, nothing less." The true believer might take umbrage at his modesty -- indeed, the Beatles' shadow will forever touch any band that springs to life in a garage -- but after listening to the boxed set in its entirety, you kind of see his point. Out of the public's earshot, they were known to make a horrible mess. It's nothing less than astonishing to discover the Beatles forgot words to songs you've known word for word, note for note, since you were a child. They thought nothing of legacies, of myths, of meanings. They wanted only one thing by January 1969: out.

"Suddenly, we didn't believe," Lennon said in one of myriad interviews cut and pasted into Anthology. (Most of the quotes from the book can be found on the eight-tape Anthology boxed video set, which sells for $130; McCartney, Harrison and Ringo Starr augmented that four-year-old material with some new interviews, but much of the book feels too familiar to anyone who saw the shows when they first aired.) "And it'd come to a point where it was no longer creating magic ... Paul has this idea that we were going to rehearse, more like Simon and Garfunkel, looking for perfection -- and then make the album. And of course we're lazy fuckers, and we've been playing for 20 years, for fuck's sake -- we're grown men, we're not going to sit around rehearsing. And we couldn't get into it, and we put down a few tracks, and nobody was in it at all. It was just a dreadful, dreadful feeling and, being filmed all the time, I just wanted them to go away."

Of all the Beatles boots on the market -- and there are dozens, including a remarkable nine-disc BBC box and several grab bags of outtakes and audition tapes -- Thirty Days is perhaps the most intriguing, if only because it lets us listen to the legends on their deathbed, breathing their last gasps. (Indeed, it's astonishing they would make one more record together, Abbey Road, after these torturous sessions, which were filmed by director Michael Lindsay-Hogg for the now-out-of-print Let It Be.) The birth of a band is fascinating only to those who like their stories happy and sentimental; it's all giddy grins and optimistic giggles, the shiny faces of unblemished promise. The new book is filled with smiley-faced photos and top-of-the-world tales, such as the day the boys smoked pot with Dylan or the time Paul taught Elvis a few things about bass. But the death of a band -- especially this band, these best friends who would so quickly become bitter rivals -- makes for a far better tale, especially when it's laid out for you without history's censors getting in the way.

Listening to the boxed set in its entirety is like watching the Zapruder film over and over; you squint hard and try to see the precise moment of impact. It never gets dull listening to version upon version of "Get Back" or "Don't Let Me Down" or "Across the Universe," because no two versions are at all similar. Each is weighed down by the baggage of the moment. Where one "Get Back" will be turgid and lethargic, hinting at the crushing boredom that threatened to consume the Beatles in 1969, another will be frenetic and thrilling, imbued with joy or even a little rage (the trio version of "Get Back," recorded three days after George "quit" the band, sounds like something off Kick Out the Jams). It was as though the boys had enrolled in a monthlong therapy session in which they could finally let it all out, for better or worse.

"What happened was, when we got in there, it showed how the break-up of a group works," McCartney says in the book. "We didn't realize that we were actually breaking up as it was happening." But how could McCartney have missed it? Only he wanted to be there; the rest considered it "work" -- up at 8 a.m. for the day job they never before had. They resented Paul for taking the role of bandleader, especially given the fact they had so little time to recover from the making of the White Album; when Paul ordered them into Twickenham to begin filming rehearsals for a documentary, which was to culminate in a live performance (they had no idea where at the beginning of January 1969), the other three members all but revolted.

"Even the biggest Beatle fan couldn't have sat through those six weeks of misery," John said. "It was the most miserable session on earth."

Harrison was surly from the get-go: He had spent the last part of 1968 hanging out with Bob Dylan and the Band in Woodstock, N.Y.; he was also producing other artists and working on his own material. He felt he no longer needed to play third wheel to Lennon-McCartney, and when McCartney summoned him back to England for this half-assed making-of-an-album documentary, he at first thought of staying away. He knew it would be unhealthy. He know it would be the Beatles' undoing.

"But I can remember feeling quite optimistic about it," Harrison adds in the book, sounding always like the voice of reason -- the man in the middle, choosing sides. "I thought, "OK, it's the New Year and we have a new approach to recording. I think the first couple of days were OK, but it was soon quite apparent that it was just the same as it has been when we were last in the studio, and it was going to be painful again."

You can hear that pain on Thirty Days: It's palpable, almost unbearable in spots. But every so often, when the foursome stumbles over "Blue Suede Shoes" or "Great Balls of Fire" or "Save the Last Dance for Me," you can hear the joy of being a Beatle. And no book, least of all one so official, will ever give you that.