Because GlobalHack Is Putting the Midwest on the Map 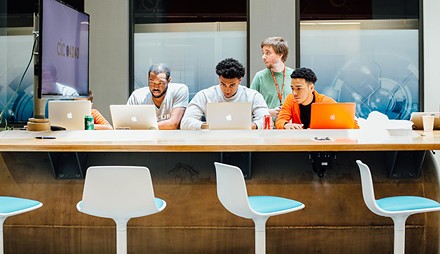 Plenty of brilliant developers throughout St. Louis build fun apps for the hell of it. But what if those geniuses were charged with solving society's problems? And what if they were backed by some serious cash?

GlobalHack (911 Washington Avenue, Suite 657, 314-896-4225) challenges St. Louisans with both, aiming to elevate the Gateway City's stature as a haven for tech startups even while contributing answers to real issues that hold our city back. For 2016, GlobalHack is partnering with St. Patrick Center, compelling participants in a weekend-long hackathon to consider how new tech solutions can help agencies better serve the local homeless population.

To do this, the foundation and event bring together participants from all over the tech realm — engineers, designers and everyone in between — for lots and lots of coding, as well as crash courses in team building, critical thinking and business planning.

The "bettering humanity" angle is pretty sweet, but participants can get more than just warm fuzzies from putting their minds to work. During this year's hackathon, scheduled for October 21 to 23 at Chaifetz Arena, GlobalHack will award $1 million in cash prizes to the teams whose prototype software best advance real-world solutions. That's a huge step up from the $275,000 that's been awarded in total in GlobalHack's previous five events since 2013.

And a big cash infusion isn't the only increase GlobalHack is seeing in 2016. While hackathon divisions for youth, college and professional participants were already up and running, GlobalHack just launched a set of children's programs that give kids hands-on opportunities in computer science and encourage them to explore careers in the tech world. What good is a startup community without bodies to, well, start it up? GlobalHack founders and local entrepreneurs Drew Winship of Juristat, Travis Sheridan of Venture Cafe and Gabe Lozano of LockerDome know that a pipeline of eager, creative students is vital for sustaining an ecosystem of innovation, especially in the oft-overlooked Midwest. And with mentors and partners beside these youngsters, they just may be able to solve the intractable problems that scientists, businesses and politicians have failed to fix for decades.

Tweet
Email
Print
Share
(Sorry, no information is currently available for other years in this same award category.)
« PREV: Because Lewis Claybon Proves That S...  |  NEXT: Because LaunchCode Is Tackling the... »