The Honkeys are making waves 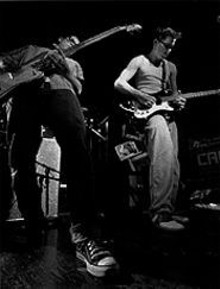 When Honkeys guitarist/head honcho Jeff Positive talks about his discovery of surf music, you believe him. It's that tone of unwavering authority in his voice, the lack of an annoying invisible question mark of doubt at the end of his statements. He's got little apparent insecurity and, more important, no cockiness, even when he tells you that he and his brother, in a roundabout way, invented their brand of surf music before hearing the original stuff.

"When I first started playing the guitar," he says. "I was mimicking guys like Ravi Shankar and trying to get that sitar sound on my guitar, because I loved the way the sitar sounded. That's when I started doing the real pizzicato picking, real quick, and I started playing in a coffee shop, and the stuff I was doing there was kind of a mix between flamenco and this bizarre sitar thing -- all instrumental. And my brother, he was playing the drums, and he was really into the Descendents and (their drummer) Bill Stevenson and the way he would play drums. And what my brother would do, mixed with what I would be doing on the guitar, it sounded exactly like surf. And we didn't even know what it was until Pulp Fiction came out. We heard Dick Dale doing his thing and I was like, "Wait, wait, wait! Yeah!'"

Positive and his band, the Honkeys -- which consists of Cullen "Stab" McGrane on bass, Jovian Kind on drums and newly recruited Micah Edge on Farfisa organ -- have been roaming St. Louis for four years. "But we weren't a surf band," Positive says. "We were a noise band, kind of like the Boredoms. We had seven people in the band. We had a bunch of horns, a bunch of people standing around shouting into microphones."

Any band that references the Boredoms is OK in our book. Add to this a few other references in their press bio ("With respect to what William Tecumseh Sherman did to the State of Georgia and what Marcel Duchamp did to modern art, The Honkeys decided to pick at rock "n' roll's crusty scab, hoping to both cause further infection and leave a very noticeable, permanent scar"), and you've got the makings of an on-the-ball, worldly bunch of rock & roll miscreants, a far cry from your run-of-the-mill "Dude, let's start a surf band' band.

The Honkeys couldn't have picked a bigger scab, because the resurgence of American instrumental surf music has been one of the most curious and, ultimately, fruitless musical phenomenons of the past decade: curious because it appeared stone-cold dead for more than two decades; fruitless because most of the new breed offers little new to a genre perfected in the early '60s by Dick Dale, Davie Allan, the Ventures and the Challengers.

So you're forgiven if you reflexively dismiss bands describing themselves as "surf," as long as you leave room for the Honkeys, because, well, they rule. They behave and perform as if they invented the music, because they did. The band can uncover a weird riff and then ride it for all it's worth, barebacking the melody through leaps and landings and in the process drawing the subtleties from it. They're as good as any of the handful of quality bands involved in the surf revival (yes, there are some) -- the Untamed Youth, the Mummies, the Phantom Surfers, Man ... or Astroman? -- and can hold their own with the legends for a simple reason: They're not mimics.

"I wouldn't necessarily say it's surf music," interjects Positive. "I would think it'd be more, simply, instrumental. I really like the idea of raw emotion running through the guitar amps without being bogged down by words. I really like that idea. Classical music I really love, and jazz. Plus, it's fun to listen to instrumental music and wonder, "What exactly is this doing for me, without having a structure to it.'"

"It's a much harsher sound than modern surf," continues drummer Kind, "which I don't listen to at all. I really like traditional surf. I really love the big beat and a lot of rockabilly, a lot of surf. Modern surf is just so wishy-washy. I joined (the Honkeys) knowing that they needed a drummer, and I just wanted to play. So I was just going to possibly play for a month until they got a drummer. But the sound blew me away. It wasn't surf. It was this monster dragstrip sound going on that wasn't going to let go."

Live, the Honkeys have an amazing trump card: the Saltines (crackers -- Honkeys -- get it?), two bombastic go-go dancers who flank the stage and rip through the songs as the Honkeys bang out the music. The result is pure genius. Not only does the music get the crowd going, the Saltines -- perennial shaker Jessi Cerutti and new dancer Catherine Brown -- move frantically; they know all the songs and know exactly when to do the big leg kick to drive the point home.

"We'd been talking about go-go girls ever since we started," explains Positive. "With the noise band, we thought it'd be fun to have girls dancing to what we do, but it never came out. It was just an idea. Then I saw (Cerutti) dance at a Los Straitjackets show, and I was like (his eyes widen), "Wow -- she can really move.'"

Geez, can Cerutti strut her moves. ("I just developed them, but not really on purpose," she says. "I just couldn't help it. After listening to them so much, it just kind of comes. Just like a kick and stuff, it just kind of happens.") She wiggles and snakes as the band propels the rhythm. She uses her whole body and gets so lost in the music that not only is she a dancer, she's a musical instrument herself. She even dances with her face as the music plays, changing expression to make a point, putting on a sassy glare when the music turns ominous, as on "Fire Backstage," a song whose title perfectly describes the effect of the Saltines.

"There's a quote that Kierkegaard wrote about this clown who goes up on a stage and tells everyone that there's a fire backstage," explains Positive of the origins of the song's title. "And everyone's sitting in audience laughing and clapping at the clown because they think it's a joke. And the clown is like, "No, seriously. There's a fire backstage, and it's bigger now,' and everyone's like, "Yeah, yeah, do some more!' And Kierkegaard thinks that that's how the world's going to end. He thinks that it's gonna happen while people are clapping to this beautiful sight, and I wrote this song for a saxophone to kind of shine out there so that people would go, "Oh, wow, yeah, great saxophone,' without ever really understanding that there's this really bizarre chord change."

The Honkeys gig around town often. In the next few weeks they're on opening slots with Snuff at the Galaxy on March 24 and with Knuckel Drager (yes, sic) and the Blue Moon Boys at the Hi-Pointe on April 7.