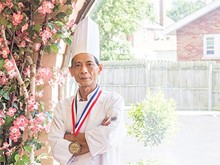 Fans of the delicious Chinese fare served up at Chef Ma’s (10440 Page Avenue, Overland; 314-395-8797) suffered a serious shock this spring when the restaurant vacated its longtime space on Woodson Road, leaving behind an empty building with a sign reading “New Restaurant Coming Up” on the window. That concern was short-lived, though, and when the north-county eatery reopened in May, diners breathed a collective sigh of relief. But as it turns out, worse problems were on the horizon, and on August 5, the eponymous Chef Ying Jing Ma unexpectedly shuffled off this mortal coil. Diners, who had grown used to seeing the brilliant chef milling about the restaurant, manning the kitchen or chatting up customers enjoying his transcendent food, were devastated by the news, and fears set in immediately that the culinary delights he was known for would be next. But, thankfully, the employees left behind at the restaurant are committed to soldiering on, using Chef Ma’s transcendent recipes to carry forth his outsized legacy. That means the traditional Chinese dishes the restaurant is best known for, including the house specialty Hainan chicken, will still be available for its diehard fans, as will the elevated Americanized dishes, such as hot braised chicken and Mongolian beef. Chef Ma’s passing will forever leave a gaping hole in the St. Louis area’s dining scene, but thanks to the otherworldly recipes he honed over a lifetime, his memory will live on. —Daniel Hill