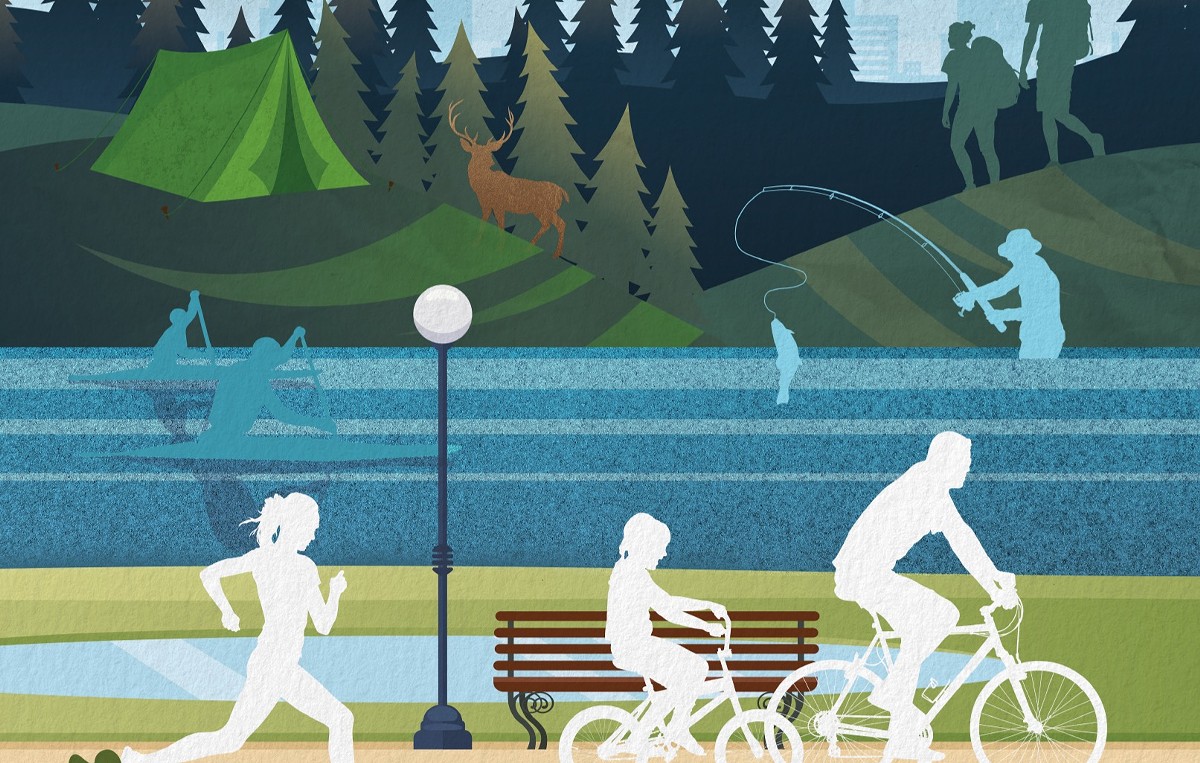 St. Louis, rightly, makes all the lists of best sports towns, largely because of Cardinals and Blues fandom. Add in some good college basketball and that brief, glorious, maybe-not-completely-finished reign of the Battlehawks, and it’s a sports lover’s dream. But we don’t get enough credit for the opportunities for self-powered diversions here. A world-class public parks system, abundant local bike shops, kayaking outfitters, a growing network of running paths, all manner of outdoor fitness classes and some of the finest dive-bar bowling alleys known to man make this town an underappreciated hot spot for action and adventure. And while we might be a little salty about the slight, it means it’s even easier to go and do what you want.
—Doyle Murphy 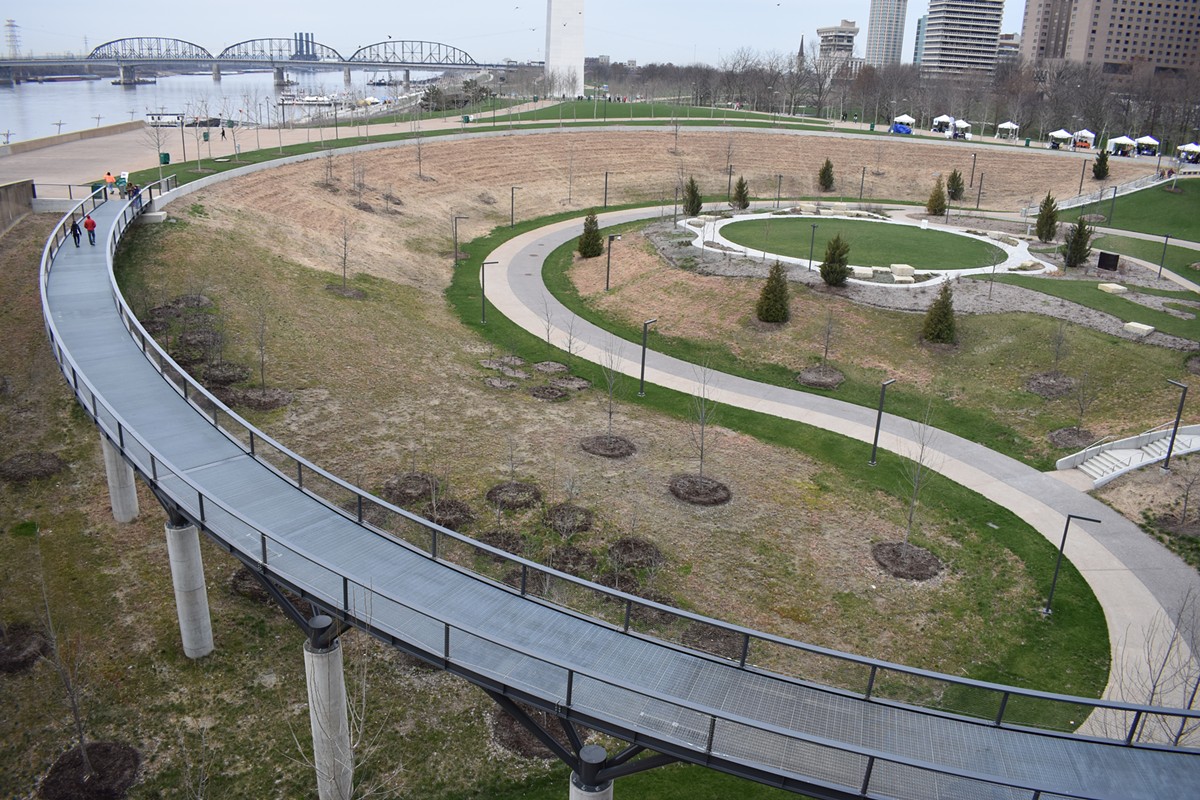 Pretend you’re a tourist and knock out your run in Gateway Arch National Park (11 North Fourth Street; 314-655-1600), while enjoying one of the city’s greatest sights. Get there early, and you’ll not only avoid the majority of said tourists but see the sunrise reflect off the Arch. It’s a scene that will still awe you, no matter how many times you’ve seen it. The new expansion offers wide, paved paths that meander through the grounds. A quick, 1.5-mile loop is infinitely customizable, depending on how hard you want to go. Feeling like Rocky? Hit the stairs that rise away from the Mississippi River. Add onto the route with a jog across the Eads Bridge to the north, or cruise west through Downtown, hopscotching from one park to the next until you reach Soldiers Memorial. Curl around and come back into the park along the north side of Kiener Plaza. In warm weather, you can finish up with an outdoor yoga class that convenes on Tuesday mornings into early October. Don’t let the tourists have all the fun. —Doyle Murphy

Best Campsite within an Hour of St. Louis: Klondike Park 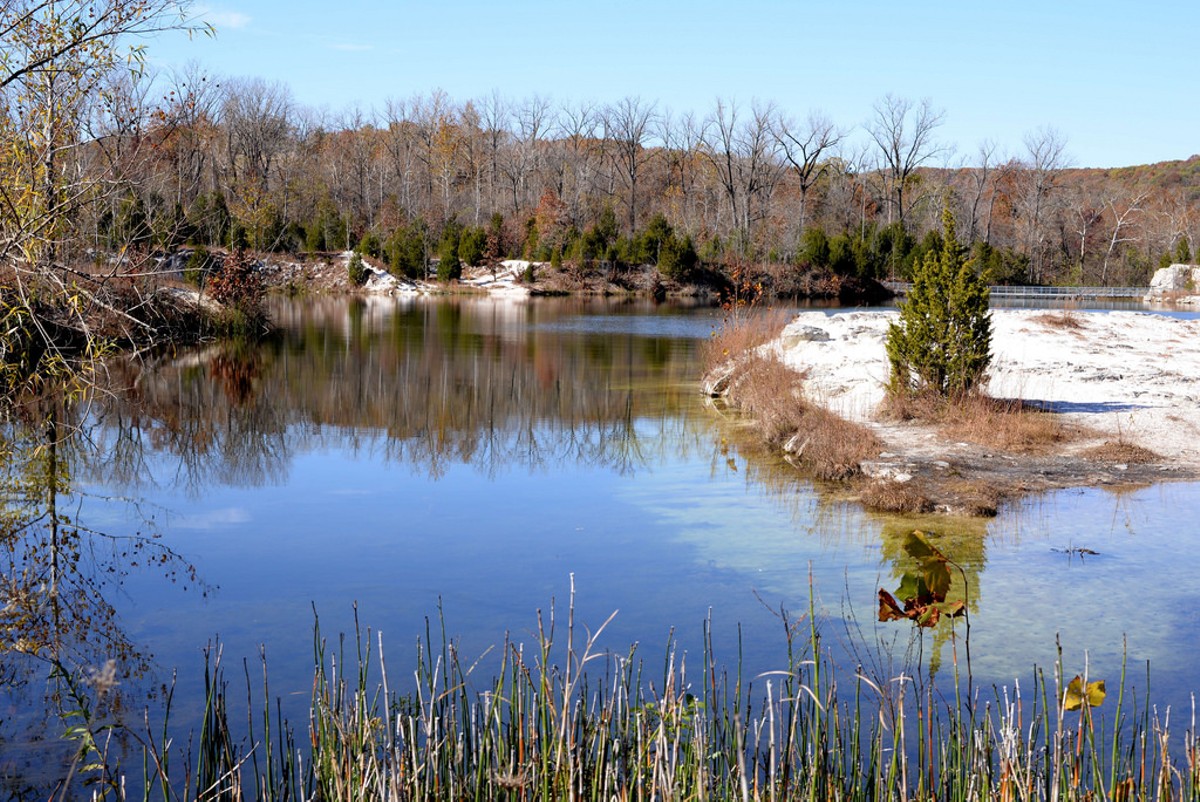 You can get the best of both worlds at Klondike Park (4600 South Missouri 94, Augusta; 636-949-7535). Put some distance between you and the city for an evening or weekend by exploring the park’s 250 acres. Settled in Defiance, if you seek an outdoorsy experience in easy proximity to St. Louis, Klondike has 43 available spots where you can pitch a tent. Enjoy Klondike’s quarry, which is perfect for fishing. And the white sand on its beach can almost make you forget you’re not on vacation somewhere warmer. Hikers and bikers can also enjoy the Katy Trail once settled in. Those who just don’t want to sleep in a tent but still want to camp can rent one of the site’s six cabins, as well. —Jenna Jones 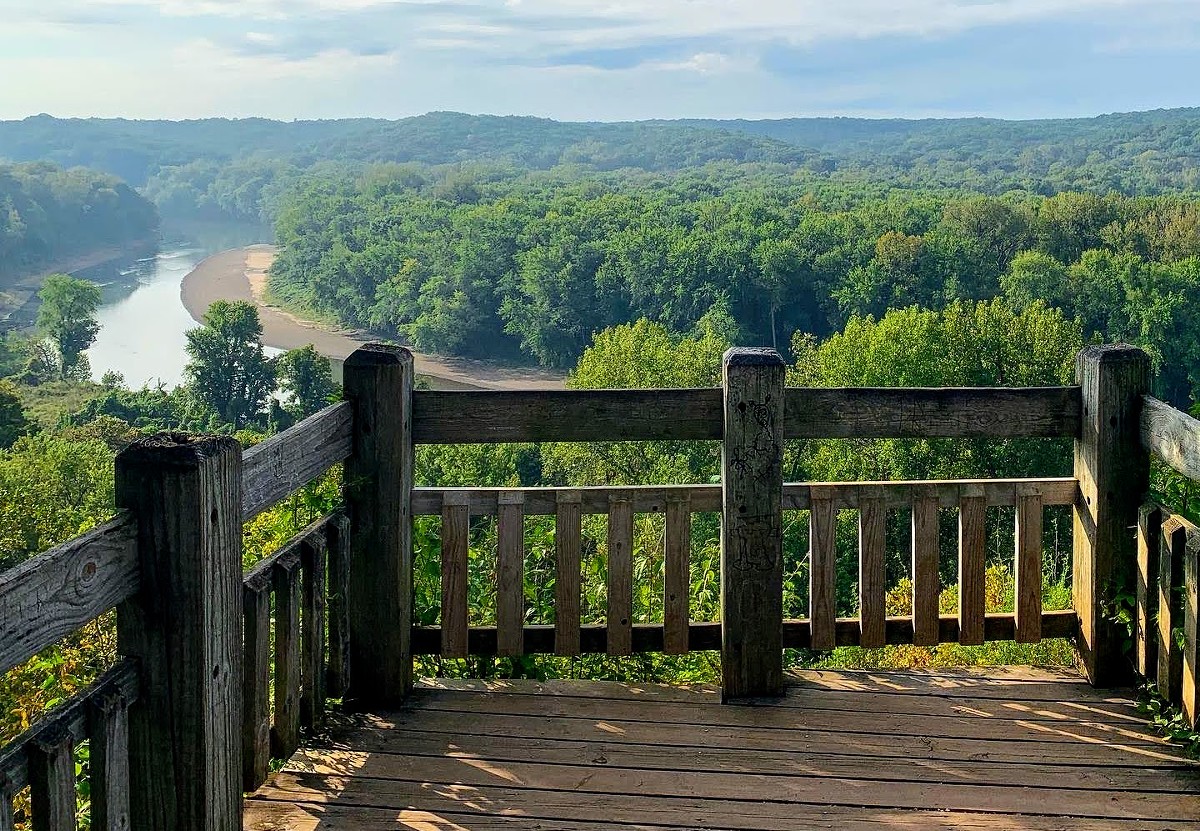 An interesting history and even better views await you at Castlewood State Park (1401 Kiefer Creek Road; 636-227-4433). The large park used to be a popular partying venue but has since been cleared away to accommodate hikers and bikers alike. Castlewood straddles the Meramec River, spanning over 18,000 acres. In all of its glory, the park in St. Louis County tangles itself in eight different hiking trails. Trails vary in difficulty and sights to be seen. Trek through the Al Foster trail on what used to be an abandoned railroad track or maybe take an easy loop with the Cedar Bluff Loop. The River Scene Trail, featuring sweeping river views and wooden staircases, is among Castlewood’s most popular. Whatever trail you take, you’ll get in nature views and plenty of exercise. Lush green trees, the long river — it’s a perfect place to get away for the afternoon while still staying close to home. —Jenna Jones 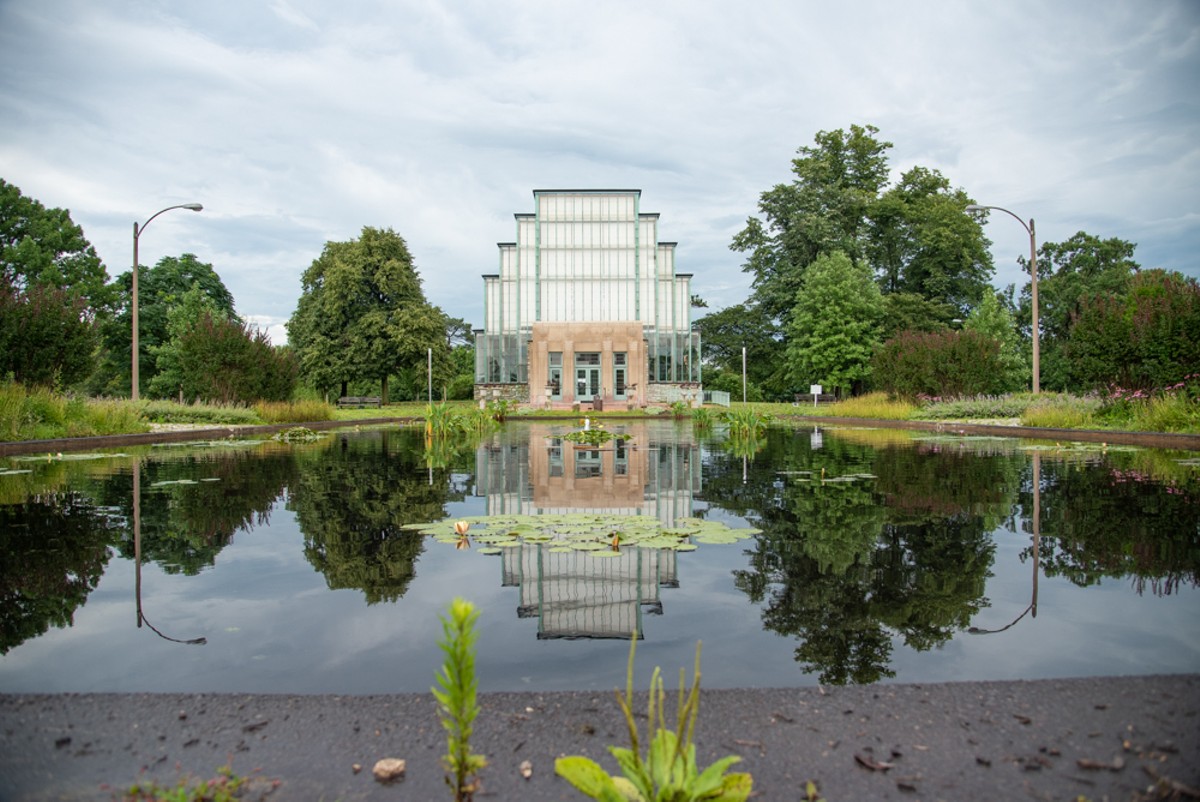 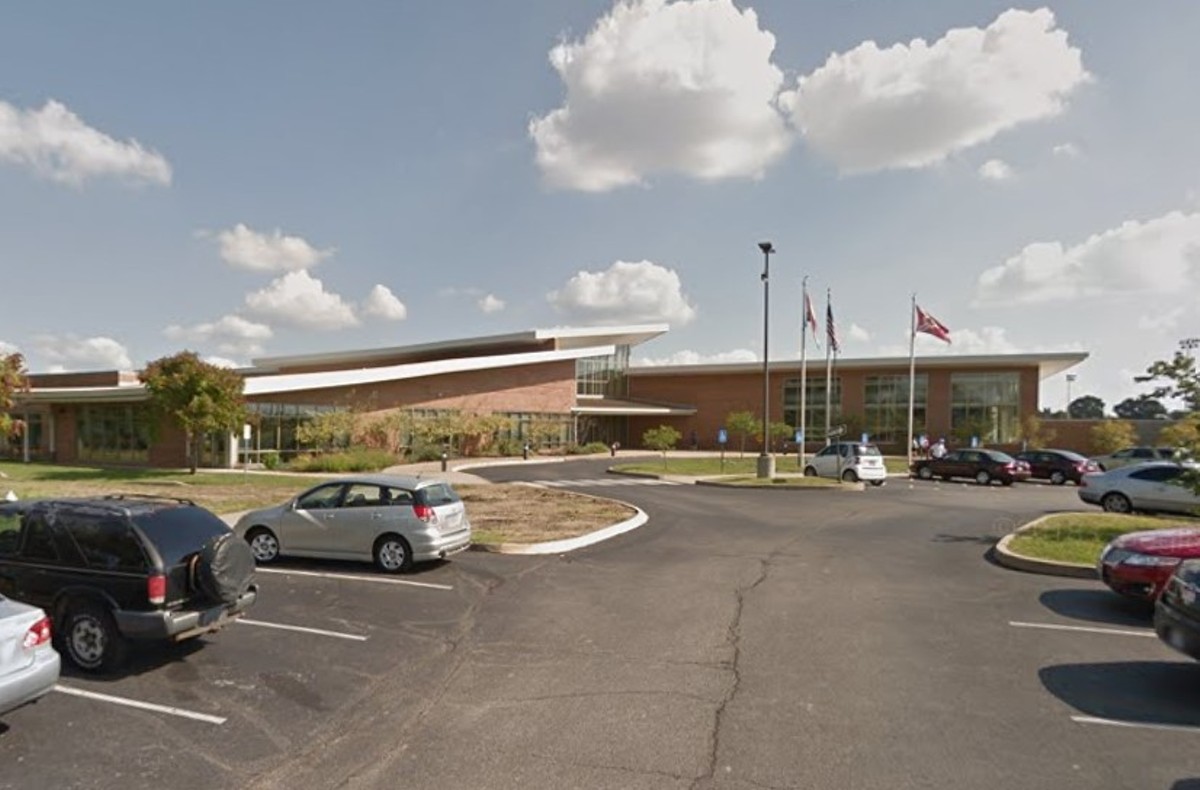 There are fancier places and even cheaper places, but the Carondelet Park Rec Complex (930 Holly Hills Avenue; 314-768-9622) is a big, solidly equipped gym that you might actually enjoy. Instead of gymbros and aggressive sales pitches for tanning packages, you might see Vietnamese grandmothers rolling along on the ellipticals next to young guys getting in their warm-up. Kids come in for afterschool programs, and dads strap on knee braces for pickup basketball. It’s a mix of people that feels like the neighborhood, with preening at a minimum. Entering at street level, there is a walking/running track that circles above a large, lower-level weight room, arranged with your customary free weights, benches and racks at the front and treadmills and bikes at the back. The walkway passes through a dividing wall and takes you over two full-size basketball courts. Along the way, you pass classrooms and carve outs where you’ll often find people doing bodyweight exercises. The crown jewel of the place is the pool, which features indoor and outdoor places to swim and hang out as well as a waterslide so big you can see it from Interstate 55. Top it all off with a walk through Carondelet Park. You won’t even miss your commercial gym. —Doyle Murphy 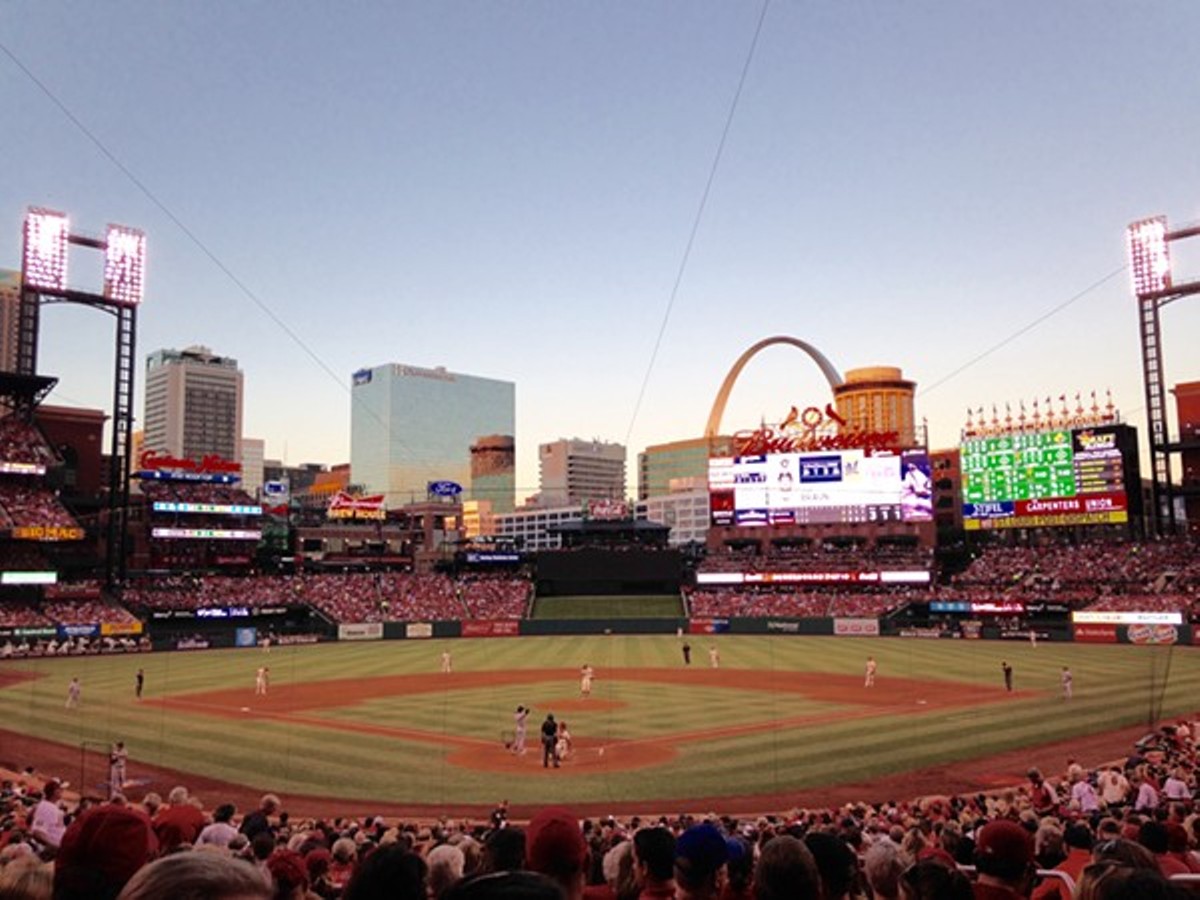 Harrison Bader has been a catalyst on and off the field this year. At Busch Stadium (or any other stadium), his speed has allowed him to conquer base paths and run down fly balls for breathtaking catches. His energy helped propel the Cardinals to a seventeen-game, record-breaking winning streak. Even when he’s not actively playing, he celebrates with kids behind the dugout and pumps up his teammates. There’s no question Bader has quickly become a fan favorite here in St. Louis, and there’s no question that it would’ve happened regardless of how many home runs he’s hit this season. Fellow Cardinals player Adam Wainwright told the St. Louis Post-Dispatch that Bader just has an “aura” about him, and we can’t help but agree. Bader’s won both Cardinals’ fans and our hearts. —Jenna Jones 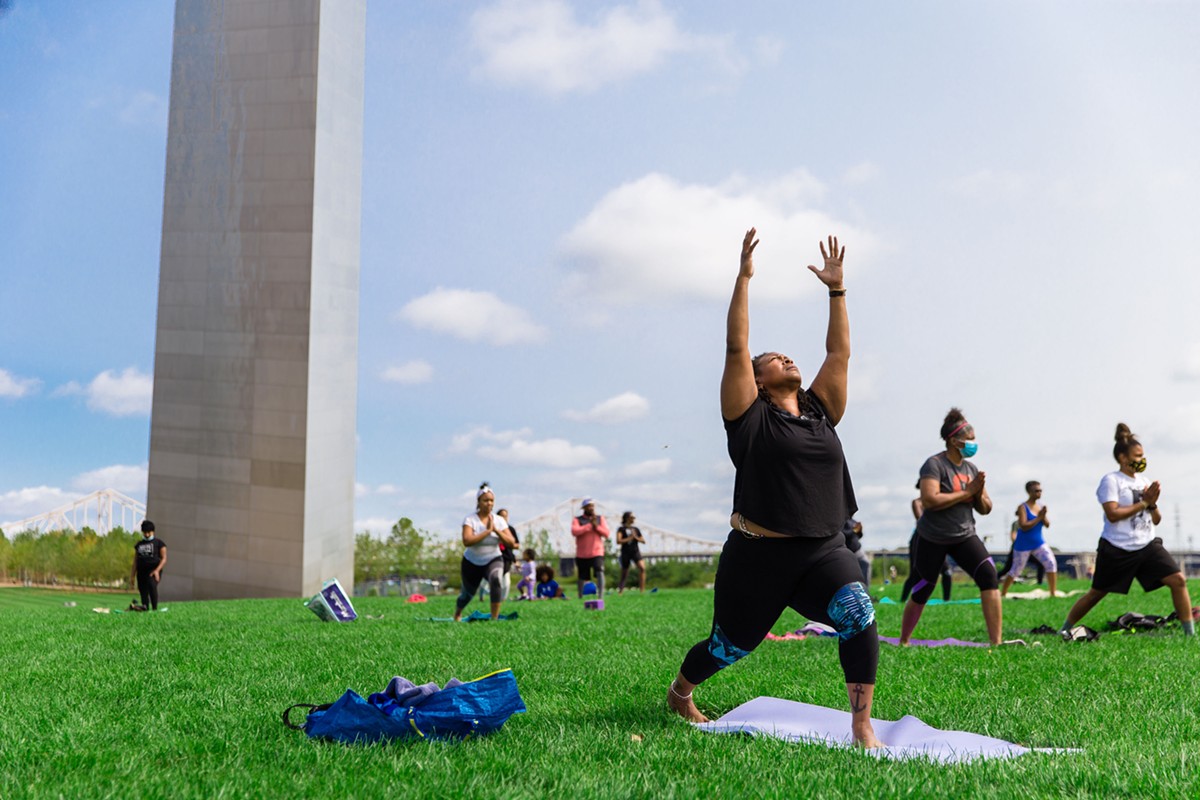 The pandemic made isolation the status quo, keeping people inside and away from group fitness classes — and leaving those hoping to get more active in yoga with the option of, at best, interacting with their computers and following along with far-flung instructors. But if you passed the Arch grounds this past year, you may have spotted the bending and flexing participants at the Just Breathe STL events hosted by The Collective STL (1400 North Market Street; 314-200-5796) yoga studio. Founded by a group of Black yoga instructors, the Collective’s classes operate through a donation model, with participants paying what they can — and whether you’re at the Arch or the studio’s physical location in Old North St. Louis, it’s all about putting aside the chaos of the day, feeling the energy of your body and learning to just breathe. —Danny Wicentowski 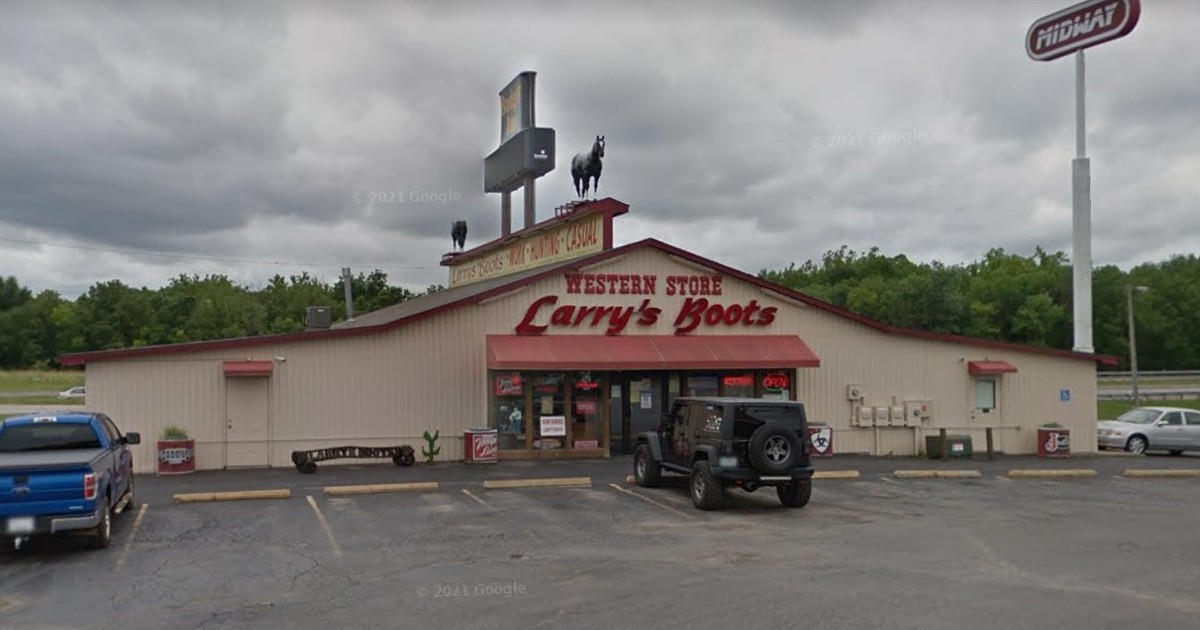 If you want to get out of St. Louis and want to take a little day trip without breaking the bank, Columbia, Missouri, is where it’s at for good cheap times. Not only can you get there and get back in a day, eliminating the need to spend money on a hotel, there are plenty of cheap or free things to do there, too. After you’ve taken a swing by the big burr oak tree (Google it) and eaten some pizza from the always-delicious Pizza Tree, the best place to see some cool stuff is Larry’s Boots (6401 US-40 Suite A, Columbia; 573-446-2668). Larry’s is a lot like any other rural boot store in many ways. However, in addition to work boots used on the farm, the place also has a wide selection of stylish boots that are made for dancing. Women can find the rhinestone boots that blond young ladies always seem to be wearing to country concerts, and Larry’s even carries some of those amazing Mexican cowboy boots with the extra-pointy swoop toes. —Jaime Lees 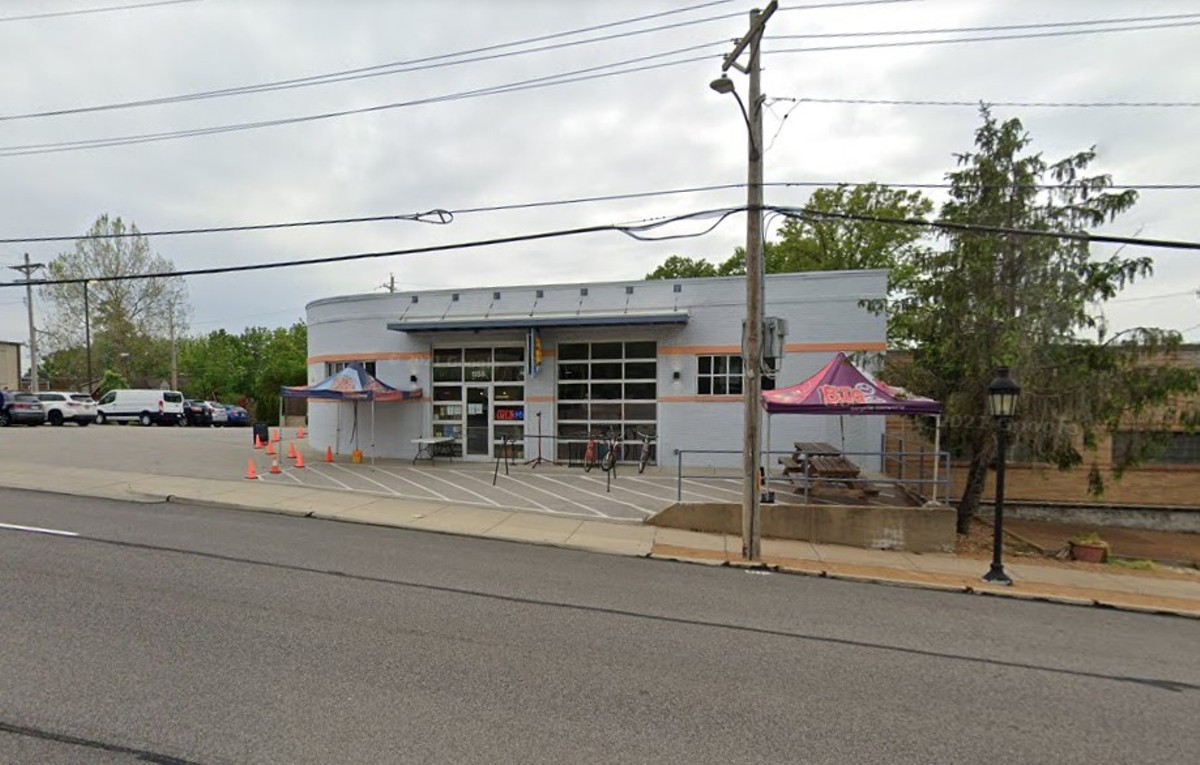 In a sea of very good local bike shops, Big Shark Bicycle Company (multiple locations including 1155 South Big Bend Blvd; 314-862-1188) is, well, a big fish. They’ve got a solid selection and are happy to order anything they don’t have. But the key is they’re approachable, whether you’re just getting started or ride 100 miles a week. The cliché of the snobby bike shop employee is overblown (most are cool with anyone interested in bikes), but it can be intimidating for newcomers to ask what might seem like dumb questions. Big Shark’s staffers have all been friendly and unpretentious in our experience. It’s also nice to have access to multiple locations throughout the metro region. Those two wheels tend to take you all over the place. —Doyle Murphy