Bet the Ranch: What were the odds? Lumière Place has a steak house! 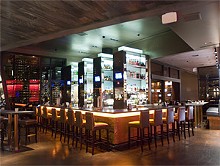 I wish more steak houses still let you choose your dinner from a big platter of raw meat. Not because this guarantees a better meal. Maybe, if you can judge good marbling, it improves your odds — though you remain at the mercy of whoever is working the grill that night.

Something about the ritual feels inherently right. More than anything else — more than clubby leather upholstery, more than career waiters decked out in tuxedos, more than a bottle of Bordeaux that costs as much as your first car — that platter proclaims, "This is not merely a restaurant. This is a steak house. We have weathered nouvelle cuisine and New American cuisine and the advent of the decent $20 bottle of wine, and on that day when the last molecular gastronomist is called to the great bubbling test tube in the sky, we will be here, serving thick, juicy steaks, baked potatoes and spinach. Those last two items à la carte, of course."

That said, in recent years the steak house has received a makeover. The stuffy, private-club aesthetic is out; slick modern design and — crucially — a keen interest in the origin of the meat on your plate are in. Chefs who made their reputation with distinctive styles, from old stars like Wolfgang Puck to new lights like Top Chef's Tom Colicchio, have opened striking new steak houses.

Now St. Louis enters the fray with Sleek, which opened in March between the buffet and Asia in the Lumière Place casino. The name is written as SLeeK, but after fighting the good fight against Microsoft Word's spellchecker while reviewing F15teen, I'm so. Very. Tired.

Sleek calls itself both a steak house and "ultralounge." One half of the space is the bar, with high glass shelves for the booze and a platform for DJs to spin. The other half, on the other side of the glassed-in wine "cellar," is the restaurant proper. Here the décor is modern without being overly hip, though the thumping dance music from the lounge is distracting. One drawback to the layout — the same as at Burger Bar and Asia, but more notable at Sleek, by far the swankest of the bunch — is that the restaurant opens onto the walkway around the casino floor, while the comfy, somewhat private, booths to one side of the dining room afford a view of...a carpet, a wall and the new underground walkway that links Lumière Place to downtown.

Your meal is likely to begin with a spiel by your server on who Hubert Keller is (voted one of the top ten chefs in America!), how much Sleek cost ($8 million) and what sets it apart (the best possible ingredients). The spiel is mildly annoying — because it is clearly practiced, but also because its subtext is, "And you should be grateful Sleek opened in St. Louis."

I don't blame the servers. In fact, service on my visits was very good, easily better than the other Lumière Place restaurants and more consistent than at the Four Seasons' Cielo. Courses were paced properly, the appropriate tableware was provided at the proper time and dishes were cleared with minimal fuss.

By the time you open the menu, your expectations should be fairly high — and the very high prices will ratchet them even higher. High prices and, in the case of the appetizers, strikingly small portions. I don't object to small portions. Quite the opposite. But even I was surprised when a $16 appetizer brought three canapé-sized crab cakes and a bowl of glazed edamame. At any rate, the crab cakes were moist and featured very little, if any, filler. The crab meat was peekytoe, full-flavored but not as sweet as the blue crab I prefer.

The standout appetizer was the duo of ahi tuna, which paired tuna tartare with thin slices of tuna seared to a perfect, purple-pink rare, but what made the dish for me was a tangle of what seemed to be very finely shredded and then flash-fried ginger, which gave the dish textural contrast and a mighty kick of flavor.

That old St. Louis favorite, French onion soup, sacrificed flavor for cleverness. The soup was served "deconstructed": There was a cup full of tawny broth thick with onions at the center of the plate; separate small dishes contained very small, thinly sliced bread and crumbled cheese. This struck me as pointless. The glory of French onion soup is the cap of bread and melted, broiled cheese. This set-up led to a sparse mixture of gooey cheese and incredibly soggy bread.

But you're here for the steaks.

You have a wide range of choices, both in cut and origin. You can have American wagyu beef from Idaho, or you can have real-deal Kobe wagyu beef from Japan. The latter costs $20 an ounce (three ounces minimum). Strangely, for a steak house of Sleek's level, neither the menu nor the servers advertise how any steaks are aged. The New York strip and rib eye I tried lacked the mineral, almost funky, depth that comes with dry aging.

Both steaks were very good, cooked precisely to my medium-rare order and then rested an appropriate length of time. The rib eye (an eighteen-ounce, bone-in whopper) was especially flavorful. Neither was perfect, though. The New York strip had a thin streak of gristle near one edge, while the exterior on the rib eye was rather lightly browned, robbing it of both texture and — despite its rich beefy flavor — the added depth of a good char.

Sleek offers a broad selection of meat, poultry and seafood entrées, and the kitchen thoughtfully features a tasting menu for vegetarians. For my out-of-steak experience I opted for the lamb chops. The two double-boned chops showcased excellent grilling technique, with a crisp, but not burnt, exterior and a tender, full-flavored interior. The quality of the meat was key because, as with the steaks, the chops were served with only a decorative sachet of herbs and a swirl of jus.

The à la carte sides were underwhelming. The French fries were pale and flavorless, and the steamed asparagus had been peeled all the way up to the tip, rendering it unbecomingly limp. I did like the spinach, fresh and simply sautéed. The mac & cheese has a creamy rather than cheesy texture, with diced ham adding some chew, while the flavor is utterly dominated by truffle oil and a few bits of black truffle. It was so decadent that I couldn't eat more than half.

Desserts run the gamut from chocolate soufflé and cheesecake to Coca-Cola sorbet. I liked the light, refreshing frozen Grand Marnier soufflé. I really liked the peanut-butter cheesecake, but this was removed from the menu between my first and second visits.

The wine list is very long, peppered with extravagant splurges and decent values, the latter especially evident in a brief list of half-bottles. The by-the-glass selection is lame, and the draft beer selection even more so.

I departed Sleek satisfied on the most basic level. It's a steak house, after all. The food is good and filling. If my palate was comforted rather than challenged, at least I didn't fret that the chef's creation would fail or that I'd regret my order.

For a restaurant in a casino, Sleek is a damn safe bet.