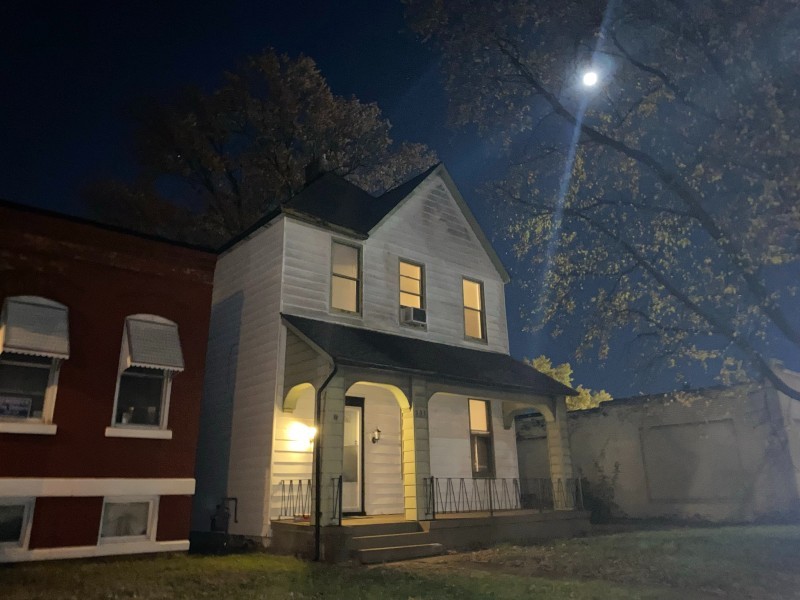 Months after publishing "The Fatal Tunnel," I received a tip from an unlikely source: my five-year-old son.

He was talking about the phases of the moon. Like many kids his age, he is obsessed with all things lunar. Like many parents, my mind was elsewhere.

"It's a waning crescent!" he declared one day, to which I replied "uh-huh."

"It's a waxing gibbous!" he declared another day, to which I replied "mm-hmm."

Then, it came to me.

I wondered how bright the moon was on December 12, 2019, in St. Louis. That was the night a decorated police officer fired eight shots, striking 24-year-old Cortez Bufford at least five times, after chasing him down in a pitch-black gangway between two homes — the fatal tunnel.

"Watch, when we get to the mouth of the alley, he's going to be running," Bufford's killer, Officer Lucas Roethlisberger, told his partner before exiting their police-issue Chevy Tahoe, according to Officer Martinous Walls' interview with investigators. Roethlisberger confronted Bufford outside of a BP in south St. Louis' Carondelet neighborhood because it looked like he was urinating beside the gas station, the officers said.

His prediction was right. Bufford ran. But if Bufford, who had been tased and beaten by St. Louis police five years prior, ran because he was scared of another violent encounter, his prediction was right, too. Video footage outside the BP shows Roethlisberger almost immediately pulling his gun. As Bufford fled, he and the Tahoe collided. Bufford fell to the ground, got back to his feet and kept running northwest on Bates Street into the neighborhood. He veered into a yard and tried to clear a fence in one gangway but couldn't. He scuffled with the officer, scratching him, and then he ran across the street. The officer followed. Bufford's life ended in the black hole of the gangway.

"How was your vision in that?" an investigator later asked Roethlisberger.

"I could see," he answered, about a month after the shooting. What the officer could see, he asserted, was Bufford pulling a gun from his crossbody bag and pointing it at him, causing him to fear for his life.

Under the Fourth Amendment, this "reasonable fear" can give law-enforcement officers license to kill, the courts have ruled again and again.

This would be dispositive of the Bufford case, unless there was a way to rebut Roethlisberger's account. Yet no one else reportedly saw what happened. And the only other person who was present — Bufford — is dead.

But what if an officer creates the situation that puts him in fear of his life? Could he really have seen what he said he saw? What were the visibility conditions? Is there any way to know?

An emerging mode of investigative reporting, "forensic journalism" has been taught outside of the United States for years. In Cyprus, it is offered as a "New Media" module at Eastern Mediterranean University. In India, trained forensic journalists, under the presupposition of being neutral and fact-based, can provide evidence directly to law enforcement and the courts.

A pioneer in this space is British citizen journalist Eliot Higgins and his Bellingcat website, which has probed the Malaysian Airlines flight disappearance and Russia's involvement in the conflict in Eastern Ukraine. Likewise, in the United States, journalists are increasingly using forensic methods to challenge official narratives. Newsrooms are adding forensics teams to their mix. The New York Times, for example, calls its unit the "Visual Investigations team." In 2019, Nieman Lab, a journalism think tank at Harvard University, predicted that video forensic reporting would become critical "in an era where impunity is an increasing norm, and human rights seem to be falling out of favor."

Pushing the frontiers of this evolving field, my colleague at the investigative journalism organization the Invisible Institute Jamie Kalven — who first uncovered the truth behind the case of Laquan McDonald, the Chicago teen whom now-convicted Officer Jason Van Dyke shot sixteen times in 2014 — and the UK-based human rights organization Forensic Architecture presented a yearlong investigation at the 2019 Chicago Architecture Biennial. Using new forensic techniques and on-the-ground reporting, they reconstructed the police shooting death of Harith Augustus, a local barber, in Chicago's South Shore neighborhood. Their investigation contested the police account that the shooting was justified and examined the aggressive policing that produced Augustus' death. In so doing, they extended the reach of human rights reporting and expanded what is knowable.

It was in that spirit, after publishing a nearly 8,000-word story about Bufford's death last May, that I knew there was more to know. There always is. And it weighed on me that the public might never find out what really happened, as attention on Bufford's case fizzles and a backlog of others collect dust at the St. Louis Circuit Attorney's Office — in the U.S. city with the highest rate of police killings in the country.

So, with the pro bono help and guidance of a forensic expert, I followed up on the story and undertook to test the official narrative of the incident.