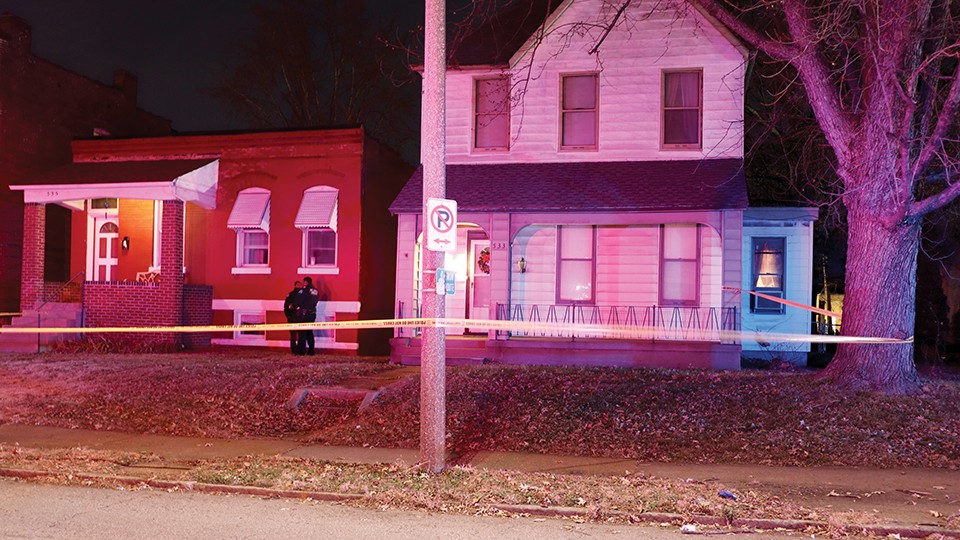 The credibility of Roethlisberger's account of killing Bufford is already poor. (Roethlisberger's attorney Jonathan Bruntrager declined on the officer's behalf to comment on this story, citing the police department policy to "not speak on the record about such matters.")

Roethlisberger originally said he thought Bufford had fired at him first, but Bufford did not fire at all.

He originally said he shot Bufford from the mouth of the gangway, but bullet casings, which tend to fly to the right and behind the shooter at a 45-degree angle, indicate he was well into the middle of the gangway, moving either forward or backward as he was shooting.

Roethlisberger's story is bolstered by the account his partner gave investigators. Their narratives lined up almost identically. There was, however, one notable difference.

When Walls stepped into the gangway that night and found Roethlisberger and the slain Bufford, he said, he "could not see."

"It was very dark," Walls said. In fact, Walls had to use a flashlight.

Police records indicate the shooting happened around 9:22 p.m. Walls did not enter the gangway until several critical minutes after the shooting — as 9:24 p.m. turned to 9:25 p.m. This new understanding of the timeline can be established by a time-stamped iPhone video that a resident, who did not wish to be identified, provided to the Invisible Institute. The video did not capture the shooting, but rather its aftermath.

By the time Walls made it to the gangway and rolled Bufford over, he and other officers said they saw a Glock 34 underneath his stomach.

Jeremy Bauer, a biomechanics and shooting reconstruction expert in Seattle, has testified in cases on both sides — for police departments, as well as the families of those killed by police. He reviewed photographs, the autopsy report and other records in the Bufford case at my request.

"The officer's got options for cover before committing to running into an unlit gangway," Bauer observed from photos of the scene. The options were the two houses on either side.

When he saw another shot of the gangway, littered with shell casings, he pointed out that the officer was "well in there." 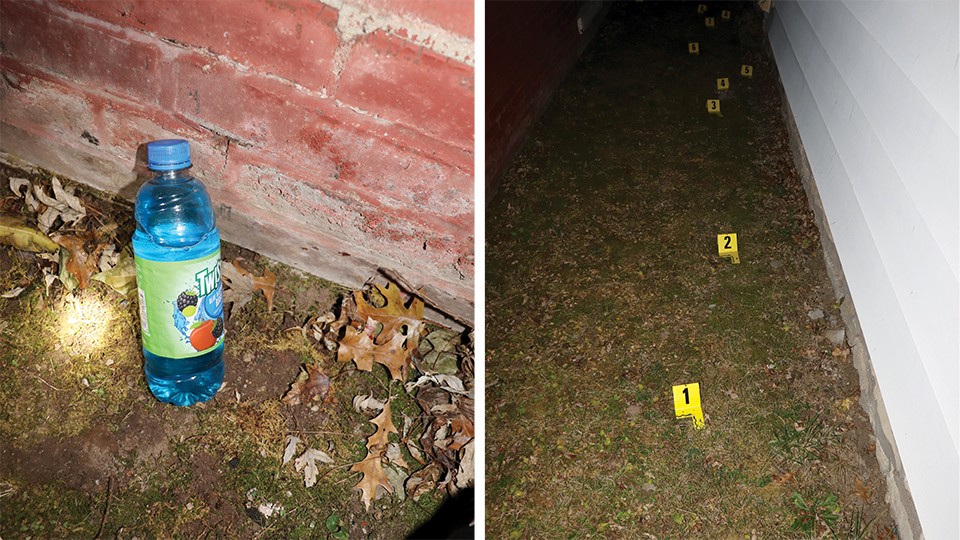 Over several conversations, I put to Bauer my nagging questions about the case. The largest looming inquiry was that of visibility in the gangway, but the more I pored over the investigative file, other messy details came to the surface.

One of them was Bufford's reported collision into the front passenger panel of the police SUV, which happened early in the foot chase. It was an important piece of the narrative to examine because this is where Walls, who was driving the Tahoe, and Roethlisberger, who was on foot, said they observed the extended magazine of Bufford's pistol protruding from his bag when he fell to the ground — establishing "reasonable fear" well before they entered the dark gangway.

It is noteworthy that Walls and Roethlisberger were first interviewed about a month after the shooting and were aligned on this memory. Yet, another nearby officer who witnessed the collision and was interviewed the same night as the shooting did not tell investigators he saw any gun when Bufford was "knocked" to the ground, got back on his feet and ran away.

I found a Tahoe in Chicago to take some measurements, and I discovered that Bufford would have had to have been hit and tossed about 15.5 to 17.5 feet away from the vehicle for the driver of the Tahoe to be able to see his gun in his bag.

With a Tahoe, you "don't necessarily go on top" — you'd likely be projected in the direction the vehicle was moving. "A 15 foot projection equates to an impact of between 15 and 18 miles per hour," Bauer said.

Stranger still, Walls and Roethlisberger said that Bufford ran into the Tahoe, not the other way around. In that scenario, Bufford would not have been projected at all, according to Bauer. He would have fallen more directly to the ground, further limiting Walls' ability to see Bufford's bag and the alleged gun magazine.

If Walls did not see Bufford's gun magazine, the police radio indicates one of the officers thought, or at least said aloud, that Bufford had a gun.

"North, north, north! He's got a gun ... Bates, he's running north, he's got a handgun," an officer's voice calls out over the radio.

Roethlisberger later told investigators he thought Bufford was carrying because of the type of "man bag" across his chest and that it looked heavy.

But is the belief that someone has a gun — which Bufford, in any case, would have been legally carrying — enough to establish an officer's reasonable fear for his life? 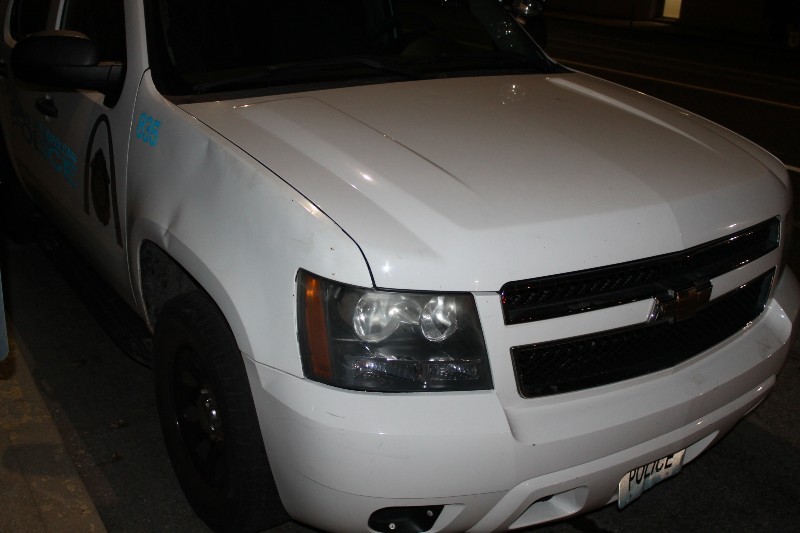 Another detail that bothered me was a drink bottle that appeared in police photographs at the scene. The supplemental report noted, "By the fence, the Detectives observed an unopened sports drink."

It was the type of drink Bufford's family knew him to buy, and he had purchased a drink at the BP gas station just before the confrontation and chase. It was hard to believe that Bufford could have run with the bottle without dropping it, throughout the encounter, including the collision with the police Tahoe. Or to understand how he would have the time or presence of mind to place the bottle neatly upright by the fence before allegedly pulling out a gun. It seems more likely that the bottle was in his pocket or his bag — and someone else took it out after the fact.

But a closer analysis of Bufford's black Lacoste crossbody bag raises doubt about whether he could have been carrying the gun that was allegedly found beneath him at all. The Lacoste bag was fairly small and slim. The police did not return it to the family, so we were not able to take measurements, but Bufford's mother, Tammy, estimated the bag was 8 inches tall by 5 inches wide. A similar style of the same brand bag measures 8 inches by 5.5 inches. But by either estimation, the gun — a Glock 34, which according to the manufacturer is 8.82 inches by 5.47 inches — would have either been too wide or too tall for such a bag. So why would Bufford walk around with a bag that's too small for his gun?

A police lab report of the gun was negative for fingerprints. It is clear from photographs of the scene that the gun changed locations. In one photo, the bloody gun is on the ground, partially obscured by leaves. In another, it's flipped over and placed inside what looks like a box. Bauer has found there is little to no consistency in how scenes are documented in instances of officer-involved shootings. 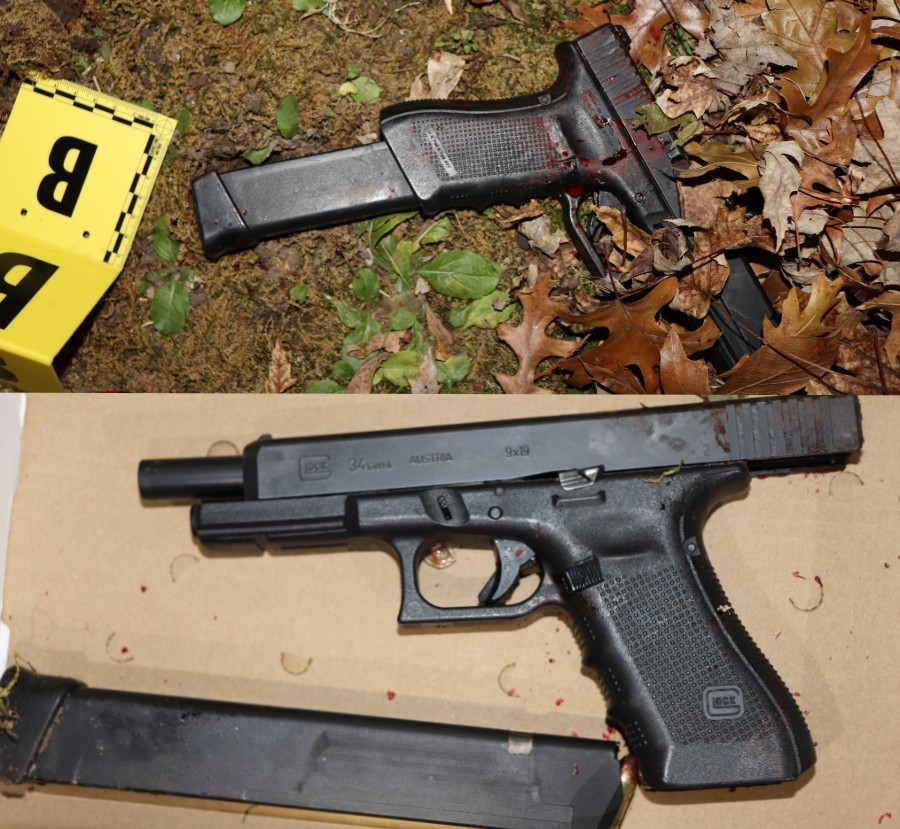 "This is one of the problems in handling the gun, or any evidence, in the field," Bauer said. "What if there were prints on the gun? They can smear the prints and alter other evidence by handling evidence in the field. In fact, they could even be destroying evidence that could have helped them."

Meanwhile, the clip of the gun appears to have blood on it in police photographs, calling into question how it could become bloody if it was inside the gun. And if it wasn't in the Glock, why would Bufford reach for a pistol that had no clip in it? 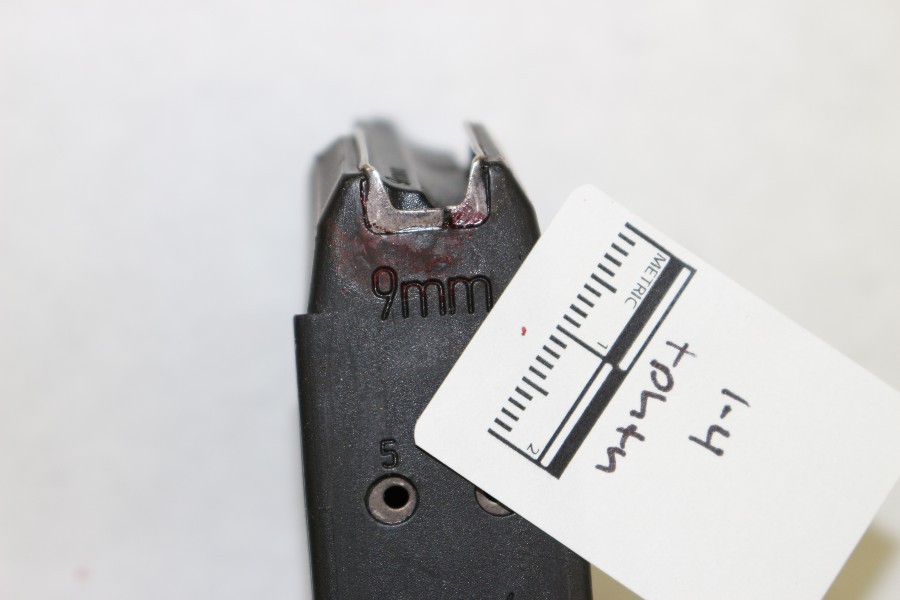 Bauer also reviewed the medical examiner's report for any takeaways about Bufford's position when the bullets hit his body. Of the eight shots fired, five, possibly six (a graze) of them hit Bufford's body, front and back, from his left fingertip to the right thigh and upper back. Three shots to his face and head, one in each cheek, and the fatal shot to the upper left forehead.

While it is very hard to assign an order to the shots, Bauer noted that it appears Bufford was likely "turned away from" the officer initially. Based on the description of wounds and their paths, the right side of Bufford's right thigh and his upper back were facing the barrel of the gun. "His back is to the officer," Bauer said.

It also appeared to Bauer that Bufford was fairly upright when he was hit with the first two shots, then "the head and face shots were the later shots." They appear more downward, indicating Bufford, already shot, may have been turning toward the officer when he was shot again in the right cheek, left forehead and left cheek.

"He's standing up, hit on the right, pivots to the right and puts his head down, potentially guarding, like in a hail storm," Bauer described while studying the report.